Home History Book Review: 40 Thieves on Saipan: The Elite Marine Scout-Snipers in One... 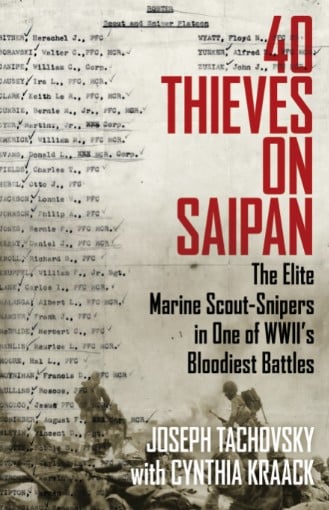 “Uncommon valor was a common virtue” in the Pacific Theatre, and 40 Thieves on Saipan is the untold story of an especially valor-filled and daredevil gang of Marines.

Joseph Tachovsky knew his father was a Marine, but it was not until his father’s funeral that he discovered Lieutenant Tachovsky (“Ski”) was commanding officer of the elite scout-snipers nicknames the “Forty Thieves.” These top men were hosed for their willingness to defy rules and beat all comers. When Marines got into fights, the loser went to the hospital, and the winner went to the brig and those were invited into Ski’s band of Thieves.

This book is written by the son of the daring leader of the 40 Thieves on Saipan and is a thrilling story of men whose unique skills in stealth and deadly hand-to-hand combat helped gain a critical victory in the battle of Saipan, Emperor Hirohito’s “Treasure.” Joseph has woven together this inspiring narrative from exhaustive interviews with the surviving Thieves, mementos from his father, and extensive documentary records.

Some of the methods these Marines used in their fight were not ordinary:

About the authors: Joseph Tachovsky is the son of Lieutenant Frank Tavovsky, commanding officer of the 40 Thieves. Tachovsky knew nothing of his father heroic past until his father’s funeral in 2011. A eulogy was given in which a man recounted a story wherein Lieutenant Tachovsky saved every man in our unit from a Japanese tank. This sent Joseph on a journey to discover everything he could about his father and the 40 thieves. Tachovsky is a graduate of the University of Minnesota.

Cynthia Kraack’s literary skill breathed life into the stories and experiences of the 40 Thieves. She holds a B.A. in journalism and history from Marquette University, a master’s degree from the University of Minnesota, and an M.F.A. from the University of Southern Maine. She is the author of five novels, including the award-winning The High Cost of Flowers.