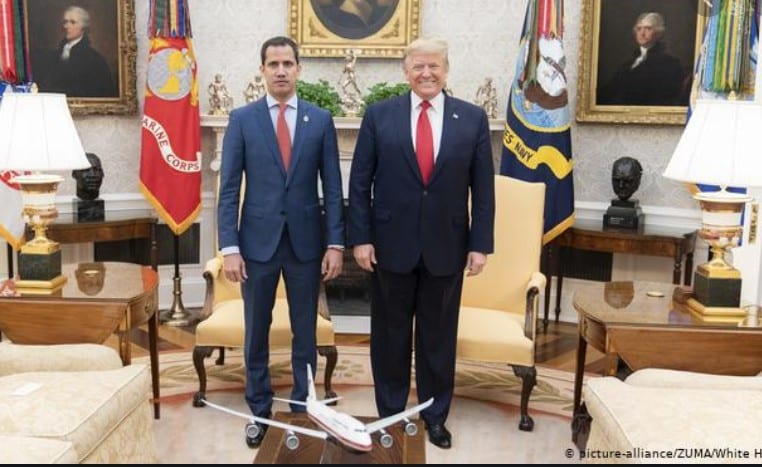 Russia Today: The private US military firm behind the bungled coup in Venezuela was kept in the dark by Juan Guaido as he “misled” the operation and made poor decisions, a captured ex-US soldier said during interrogation.

Juan Guaido, the Washington-backed self-proclaimed ‘interim president’ of Venezuela, muddied the waters during the failed mission supposedly aimed at ousting President Nicolas Maduro. That’s according to Luke Denman, one of the two former US Green Berets accused of participating in the failed plot, who has shed more light on the mission in a new interrogation tape.

Guaido, thought to have hired Florida-based private military firm Silvercorp USA to spearhead his coup plans, “misled quite a few people,” the American captive could be heard saying in the video, aired by Venezuelan state TV.

At this point, seeing everything that I have, I believe that Silvercorp, as well as many others, have been greatly misled by Mr. Guaido.

Previous interrogation tapes and media leaks indicate the opposition leader was in touch with Jordan Goudreau, a US special forces veteran and head of Silvercorp. Venezuelan investigators earlier revealed that Goudreau had met Guaido at the White House during Guaido’s trip to the US.

He “didn’t have any reason not to trust Guaido,” Denman said before unloading on the ‘interim president’. “I believe if anybody has made an incorrect decision, it’s Mr. Guaido,” the former Green Beret stated without elaborating.

Denman and another American, Airan Berry, said they were tasked with training Venezuelan émigrés in neighboring Colombia ahead of their invasion. Embedded with other guerillas, they were then to sneak into Caracas, kidnap Maduro, and secure an airfield on Venezuelan soil to “put [him] on a plane.”

hey landed on a resort coast in Venezuela earlier this month, apparently hoping for a rendezvous with local anti-government forces. However, the small invading group was met with heavy resistance, with local security forces killing most of the intruders and capturing their hardware.

Detained US ex-soldiers said they were tasked with securing an airfield in Venezuela in order to put President Nicolas Maduro on a plane after toppling him. The men were charged with plotting a coup against the government.

American national Luke Denman told an interrogator that Jordan Goudreau, a US special forces veteran and founder of private security firm Silvercorp USA, had proposed that he take part in removing Maduro from power between late November and early December of 2019. Denman did not sign any papers, but during a “casual conversation,” Goudreau provided him with “some vague mission guidelines” about training armed opposition fighters and “putting Maduro on a plane.”

We were, for all intents and purposes, invading a country, taking military and police targets, and capturing the sitting president.

Denman explained that he was tasked with training Venezuelans in neighboring Colombia and, after they had “secured their targets,” with securing an airfield to “put Maduro on a plane.” From there on, Denman was going to stay on the airfield to receive “incoming humanitarian aid” and await further instructions, he said.

When asked why the operation had started from an area dominated by drug trafficking, another detained American, Airen Berry, claimed that the group “didn’t understand or know that we would be travelling through this narco area.” He said that the route was known by renegade Venezuelan Army captains Antonio Sequea and Victor Pimenta (who joined in the planned coup and were then also detained) and “possibly” by US-backed opposition leader Juan Guaido.During the interrogation, Denman also revealed that the code word ‘jackpot’ was used in the group’s notes to “talk about the person we’re after – either a hostage or a high-value target.”

The US openly supports Guaido, who was elected by the opposition-controlled parliament as ‘interim president’ of Venezuela in January 2019. Maduro has repeatedly slammed Guaido’s actions as illegal and has accused the US of plotting to oust him from power.Goudreau acknowledged to Reuters that Denman and Berry are “working” with him. US President Donald Trump, Colombia’s Foreign Ministry, and Guaido have all separately denied having any ties with the plot against Maduro.

In March, the US Department of Justice (DOJ) indicted Maduro and several other former and current Venezuelan officials for corruption and “narco-terrorism” – the intention to “flood” the US with cocaine. The DOJ offered up to $15 million for information leading to Maduro’s arrest or conviction.

US-backed Maduro opponent Juan Guaido met with the head of the notorious Silvercorp, the American company believed to have been involved in the failed attempt to kill the Venezuelan president, a captured plotter has alleged.

Jordan Goudreau of Silvercorp had met with Guaido, the self-proclaimed interim leader of Venezuela, in Washington DC in March. That’s according to the testimony of Captain Antonio Sequea, who confessed to being one of the firm’s contacts on Venezuelan soil.

The video, shared with the media by Venezuelan Vice-President Jorge Rodriguez, shows how Sequea revealed that the Silvercorp head – a former Green Beret – first “distanced himself from us” but then resumed communication and brought some “good news” to the apparent Guaido camp.

We spent some time without telephone contact, then he reconnected and informed me that he was in a meeting with Guaido at the White House, who had been reaffirmed again by a military adviser about the departure of the Venezuelan government.

The detained captain said the news of the low-key meeting encouraged them to proceed with their plan to oust Nicolas Maduro, the legitimate president of Venezuela. “That gave us a little more strength, it motivated us,” Sequea acknowledged, adding that the Silvercorp head was advising the plotters militarily, giving them “the sense of security.”

Silvercorp USA, a Florida-based private military firm, appears to be heavily involved in the botched coup in Caracas, it previously emerged. Its members, US citizens, were among guerillas that crossed into Venezuela last week but were captured by government forces before they took any action.

While Silvercorp boss Jordan Goudreau – said to be a member of Donald Trump’s security detail – confirmed to the media that “those are my guys,” Juan Guaido, the US-backed, self-proclaimed interim leader of Venezuela, predictably disavowed them, saying he had “no relationship nor responsibility for any actions” of the US mercenaries.

However, the Washington Post leaked what appears to be an incriminating contract signed by Guaido and Silvercorp. The 41-page document promises a hefty $212.9-million reward for the capturing, detaining, or “removal” of President Maduro, thus installing Guaido in his place. That was partially confirmed in an interrogation tape by one of the American mercenaries captured by Venezuela.

It also allowed for targeting anyone deemed to be “armed and violent colectivos” – a degrading term used for any working-class person, including trade unionists and pro-government protestors.

On the heels of the failed plot, Caracas charged two Silvercorp mercenaries, Luke Alexander Denman and Airan Berry, with terrorism, conspiracy, illicit trafficking of weapons of war and [criminal] association. Maduro claimed evidence will soon emerge that US President Trump himself ordered the plot.

However, Trump denied having anything to do with the affair, saying he would have done things differently, ordering a full “invasion” instead of a covert operation.