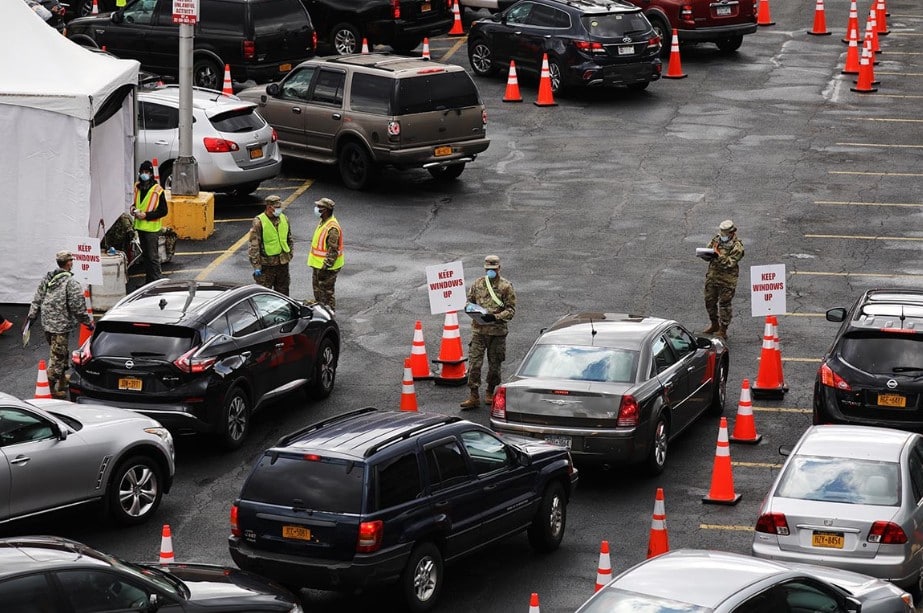 Mike’s comments: In the fashion of a true criminal slumlord, Donald Trump is screwing over members of our National guard units that have given selflessly to the effort to deal with the effects of Covid-19.

His move to deactivate them one day short of the time needed to get federal benefits from their current service is reminiscent of his cheating skilled tradespeople out of their rightfully earned payments for doing work in his building projects.

This is disgraceful though not surprising given the fact that he has absolutely no feelings for anyone other than himself.  This is entirely consistent with being a sociopath and a malignant narcissist.

How our national government treats our service personal and veterans has long been a national disgrace, but previous administrations, at least, tried to keep it secret. As usual, Trump does his dirty work in plain sight. In a way, that is more honest but it is unlikely that the MSM will pick up on this story and most Americans will know nothing about it.

The National Guard sent guidance to state governments on Thursday to wind down troops’ federal deployment for coronavirus relief work on June 24, even as administration officials say an extension is still under discussion.

The guidance, obtained by POLITICO, says Guard members’ federal mission, known as Title 32, “should culminate no later than 10 June 2020” to allow for two weeks of self-quarantine before transitioning back to the community.

It also notes that Guard members must be allowed to take the paid leave they earned while serving on the front lines of the pandemic response, which state officials say would prevent them from immediately transitioning troops to state active duty and hamper their public health work.

A National Guard spokesperson confirmed the planning guidance went out, telling POLITICO it’s a routine procedural step that does not preclude a future announcement of an extension.

“One has nothing to with the other,” the spokesperson said. “Whenever an order is issued, a set of implementing orders are issued as well.”

The spokesperson added that the National Guard is “currently working with DoD and FEMA to determine the best ways to care for our Guard men and women in this unprecedented response.”

But state officials who have been pushing the federal government for an extension say they did not receive similar guidance ahead of the original expiration date of May 31, and they are taking the new missive as an ominous sign.

“We’re incredibly disappointed that the administration appears to be allowing the Title 32 mission to expire,” said Casey Katims, the federal liaison for Washington Gov. Jay Inslee. “It will disrupt our state’s work in combating Covid — including our contact tracing efforts, our testing sites, and our food bank operations. It will also disrupt the lives of the National Guard members.”

POLITICO first reported that Trump administration officials, on a May 12 interagency conference call, described the planned June 24 cutoff as a “hard stop,” and noted that it would leave thousands of Guard members just one day shy of qualifying for federal retirement and education benefits. Administration officials also discussed the hardship the end of the deployments would cause for states who are depending on the Guard for vital health services as they attempt to safely reopen amid the pandemic.

Retired Brig. Gen. J. Roy Robinson, president of the National Guard Association, told POLITICO that while he still expects the Trump administration will issue an extension, he understands why states are rattled.

“There’s a lot more unknows than knows, and that’s a real problem,” he said. “So I sympathize with the state leaders on not having clear guidance on what’s going to happen. And I sympathize with Guardsmen and women out in the states [who] are just trying to do their job. They’re stuck between a governor telling them how much of the mission is still left to complete, and a federal authority saying, ‘Hey, we’re done.’ It’s not a good situation.”

While the June 24 end date would impact nearly every state and federal territory where more than 40,000 Guard members are currently leading relief efforts — decontaminating nursing homes, setting up field hospitals and even serving as poll workers in elections — it would hit Guard members especially hard in the three earliest states to receive authorization for the federal mission in late March. Thousands of Guard soldiers and airmen in California, New York and Washington state will fall just one day short of the 90 days needed to secure credits for early retirement and tuition assistance under the Post-9/11 GI bill.

Katims said the move would also force Washington to have to recruit and train a whole new set of National Guard members in contact tracing and other sensitive work to replace those currently performing those duties.

“It’s going to cause a disruption to our work, and disrupt the lives of about 1,000 other National Guard members,” he said.

On Wednesday night, several Washington lawmakers called the situation “unacceptable” in a letter to President Donald Trump asking for the end date to be pushed back until July 31.

The letter, provided to POLITICO, warned of the consequences of “an abrupt and harmful end date” and pleaded for an extension “to ensure members of the National Guard can continue to serve their communities and keep Washingtonians safe.”