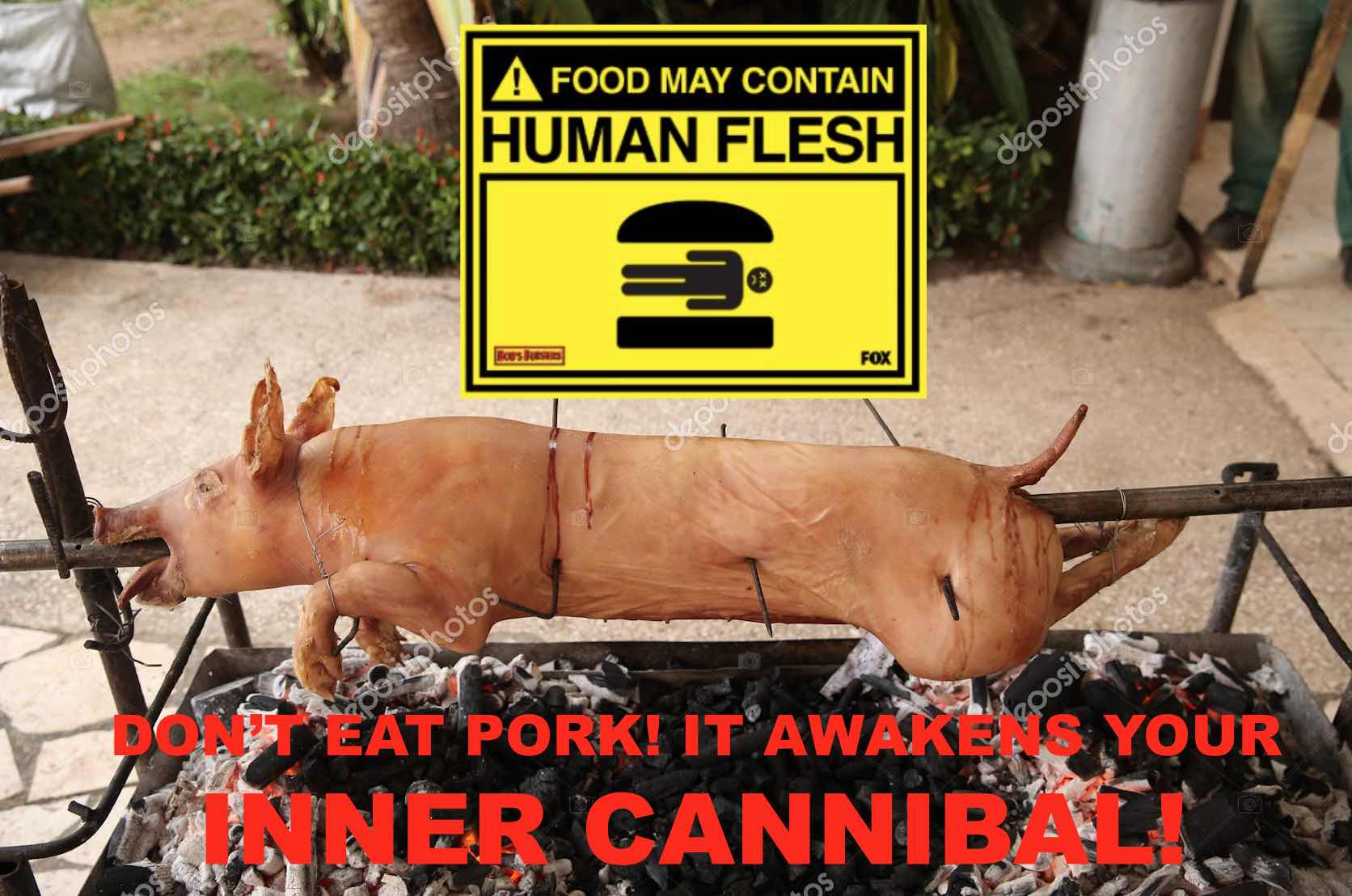 “Mmm! The pungent smell of roasting pigmeat wafting across the park on a perfect afternoon as spring gives way to summer. Must be Memorial Day! All hail our fallen heroes, and pass the bratwurst!” -typical American quasi-cannibal indulging in watered-down ritual sacrifice

“I’ve been to rice boilings and I’ve been to pig stickings, and the rice boilings had better vibes.” Stephen Gaskin’s celebrated aphorism influenced the hippie generation and helped inspire the trend toward vegetarianism.  It made a big impression on me when I was going through my teenager vegetarian phase in the 1970s.

But what is it, specifically, about the “pig stickings” that gives off a noxious odor of bad vibes? Here’s a clue: The most memorable “pig sticking” line in literature occurs in Lord of the Flies: “Kill the pig! Bash her in! Kill the beast! Cut its throat!” The frenzied gang of filthy boys, shipwrecked on a proverbial desert island and reverting to savagery, ritually intones the bloody chant before slaughtering pigs…and then sacrificing humans, beginning with a plump young bespectacled nerd nicknamed Piggy.

Lord of the Flies insists on the connection between pig-stickings and human sacrifice. Its Pacific Island setting reminds us that Native Hawaiians traditionally made the same connection: The word for human flesh in the ancient Hawaiian language is “long pig,” because human flesh, as cannibals universally attest, tastes almost exactly like pork. (Having no interest in verifying this personally, I am happy to take the cannibals’ word for it.)

But don’t blame Hawaiians—it wasn’t just their ancestors. If evolutionary scientists are right, even “roughly in the ball park” right, the ancestors of pretty much all present-day humans were periodically eating human flesh for tens if not hundreds of thousands of years. Why? Because those who ate the flesh of enemies, sacrifice victims, and starvation victims would have a better chance of surviving famines to reproduce and bequeath their “long pig” loving genes to posterity. The tendency to revert to cannibalism when you are starving periodically crops up in modern civilized humans, most famously in the cases of the Donner Party and Uruguayan Flight 71, suggesting that atavistic cannibal proclivities can bubble up to the surface in the right, or wrong, circumstances.

In cultures that practice it, eating “long pig” generally occurs after ritual human sacrifice. In one common form that occurs in both Africa and the Pacific Islands (the two most unrelated genetic groups on earth) the ritual sacrifice can happen on the battlefield, where the greatest enemy warrior is killed so his heart or liver may be eaten in hopes that the eaters will partake of his courage. This common form of sacrificial cannibalism drives the plot of Herman Melville’s autobiographical novel Typee.

Keeping the above in mind, I don’t think it is a coincidence that Americans collectively raise a thick pungent cloud of roasting flesh, no doubt pleasing to the nostrils of Yahweh, as their way of honoring their fallen warrior heroes. They are symbolically devouring those heroes’ charred and mangled bodies—partly in hopes of partaking of their courage, but mostly as a schadenfreude-laden celebration whose unconscious guiding idea is: “I’m sure glad it was those other guys who died on the battlefield and not me; it sure is nice to be here with my family  having a backyard barbecue and saluting somebody else’s human sacrifice!”

(Note: If you would like to further explore the ideas briefly sketched in this essay, check out the work of the late, great French-American thinker René Girard.)