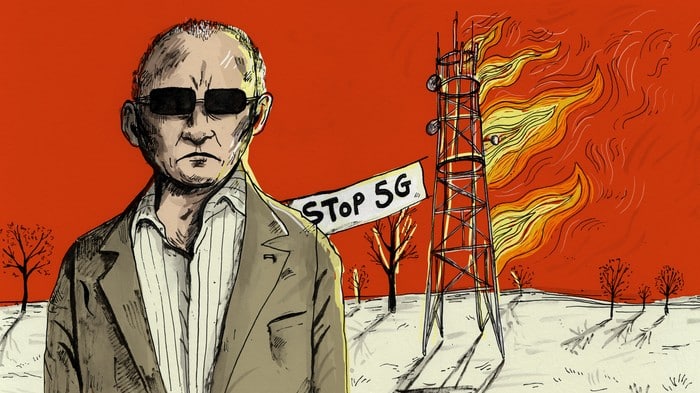 Does your dad spend his time in quarantine watching livestreams of men in fields ranting about the dangers of frequencies? Does every dinner table conversation roll back around to how Wi-Fi is killing our brains? Does he joke (well… kind of) about strategically hoofing down your closest lamppost in the middle of the night?

Then chances are he’s part of the growing number of dad-truthers fuelling the anti-5G conspiracy theory.

In 2019, my dad was invited to a 27,000-strong Facebook group that sets out to “expose” the effects that 5G has on our health. The group features an extensive amount of middle-aged dads debating whether to put tinfoil on the walls before the wallpaper itself.

Soon, what was a Labour-supporting working-class dad of three had turned into a tech-obsessed truther. He began to share, comment, and openly debate (see: argue) with other dads, who all seemed to agree on just one thing: 5G was threatening to kill off their family, causing mental health issues, cancer, infertility, Alzheimer’s, even autism. Oh – and yes, coronavirus. It causes that too.

The movement against 5G began to gain momentum in late-2018 after major mobile networks started to roll out 5G trials around the world. Since then, it’s turned into a phenomenon, seemingly mostly among British, middle-aged dads who spend half their evening scrolling on Facebook, looking for action to spice up their ever-so-ordinary lives. Amid the arguments, the group share tips on how to protect themselves and the best field meters to detect harmful frequencies.

To find out exactly why dads are so obsessed with this stuff, I requested to join one of the more prominent Facebook groups, Stop5GUK. But in doing so, I truly went down the rabbit hole. The anti-5G movement is a world of people willing your dad’s money to be diverted into the fight against 5G. One man in particular looks to be leading the charge.

Mark Steele is a prominent member on the Facebook group, and his videos – where he’s normally seen sporting dark sunglasses and a thick Newcastle accent – are shared around to the group’s members daily. In the videos, the self-described non-indoctrinated scientist and weapons expert, says stuff like “5G is a killer” and claims 400 people have died from what he calls the 5G genocide. The members seen promoting him and sharing his videos are normally the group’s admins; they decide who stays and who goes, and have been seen to kick people out of the group if they criticise Steele.

But why is Steele so important? The answer, like many things in this life, is money.

After scrolling through the Facebook group, I was led to a fundraising page on GoFundMe (name: 5G IS GENOCIDE SUPPORT THE LAWFUL RESISTANCE) which was set up in late 2018 and had gathered almost £8,000. The campaign had no specific motive other than to “support the resistance” against 5G. This also isn’t the only instance of Steele asking for campaign money from the average dad who is a bit worried about 5G.

I subsequently found another campaign with Steele’s name on, collecting money to enable his legal team “to bring the countries first test case against Gateshead Council”. The description for the campaign didn’t really say… anything. Yet it had raised almost £20,000 and had 529 supporters behind it.

I spoke to a member of the group, who told me he had not heard anything more from the campaign after donating on CrowdJustice. Another member, Jasper, told me he’d previously seen Steele talk on 5G at an event in London last year, where musician-turned-activist Sacha Stone was promoting an anti-radiation tool.

These anti-5G tools pop up everywhere on the Internet and can be anything from £200 paint, to £70 umbrellas, to £900 router-looking devices – many which lack the science behind them. Stone was trying to flog his product for around £500, which is where Jasper’s suspicions with figures within the anti-5G movement began.

After speaking to Jasper, I wondered what else I could find out about Mark Steele, so I did the classic investigative technique: I typed his name into Google. Here, a link to the British Library Archive stood out. It directed me to a newspaper story taken from the Newcastle Evening Chronicle, written in November 1993, which claimed Mark Steele, aged 33, from Percy Gardens, Gateshead, was convicted of shooting a teenage girl, leaving her on life support. No one on the Facebook group had posted about this, and if they had, it’d been quickly deleted.

I questioned whether the newspaper article was simply someone else, but upon discovering further information on Steele, it seemed unlikely. The government page belonging to his company, Reevu, confirmed Steele was born in 1960, and a Chronicle Live story taken from his 2018 trial confirmed he still lived at Percy Gardens.

I was not the first person to see the newspaper article. Annie Logical, another known anti-5G campaigner, had previously tried to discredit Steele by claiming he had connections to Gateshead Council. Afterwards, she was branded a “deluded nutcase” and a “witch” by members of SUN – a donation-led website called Save Us Now (SUN) which claims to be a political movement against 5G, and is linked heavily to the Facebook group Stop5UK, with many of the admins sporting SUN avatars.

Based on the available crowdfunding links, Steele has raised almost at least £30,000. I wondered if my dad had been one of the donors. Other members of the group, like Jasper, had donated and later found out Steele was not who they thought he was, but were not able to speak out due to the group’s admins, so continued to be quiet. One of the slogans behind the 5G movement is to “question everything” – but it seems many members of the group had been shut off from doing so with Steele.

Much like flat earthers, or that strange period in the late 90s where conspiracy theorists put tinfoil on their heads, not everything in the 5G truther community is as it seems. That’s evident in the fact a radiation watchdog recently confirmed 5G is not currently known to pose a health risk – despite what groups like this say. So how do conspiracies like this start?

Conspiracy theory expert and author Andy Thomas told me: “When obvious gaps are left in public knowledge, it is inevitable that people have to fill them with their own speculation. Some people go further than others, of course – some would argue sometimes too far.”

With Facebook dads continuing to tune into Stop 5G groups in their masses, it is a cause for concern that many of them are willing to hand over thousands of pounds. If that’s you, or your dad, or someone you know, perhaps think twice about it. Unlike 5G, you can never be sure about the risks.