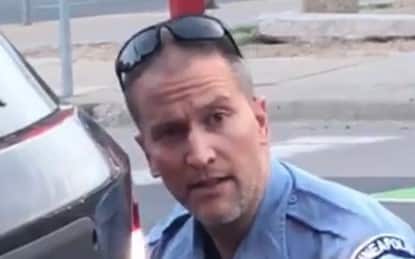 Daily Beast: A black man has died in Minneapolis after a disturbing video showed a police officer kneeling on his neck, according to The Washington Post.

These are the names and badge numbers of the two officers responsible:

The man, who hasn’t been identified by police, can be heard shouting in the video “I cannot breathe! I cannot breathe!” and “Don’t kill me!” The Minneapolis Police Department confirmed early Tuesday that the man, who is believed to be in his forties, died of a “medical incident” after police responded to a report of a forgery.

The statement said the man “appeared to be suffering medical distress” so he was transported to hospital, where he later died. In the video, witnesses can be heard telling the officer to get off the man’s neck.

One said: “You’re going to just sit there with your knee on his neck?” Another asked: “Did you kill him?” Darnella Frazier, who shared the video on Facebook, said: “The police killed him, bro, right in front of everybody.” The FBI and state authorities are reportedly investigating the death.