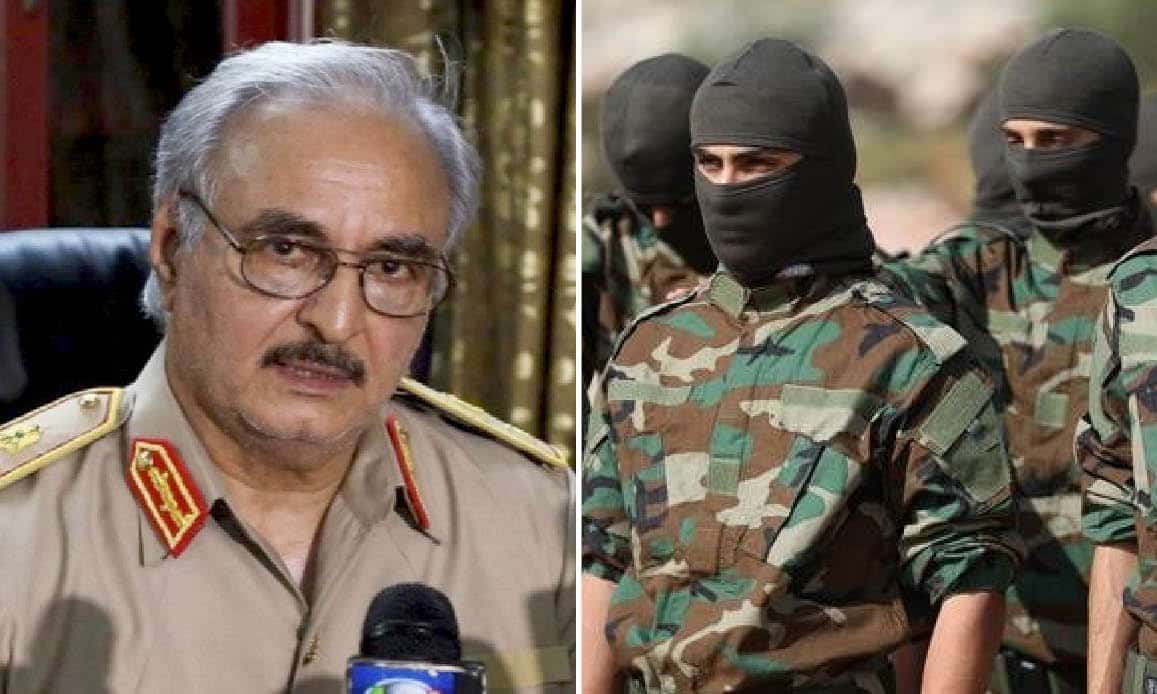 Tripoli can thank the mercenary Jihadists of Turkey if it has managed to repel the siege of the Libyan National Army’s general Khalifa Haftar, now politically rejected in his announced coup also by the government of Tobruk that controls Eastern Libya (Cyrenaica).

This is tremendous news for all Mediterranean countries such as Italy, as the factions of Sunni Islamic fundamentalists enlisted by Turkish President Recep Tayyip Erdogan to help ally Fayez Al Serray, president of the Government of the National Agreement that controls the Tripolitania, thus become a point of reference in the struggle for power in Libya.

Since the removal of dictator Muhammar Gaddafi, planned in 2011 by NATO countries as part of the destabilization projects in the Middle East initiated by US President George Bush and culminating in the Arab Springs of the Barack Obama administration, Libya has been torn apart by a civil war that he lived moments of tranquility and serious intensity in last year.

In April 2019, Haftar’s troops, military leader from Cyrenaica and Benghazi, launched an offensive against Tripoli to attempt an unlikely conquest of the country around which billionaire world interests revolve around oil and gas fields.

This action was initially blamed by Russia, the main ally of the LNA leader, who then found herself forced to support him for reasons of geopolitical strategy, above all after Turkey’s entry into the conflict in December-January 2019.

But in recent days, Marshal LNA has made two very heavy defeats. The first from a military point of view due to the loss of various positions near Tripoli and in particular the Al-Watiya air base, conquered in 2014.

The second, much more serious, occurred in the political field due to a position taken by the Libyan parallel government of Tobruk which, in fact, had always openly or tacitly supported Haftar’s initiatives. The Benghazi leader had tried to win consensus among the Libyan population in an audio message issued for the end of Ramadan with which he had praised Jihad saying that “a holy war against the Turkish invader” was underway. But this was not enough to convince politicians.

«Members of the East Libya-based parliament on Monday rejected an attempted coup by the warlord Khalifa Haftar» MEMO (Middle East Monitor) website writes, giving important news but also making it clear that it doesn’t have too many sympathies for the marshal.

«This came in a statement issued by 11 prominent members of the Tobruk-based parliament in which they stressed support to a peace initiative proposed by its speaker Aguila Saleh. The parliament “fully supports Saleh’s initiative as a final political solution to the Libyan crisis.”» further reads.

«The lawmakers called on all sides to accept the initiative, asserting it comprises “a mechanism of selection and decision-making, a fair distribution of wealth between regions and the appointment of a new committee of experts to develop a consensual constitution.”». Notably, the parliament currently holds its sessions with only some one-fifth of its 200 lawmakers.

Saleh, a former Libyan president from 2014 to 2016 and current president of the Libyan House of Representatives in Eastern Libya, made his proposal already towards the end of last April, however, obtaining in response the Haftar declaration which declared himself the only leader of Libya by announcing a coup to justify even more massive attacks against Tripoli.

This declaration was contested by the whole world, engaged with the UN and the European Union to seek a peaceful solution to the civil war. Even Russia and France, historical allies of the Benghazi marshal, blamed him. So much so that the Kremlin imposed a truce lasting a few hours as always …

This is why the position of the political leaders of Cyrenaica takes on a decisive value which should induce Haftar to return to sit at the table of peace talks for a Presidency Council as hoped for by the Berlin Conference.

THE RUSSIANS LEAVE THE CONFLICT AREAS

Also because the same Russian military forces, present in Libya in an unofficial way with the Wagner contractors, have for days moved away from Tripoli and the conflict areas in an evident gesture of withdrawal that should induce LNA to do the same.

«In the past two days, LNA forces have withdrawn from some positions in southern Tripoli in what they described as a humanitarian gesture. Forces allied to the internationally recognised government re-entered some of those areas» adds MEMO

LNA spokesman Ahmed Mismari has always denied that foreigners were fighting with their army (also supported by Sudanese and Chadian mercenaries). But the presence of Russian contractors has been widely documented by diplomats and journalists.

In addition, “on Monday the Libyan army (GNA – ed) took over the strategic air base of Al-Watiya. It is second only to Mitiga international airport. It had been captured in 2014 by Haftar, who used it as headquarters for attacks on the legitimate government» writes MEMO again giving the news of 12 bombings carried out by the LNA artillery against the Mitiga airport, as reported by the Anadolu agency, to be taken with caution since it belongs to the Turkish government.

It It was the commander of the Benghazi air force, Saqr al-Jaroshi, to announce in recent days “the largest air campaign in the history of Libya” relying on 8 fighter bombers (6 MiG-29 and 2 Su-24) previously supplied to the Russian air force.

THE THREAT OF JIHADISTS FOR ITALY AND EUROPE

These news is certainly positive in view of a peaceful evolution of the Libyan conflict, which has so far made the migration flows to Italy unmanageable, one of the sources of income of the tribal clans affiliated to the two opposing armies, but they are terrible in terms of rooting of victorious Jihadists alongside Al Serray’s GNA.

The dangerous and ferocious Turkish mercenaries were recruited from Ankara with pharaonic salaries for the Middle East of $ 2,000 a month thanks to the financial support of the wealthy Qatar in a close alliance between Muslim Brotherhood.

In these paramilitary forces, as demonstrated by the intelligence of Haftar, at least 229 international wanted for terrorism of jihadist matrix operate: as exponents of Hay’at Tahrir al-Sham (HTS) the organization declared terrorist by the UN that controls the province of Idlib in Syria thanks to Turkey’s military and financial support.

Just in recent days LNA has reported the embarrassing presence of six of these Al Qaeda-tied criminals in the field hospital of the Italian Army’s Bersaglieri in Misurata, near Tripoli.

The risk is therefore that of what has already happened in Ukraine where the former president Petro Poroshennko awarded Ukrainian citizenship, very valuable for easier travel in Europe, the Chechen militants of ISIS, who came to fight alongside the GNU National Guard and the neo-Nazi militias of the Azov Battalion in the Donbass civil war.

It is therefore not difficult to imagine that one day the Tripoli government could give Libyan citizenship or a one-way ticket to Italy and other European Union countries, to pro-Turkish Jihadists who risk finding themselves without a salary in the event of a cessation of hostilities.

According to the Syrian Observatory for Human Rights, the factions Division al-Mu’tasim, Sultan Murad, Suqur Al-Shamal Brigade, Al-Hamzat and Suleiman Shah, supported by Turkey, have so far lost 318 combatants in military operations, including 18 children under the age of eighteen.

As previously reported by Gospa News, however, at least 200 have arrived in Italy leaving Libya after having deserted the militias or for some secret mission of the very dangerous MIT intelligence of Ankara as already happened in the past with the organization of the travel of ISIS terrorists. Another 4,000 remain, 260 miles from Sicily …