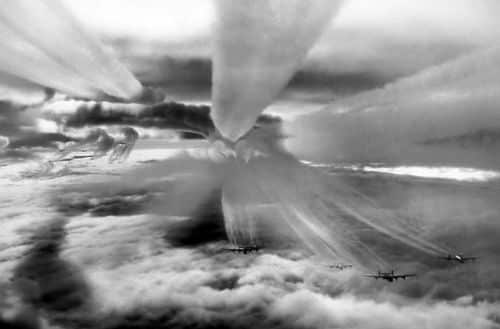 Of the varied conspiracy theories regarding contrails—you know, chemtrails—one stands out for being especially wrong: the belief that the plane-made clouds are chemicals the government is secretly spraying to battle climate change, to the peril of those on the ground. First, contrails are nothing but the incidental result of mixing hot, water-vapor-filled jet engine exhaust with cold air. Second, the government has nothing to do with them. Most important, they’re not battling climate change. They’re accelerating it.

Recent studies have found that contrails (a portmanteau of condensation and trails) may contribute as much as or more than all flights to the warming of the planet.

You may think of contrails as tiny lines against a vast sky, but in certain conditions, they can be a lot more. They can stretch tens of miles. Wind can spread them out. They can linger for hours. So as plane after plane runs the same route through the air, new and old contrails mingle and accumulate, forming airborne mosh pits of ice cloud. Scientists call these “contrail cirrus”—high-altitude clouds that can spread over hundreds of square miles. And they’re likely to become more of a problem: One study found that as air traffic increases, the heat-trapping effect of contrail cirrus in 2050 could be three times greater than it was in 2006. Clouds trap heat coming off the earth that would otherwise head for space, making them the biggest variable in the planet’s temperature and climate, according to NASA.

New research out of the UK has found two silver linings in the cloudy conundrum. The first is that just 2.2 percent of flights create 80 percent of contrail-related warming. According to a January paper in the journal Environmental Science & Technology, the troublemakers are mostly flights that take off in the late afternoon and early evening, whose contrails live mostly during the night—when they still trap some heat but can’t deflect any sunshine (which can balance out their impact). “The effects at night are purely warming,” says Marc Stettler, the lead author on the paper, Mitigating the Climate Forcing of Aircraft Contrails by Small-Scale Diversions and Technology Adoption.

The better news, Stettler and his coauthors report, is that those planes can avoid making most contrails with minor altitude changes. Contrails form only when the air is heavily saturated with water molecules that can attach to soot particles from engine exhaust and condense, grow into ice crystals, and join into clouds. Often, though, that saturation is confined to a narrow band of altitude, and airplanes can find drier areas by moving up or down.

Per the researchers’ math, diverting fewer than 2 percent of flights either up or down by 2,000 feet, or less, could reduce the total climate impact of contrails by 59 percent. And unlike the CO2 already living the high life, contrails do damage only during their brief lifetime. “It’s a really, really quick way that the aviation industry could address its impact on the climate,” says Stettler, an engineering professor at Imperial College London’s Centre for Transport Studies.

Stettler and his fellow authors based their findings on flights over Japan in 2012, which offered the best data they could access on the exact positions of actual flights. They matched that to weather data and used a computer model that predicts when aircraft create contrails to see which flights would have done the most damage.

The next step is to verify that these results hold up in other parts of the world, and learn whether it’s reasonable for airlines to change their flight paths. One snag might be figuring out when a plane is leaving a cloud in its wake. “There’s no mirror,” says Les Westbrooks, a professor of aeronautical science and airline operations at Embry-Riddle Aeronautical University. Stettler suggests some sort of sensor on the plane, or having pilots alert each other when they see the white stuff.

Westbrooks also doubts airlines will be willing to adjust flight paths designed to minimize fuel consumption—which accounts for about one-third of an airline’s expenses. They’re unlikely to want to jog up and down through the atmosphere, looking for a sweet spot. Katherine Estep, communications director for the industry trade group Airlines for America, says airlines are working with NASA and the FAA “to address potential contrail effects through more efficient aircraft, air traffic management strategies, and the substitution of traditional jet fuel with sustainable aviation fuel.” Stettler’s work estimates that the suggested altitude adjustments would increase fuel consumption—and carbon emissions—on those flights by just 0.27 percent.

Stettler calls the study a proof of concept, a reason to look more deeply into how to mitigate the effects of contrails. Airlines are more conscious than ever about their image with regard to climate change—see the recent proclamations about going carbon-neutral from JetBlue and Delta—and this could make for an easy way to impress the public and help the planet. They could even borrow a catchphrase from the folks on the ground: leave no trace.