[ Editor’s Note: The Trump regime, ignoring the possibility of letting the public have some respite over a Memorial Day weekend, one like the country has never experienced in terms of all the events that had to be cancelled, decided to keep the anti-Venezuela-Iran propaganda boiling at full steam.

The idea of threatening military interdiction of fuel ships from Iran carrying a critical commodity without which the Venezuelan people would suffer worse than they already are, is something I would classify as “un-American”. 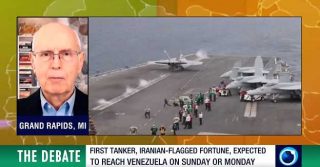 Our government issues orders and our military accepts orders to inflict deprivation on civilians of countries where the US is trying to implement regime change by any means necessary.

This is an activity that is illegal under the UN Charter, but which even the UN does not like to bring up, as it risks funding cuts similar to what the US has threatened for the WHO, part of Trump’s re-election campaign propaganda to dodge his own pitiful bungling as he attempts to keep the stock market up.

I guess I shouldn’t be surprised, as the US has blocked medical supplies going to Venezuela by confiscating all the bank holdings it had in the US, putting them under control of its Juan Guaido puppet simply by recognizing him as president.

My Debate opponent here was the most reactionary one I can remember having in several years, in the ranks of the ISIS supporting jihadi in England I debated once who later did some prison time for, wait for it, wait for it, aiding and abetting in terrorism.

In an odd twist, this is something that certain parts of the US government do when they choose, under the convenient cover of diplomatic immunity.

The good news in the article below is so far the first two ship loads of fuel have arrived in Venezuelan waters with any major silly events happening. Maybe some grownups at the Pentagon wisely chose not to besmirch the military by “sea-jacking” these ships.

While we pay our respects to our fallen military, something that unites us all, I suggest we start talking about what we need to do to protect those who take the oath being forced to engage in aiding and abetting terrorism in what Mr. Pompeo would call “persuing our interests”. Old American Western bank robbers were never afforded such a convenient cop-out, pardon the pun.

Our President is off playing golf at one of his courses this weekend, pumping more government revenue into his private business for the cost of all the logistics and security involved.

He has done this over 220 times, including during the early weeks of the coronavirus during the period when he was claiming it was a hoax and would just end one day. November 3rd will be a solemn judgment day for either Mr. Trump or the American people, if they elect him again. Thus ends my cherry missive for today… Jim W. Dean ] 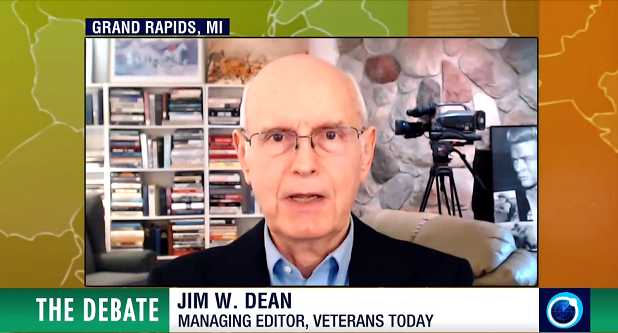 The Venezuelan media announce that a second Iranian tanker loaded with gasoline has sailed into the South American country’s territorial waters.

Venezuela’s Telesur television network said on Monday that the Iranian vessel, Forest, had entered the territorial waters of the Latin American country, and just like Fortune — the first Iranian tanker — was escorted by the Venezuelan Navy to its destination.

“Iranian ship Forest approaches Venezuelan coasts. Military forces of that country affirm that in the next few hours she will cross the north of the island of Margarita to continue heading to the El Palito refinery,” Telesur said in a post on its Twitter account.

The shipments have stirred the wrath of the US administration in Washington as both Iran and Venezuela are under illegal sanctions imposed by the White House.

The administration of President Donald Trump, which has returned US sanctions against Iran after leaving a historic nuclear accord between the Islamic Republic and world powers, said earlier this month that it was considering “measures” to take in response to the shipments.

Iran’s President Hassan Rouhani warned on Saturday of retaliatory measures against the United States if it caused problems for tankers.

Venezuelan President Nicolas Maduro has also dismissed threats of harassment for the shipments, insisting that Tehran and Caracas “both want peace, and we have the right to trade freely.”