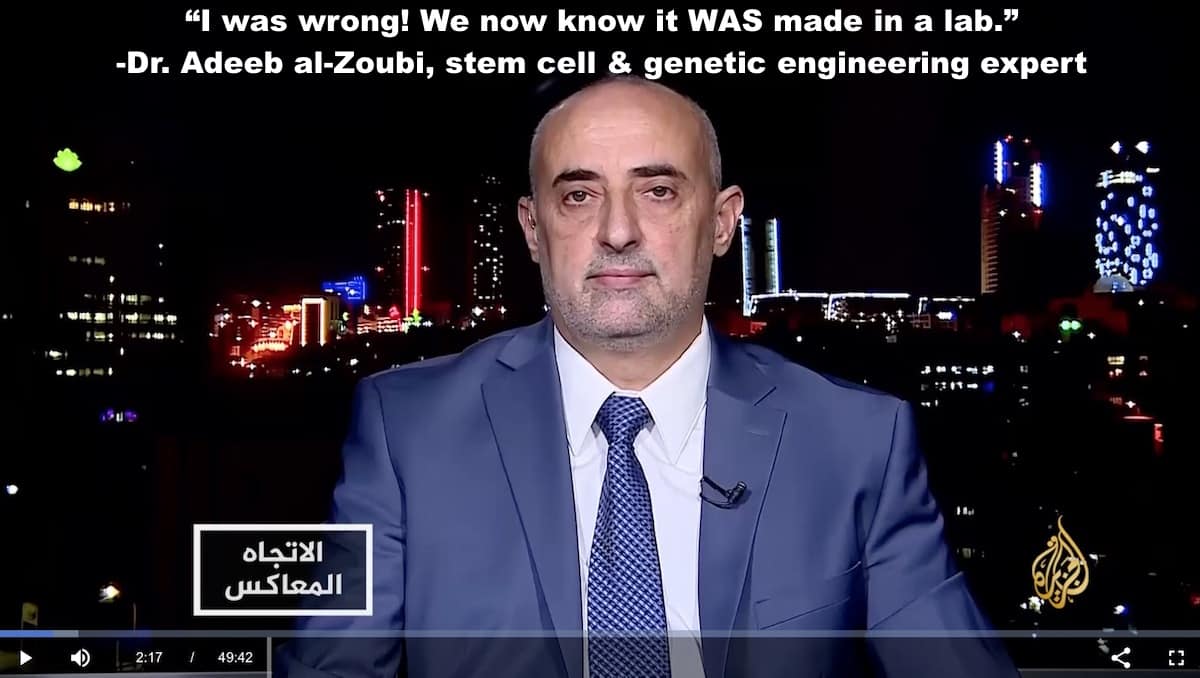 The dominant globalist (anti-Trump) wing of the mainstream media (MSM) continues to engage in a massive coverup and propaganda operation aimed at concealing the evidence that COVID-19 was made in a germ warfare lab. If you get your news from NYT/WaPo/CNN/MSNBC/Telegraph/Guardian you would never even know about the lively scientific debate—which has recently been won by those arguing for the artificial origin of COVID.

Meanwhile the pseudo-nationalist pro-Trump wing is peddling another lie: That COVID was manufactured and unleashed, whether accidentally or deliberately, by the Chinese government. The “blame China” mighty Wurlitzer is playing ever-louder as the accumulating scientific evidence proves COVID is a fabricated pandemic.

Both wings of the MSM are owned and operated by the same Western-based international banking cabal, the prime suspect in the coronavirus case. The cabal’s motives—4G/5G war on China (and Iran), depopulation and removal of “useless eaters,” debt liquidation, wealth-transfer to the super-rich—are all too obvious.

Bankster-owned Western media have blacked out the lively scientific and political debate about the coronavirus bioweapon. But outside the 100%-bankster-owned-and-operated mentally-locked-down West, people are allowed more freedom to think and inquire.

Less than two months ago Jordanian stem cell researcher Dr. Adeeb Al-Zoubi appeared on the Arab world’s most popular current events TV show and argued against the hypothesis that COVID-19 was made in a lab. Tuesday he returned to The Opposite Direction to explain why accumulating evidence, including recent studies in Hong Kong and Australia, has convinced him that he was wrong and that in fact COVID-19 must be the product of human manipulation. He says other experts are likewise coming around to the “artificial origin” view. According to the show’s write-up:

“Scientific and medical experts around the world are debating the origin of the coronavirus: Was it natural or fabricated? Adeeb Al-Zoubi, director of the Arab Center for Stem Cells in Jordan, has reversed his earlier view that the virus is natural and spread without human intervention—a mistake based on the information available to him at the time. He now says in the 5/26/2020 episode of the ‘Opposite Direction‘ program that, thanks to progress of research on the coronavirus, he understands that the virus did not emerge naturally, but rather due to human modification.”

Are we still allowed to have this kind of debate in the USA? Find out next Sunday, May 31, at the interactive webinar: