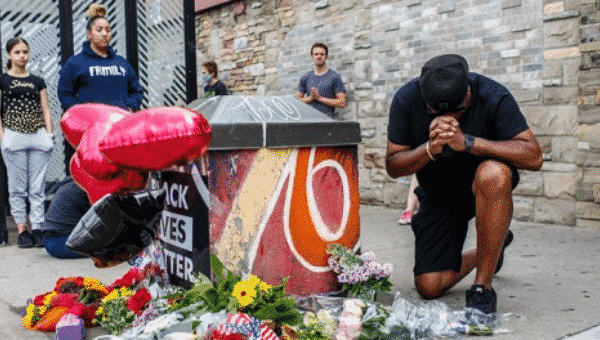 U.S. President Donald Trump has not said a single word about the killing on Monday of Black citizen George Floyd, who died after pleading that he couldn’t breathe while a white police officer held him down with a knee on his neck.

Though almost two days have passed since video footage emerged Tuesday showing Floyd imploring for his life as a policeman knelt on his neck, Trump has yet to make any comment.

Yet, while ignoring the killing, the president found time Wednesday to tweet about his “Obamagate” conspiracy theory and Twitter’s decision to fact-check his false attack on vote-by-mail.

For his part, presumptive 2020 Democratic presidential nominee Joe Biden has joined with those demanding a “thorough” federal investigation into the incident that has sparked large protests and nationwide calls for justice.

“George Floyd deserved better and his family deserves justice. His life mattered,” Biden tweeted late Tuesday as demonstrators were tear-gassed by police in the streets of Minneapolis. “I’m grateful for the swift action in Minneapolis to fire the officers involved—they must be held responsible for their egregious actions. The FBI should conduct a thorough investigation.”

Twitter has now shown that everything we have been saying about them (and their other compatriots) is correct. Big action to follow!

Biden’s demand for a federal investigation into Floyd’s killing followed similar calls from civil rights groups and members of Congress.

Executive director of the ACLU of Minnesota, John Gordon, said in a statement Tuesday that the “horrific video” of Floyd’s killing “underscores the immediate need for a thorough, fair, and transparent investigation” into his death.

“The community needs a comprehensive review and the reform of police practices and policies,” Gordon said. “The officers involved—not just the perpetrator, but also those who stood by and did nothing—must be held accountable.”

A Black man died after a Minneapolis police officer pinned him down with his knee, making him the latest victim of #racist police violence in the U.S.#PoliceBrutality #USA pic.twitter.com/JxpG0DFJ0g