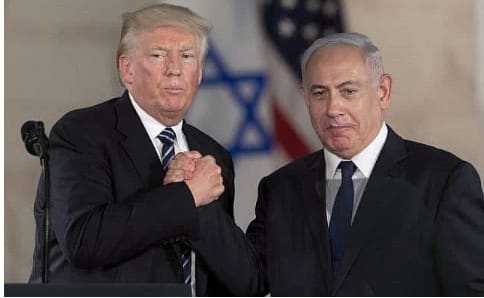 Special Introduction. Mahmoud Abbas, the head of the PLO, Fatah, and PA, announced the suspension of all contacts with Israel, an empty statement since it was not accompanied by the formal diplomatic protocol as required by international laws. The PLO leadership failed miserably in the armed revolution and failed in the never-ending “ peace process”. If I know how the PLO operate for sure, they did not think of all the consequences that have to do with transport, electricity, the water supply of materials and consumer good. Formally revoking all agreements with Israel also means the disbanding of the Palestinian Authority, the effective management of the Israeli Occupation.

Here is the problem. Not so sure how these international forces will work and whether the US on orders from Israel will veto such a proposal and whether the UN Security Council at the mercy of the US veto will ever be able to carry on such demand, let alone a resolution.

How can anyone make sense demanding international protections when the PLO and Fatah security forces failed to provide such protection. Of course, we all need to understand that the Palestinian Security Forces, as agreed to in Oslo was to provide protection for and assist the Israeli Occupation with its mission in the Occupied Territories, providing auxiliary security for the IDF and armed Israeli settlers.

One can understand the need for such a force in Gaza, which may require the disarming of both Hamas and Islamic Jihad, provided these international security forces can prevent Israeli attacks and can defend the people of Gaza from Israeli jets, tanks, and drones and end the siege of Gaza.

And whether such security forces will have the necessary military gears to withstand an Israeli assault. This means the opening of the port and airport and all international access for the people of Gaza. It is best to make access through the ports and airports without having to worry about Egypt closing its borders.

However, all this will make sense only if the UN Security Council with no veto from the US push through for an “international trusteeship’ to take charge of both the security of the Occupied Territories (Gaza and West Bank) and also the administrations of the civil affairs of the Palestinians under Occupation.

This, of course, means the end of the PLO and Fatah as managers of the Israeli Occupation and the loss of very lucrative contracts that made all leaders of these organizations multi-millionaires, and it also means that Hamas must give up both the security and administrations of Gaza.

Already Israeli agents within the US governments and in other countries like France and UK with seats in the UNSC will become very active, making sure that such things never happen. Giving excuses that Israel by killing, murdering hundreds and wounding thousands of unarmed civil demonstrators is defending itself with the similar editorial in both the New York Times and the Washington Post standing up for Israel’s right to kill and murder innocent and unarmed civilians who were, by the way, demonstrating within their own besieged Gaza and never close enough to cause worry for the massive Israeli snipers deployed.

Until such time the PLO and Fatah decide it is time to end this tragedy, conspiracy, and perpetual fraud on the Palestinians and the world for the last 60 years, give up its financial interests in the continued occupation, no hope for such things to take place. For sure, the PLO will stand in the way as the sole and legitimate representative of the Israeli Occupation.

The international trusteeship will guarantee Israeli will evacuate the Occupied Territories, toss to the garbage can Oslo Accord, disarm all Israeli settlers and trespassers, disarm all Palestinians factions including PLO Security Forces. For an interim period of 5-7 years during which the hope for the new Palestinian leadership to emerge to replace this corrupt, incompetent and illegitimate leadership that hijacked the Palestinian cause for the last 60 years.

The new leadership should work with those Israelis who are willing to give up their Zionist apartheid racists state for the OneState www.1not2.org for All of its people. It will happen as this is the only solution forward.