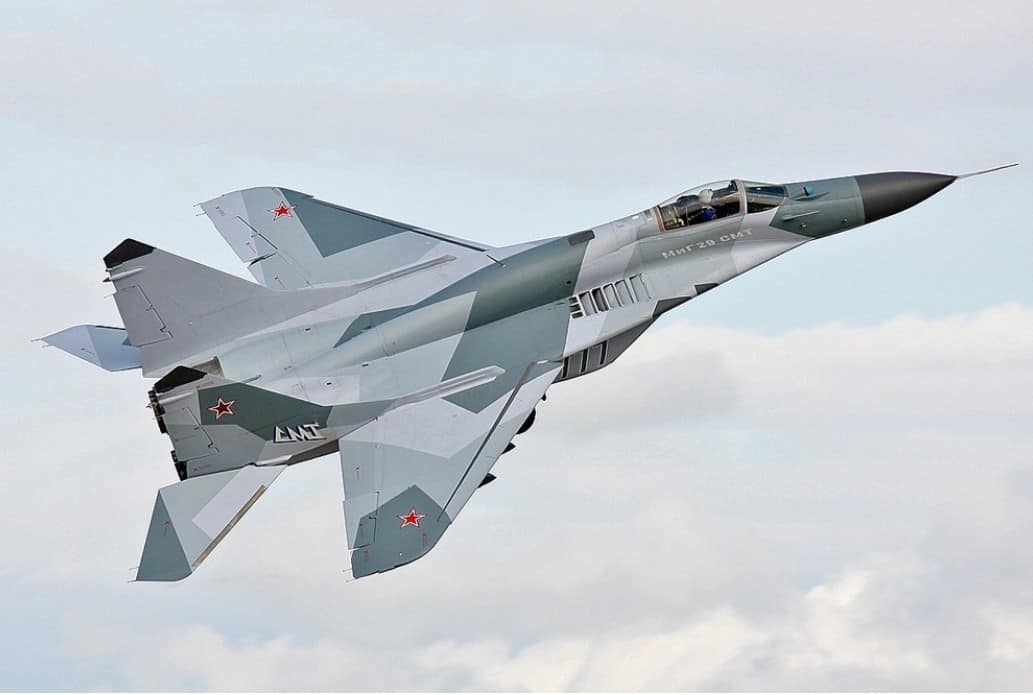 VT: A website called The Drive, claiming to be a car and motorcycle blog with curious stains of Pentagon propaganda dripping everywhere, though nothing as obnoxious as Task and Purpose, carried the following, identified as CIA sponsored propaganda:

Pictures have emerged on social media of unmarked MiG-29 Fulcrums parked at Russia’s Khmeimim Air Base in Syria last week. The War Zone was first to confirm that these jets had arrived at that Syrian base before they they headed on to Libya, surreptitious movements that U.S. Africa Command has since released additional information about this week. Those aircraft, as well as other combat jets, are now in a position to support forces aligned with rogue Libyan general Khalifa Haftar, who has been fighting for years against the country’s U.N.-recognized government.

The pictures offer a clear look at one unmarked Fulcrum and the tail of a second one is also visible in the background. The areas of their tails where national insignia, such as the red star of the Russian Air Force, are typically painted on MiG-29s are clearly painted over. The jets also lack any other discernable markings.

The jet that is the main focus of the pictures appears to be a variant in the MiG-29S series, which are generally identifiable based on the extended strakes leading forward from each of the twin tails. It’s not otherwise clear whether this might be an upgraded variant within that series, such as the MiG-29SM. MiG has also crafted a number of customer-specific configurations based on the MiG-29S pattern.

Earlier the same site claimed they were going to India.  When India was to get them, the Fulcrum “hulks” were to be a highly advanced configuration but when they ended up in Syria, with Russia’s most updated radar and avionics.

One might note the internet is filled with Pentagon financed blogs like the ones that drastically lowered the Google/online specification of the SU 25 when Ukraine was accused of shooting down MH 17 with, wait for it, 2 SU 25’s that suddenly had the performance characteristics of a Sopwith Camel.

For the Mig 29 Fulcrum, despite avionics and engines upgraded, much improved range, speed and service ceiling, 30 websites carried the same 1977 specifications as though that would save an Israeli F15 with a Fulcum dancing behind it.

As for where the planes the propagandists said went to Libya, the following:

BEIRUT, LEBANON – Syria has received from the Russian Ministry of Defense the next batch of advanced and modernized MiG-29 warplanes.

“In the context of military and technical cooperation between the Syrian Arab Republic and the Russian Federation, and within a special ceremony held at the Hmeimim Airbase, the Russian side delivered the next batch of advanced and modernized MiG-29 warplanes to the Syrian Arab Army. ”

The source added that “the planes, which are more effective than their previous generation, carried out their flights from Hmeimim base to their areas of concentration in the Syrian military airports.”

They also clarified that, “From the beginning of next June, the Syrian pilots will begin carrying out the scheduled shifts of these planes in the Syrian airspace.”

Yesterday , Russian President Vladimir Putin signed a decree in which he authorized the Ministries of Defense and Foreign Affairs to conduct negotiations with the Syrian government in order to hand over the Russian military additional facilities and expand their maritime access in Syria.