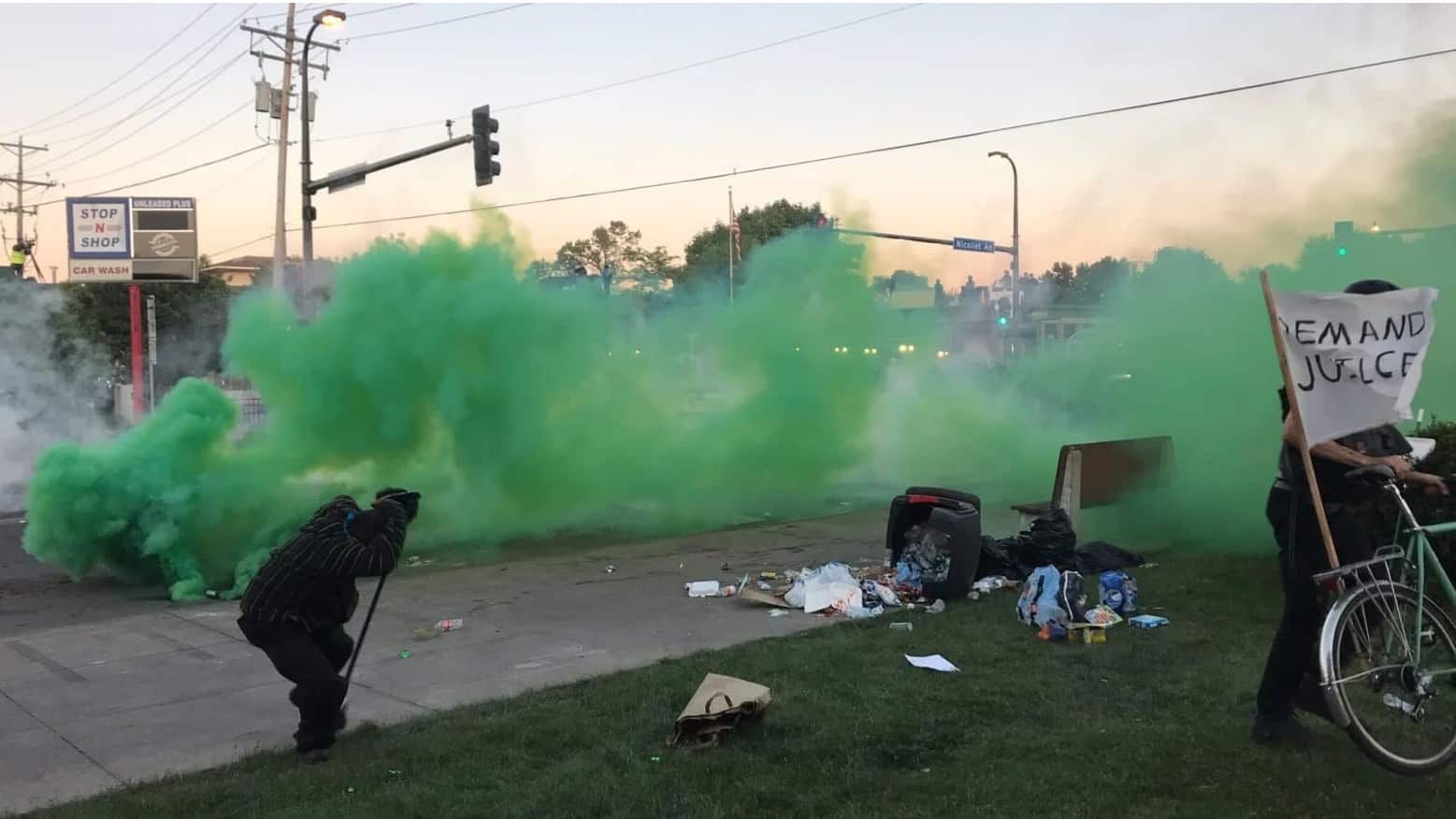 VT has found that among the most violent protesters, almost all are white.  Some have been identified as US Army, some as political operatives of the GOP and others as, now wait for it….police.

MINNEAPOLIS—A night after Minneapolis burned, protests on Saturday were mostly calm—until cops and the National Guard moved in with force against those breaking curfew.

We start with a bright moment from Seattle.  Here, a security guard (with a glock) takes an M4 Carbine from a protester who found it where a Seattle cop had dropped it while running away.  Thanks to the guard in the video, cops and protesters don’t need real weapons like this, our hero of the day:

A scary moment from earlier on @komonews, a man pulled out a large weapon (AR-15?) and another person pulled it out of his hands. Smartly, KOMO pulled away from coverage as no one knew what was going to happen next but no shots were fired. pic.twitter.com/ToQ7jipM4N

And now for bad stuff:

Just got accused of being an “outsider” here to do harm. Nice. https://t.co/teTipZ9oI2

She says she was walking home with her groceries when police fired some sort of pellet in her face. Says she’s not a protester. #DallasProtests pic.twitter.com/2IyO1S9j6n

Here's a supercut of unnecessary, unconstitutional and violent police misconduct from … the past several days. Wholesale reform of law enforcement culture is in order, not that it will happen under this president. https://t.co/nKzvdXkI2Y

Then whatever this green stuff is, which was all over the place last night. pic.twitter.com/aB93XDmser

It's hard to tell but I think if I remember right this video began either just as, or just after, I saw police shoot directly at photographers and a video crew. Lawless. pic.twitter.com/p38KFbOHJ3

The protests in Minneapolis, where 46-year-old George Floyd died after a white cop knelt on his neck for several minutes, began peacefully on Saturday as hundreds of residents marched alongside police officers. But just after the 8:00 p.m. curfew passed and all major highways into the Twin Cities were shut down, police appeared in full gear.

Violation of the right to peaceful assembly. https://t.co/jPDIDxnrk3

Looks like some professional law enforcement behavior to me. https://t.co/5nOtP2WyBZ

They began to fling tear gas, flashbangs, and rubber bullets at protesters and journalists alike—pushing crowds away from police precincts that had been previously set ablaze the previous nights. While police were ostensibly cracking down on curfew breakers, it’s not clear why they would target journalists, who are exempt from the 8 p.m. curfew and allowed to report from the scene.

“Tonight will be different,” Minnesota Gov. Tim Walz said Saturday evening just after the curfew went into effect. “If you are on the street tonight, it is very clear: You are not with us. You do not share our values. And we will use the full strength of goodness and righteousness to make sure that this ends.”  Read more…