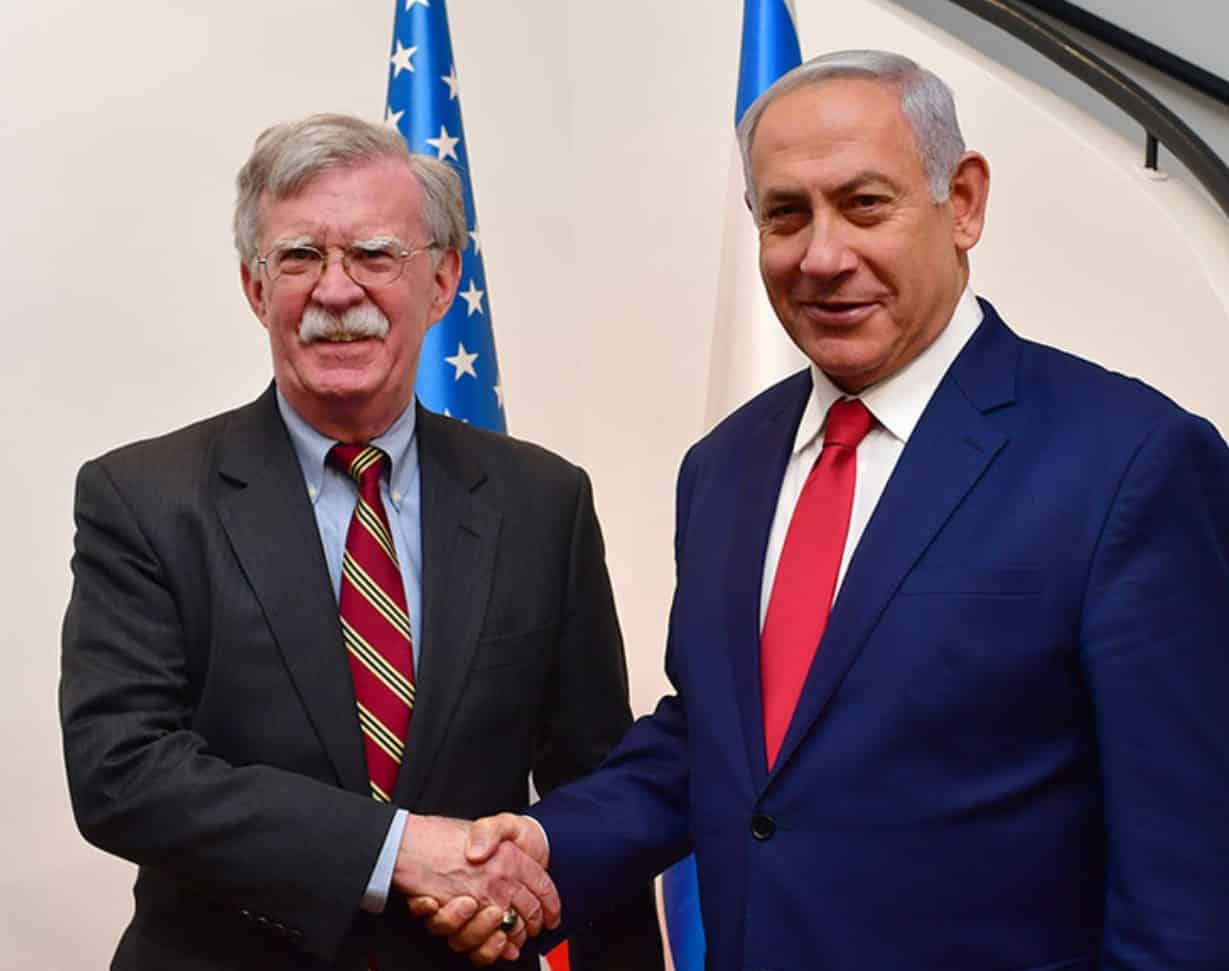 John Bolton’s revenge book hasn’t revealed much that is new. But there is one exception: the story of Bolton, Secretary of State Mike Pompeo, and Israeli Prime Minister Benjamin Netanyahu’s efforts to sabotage Trump’s would-be diplomacy with Tehran.

This episode reveals something crucial and until now not fully appreciated: Netanyahu’s ferocious opposition to the Iran nuclear deal had little to do with the deal itself and everything to do with the very idea of the United States striking any deal with Iran. Because Netanyahu wasn’t targeting his nemesis Obama this time – he was undermining his friend Trump.

For the United States, this implies that any effort to square the circle of diplomatically resolving the dispute with Iran while satisfying Saudi Arabia’s and Israel’s geostrategic needs simply may not be possible.

Washington must choose between either satisfying its own interest in bringing U.S. troops home from the Middle East or satisfying Netanyahu and the Saudi royal family’s interest in keeping the United States trapped in a cycle of enmity with Iran that keeps the region’s balance in their favor.

If a Trump II or a Biden administration tries to achieve both, it will end up achieving neither.

I write about this for ForeignPolicy.com today.

Netanyahu loves Trump. So why did he conspire with Bolton to prevent Trump from talking to Iran?

This episode reveals something crucial and until now not fully appreciated: Netanyahu’s ferocious opposition to the Iran nuclear deal had little to do with the deal itself and everything to do with the very idea of the United States striking any deal with Iran.

The same is true for Saudi Arabia. Whomever occupies the White House next year must address head-on the Israeli prime minister and the Saudi crown prince’s commitment to keeping the United States bogged down in conflict with Iran.

Bolton boasts about his extensive coordination with Pompeo and Netanyahu to scuttle mediation efforts by French President Emmanuel Macron and to, at all costs, prevent a meeting between Trump and Iranian Foreign Minister Mohammad Javad Zarif during the G-7 summit in Biarritz, France, in 2019.

Desperate to block any opening between the United States and Iran, Bolton instructed his staff to prepare a flight for him to return to Washington in protest. The idea of the Americans and Iranians talking to each other so offended Bolton that he prepared a two-sentence letter of resignation if the meeting were to go ahead. He had no such letter in hand before Trump’s summit with North Korean leader Kim Jong Un.

In fact, Bolton himself participated in that meeting and shook Kim’s hand—demonstrating that as hawkish as he is on North Korea, he views Iran as a separate sort of pariah altogether. He had already succeeded in scuttling an effort by Republican Sen. Rand Paul to get Zarif to visit the White House. Pompeo assured Bolton that he would follow his lead in resigning if Trump met with Zarif, though, publicly, Pompeo continues to insist that his goal is to get the Iranians to “come to the table.”

Bolton appears to have had no qualms about working with a foreign leader to undermine the expressed desire of the U.S. president he was supposedly serving. When Netanyahu tried to dissuade Trump from meeting with Zarif, Trump’s son-in-law and advisor Jared Kushner blocked the Israeli prime minister’s attempts to reach Trump, as he believed it was inappropriate for a foreign leader to try to dictate to the U.S. president whom he should and shouldn’t speak to. Bolton had no such trepidation and instead accused Kushner of being a “Democrat.”

But behind the banal palace intrigue that Bolton details lurks a geopolitical reality that the United States must come to terms with. The Netanyahu government and the Israeli security apparatus—albeit not all parts of it—were not opposed to former President Barack Obama’s nuclear deal because of its alleged flaws. They were then and now remain opposed to any deal with Iran due to its geopolitical implications.

After all, in Trump, Netanyahu found a very different U.S. president. In Trump, he had a president willing to break with all his predecessors in acquiescing to almost all key Israeli demands: moving the U.S. Embassy to Jerusalem, recognizing Israeli control of the Golan Heights, accepting Israeli annexation of Palestinian land, and even promising Netanyahu that the United States will support Israel if it chooses to start a war with Iran.

Both Presidents George W. Bush and Obama had pressed Israel not to take military action and only offered U.S. backing if the Iranians initiated the fighting. It is then no surprise that the Israeli prime minister has hailed the former reality TV star as the “the greatest friend that Israel has ever had in the White House.”

It is hard to imagine a bigger pushover in the White House from Netanyahu’s standpoint. Yet, he repeatedly worked with Bolton and Pompeo to prevent even a single meeting between Trump and the Iranians, fearing that it would lead to an agreement between Tehran and Washington that would dial back their animosity.

Netanyahu’s calculation is not terribly difficult to understand. Israel’s longest-serving prime minister and many within the Israeli security establishment have feared that U.S.-Iranian diplomacy ultimately would lead to an agreement that would reduce U.S.-Iranian tensions without necessarily decreasing the Israeli-Iranian animus proportionally.

With Iran largely moving off of the United States’ radar, the U.S. government would be freed to shift its focus and resources away from the Middle East, leaving Israel “abandoned” to deal with Iran without the automatic backing of the United States. This would reduce Israeli maneuverability in the Middle East and affect the configuration of the regional balance of power in a way that negatively impacts Israeli interests.

Supremely confident that he could bend Washington’s will to his own, Netanyahu opted to prevent U.S.-Iranian diplomacy and sabotage any potential negotiations—even at the expense of damaging his relations with Obama or Israel’s relations with the Democratic Party.

A U.S.-Iranian accommodation would not only jeopardize Saudi Arabia’s beneficial position, but it would also force Riyadh to confront Tehran alone—something it lacks the military and political competence to do, unlike Israel.

In that sense, Saudi Arabia’s anxiety about losing U.S. backing is more understandable. Israel is a powerful nuclear-equipped nation with one of the most sophisticated militaries in the world. It has deterred and pushed back Iran’s position in Syria without any help from the United States. Saudi Arabia can’t point to any such achievement.

For the United States—whether led by Trump or by his rival candidate Joe Biden—this implies that any effort to square the circle of diplomatically resolving the dispute with Iran while satisfying Saudi Arabia’s and Israel’s geostrategic needs simply may not be possible.

Bolton’s inside account has inadvertently clarified that Washington must choose between either satisfying its own interest in bringing U.S. troops home from the Middle East and avoiding an unnecessary war with Iran or satisfying Netanyahu and the Saudi royal family’s interest in keeping the United States trapped in a cycle of enmity with Iran that keeps the region’s balance in their favor.

The reality is that none of the United States’ core interests warrants a major U.S. military presence in the Middle East, let alone U.S. military domination of the region. Retaining such a force structure in order to sustain a partnership with Israel and Saudi Arabia gets the very purpose of alliances backward.

However problematic or erroneous their approach may be, Israel and Saudi Arabia have defined their interests vis-à-vis America and are pursuing them unapologetically. The U.S. government should do the same.

Trita Parsi is the executive vice president of the Quincy Institute for Responsible Statecraft and an adjunct associate professor at Georgetown University. Twitter: @tparsi