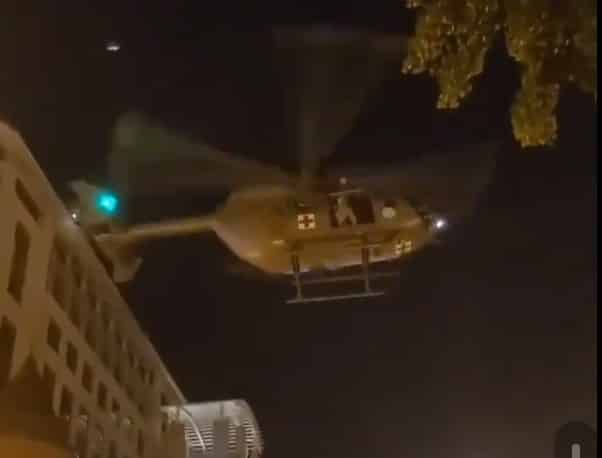 Daily Beast: Earlier this week, shocking footage showed a medical helicopter hovering dangerously close to protesters in Washington, D.C. in a maneuver that aviators described as a “show of force.”

At his press briefing, defense secretary Mark Esper also said he had asked the army secretary, Ryan McCarthy, to launch an inquiry into a National Guard medevac helicopter that was filmed hovering low over protesters in Washington, in an apparent effort to disperse them by intimidation and the strong wind from its rotor.

Esper said it was only confirmed it was a National Guard helicopter on Tuesday and that he ordered the inquiry within an hour of learning about it.

“I want to make sure I understand why,” Esper said. “What happened? Who was involved? What orders were they given or not given? Was there a safety issue involved with an aircraft. hovering that low? So there’s a lot of questions that need to be answered.”

Esper refused to be drawn in to making an initial assessment but he did offer an alternative to the general view that the helicopter was using for intimidation.

“I got a report back that they were asked by law enforcement to look at a checkpoint, a National Guard checkpoint, to see if there were protesters around, so there’s conflicting reports,” Esper said.

Use of medical helicopter to target protesters is under investigation, National Guard says https://t.co/34cUG1lXDu

The investigation will focus on the medical evacuation helicopter which was filmed hovering above protesters—a Black Hawk helicopter was also spotted performing a similar maneuver. Military justice experts condemned the use of the medical helicopter. “This was a foolish move,” Geoffrey Corn, a former Army lawyer told The Washington Post. “The symbolic significance of the Red Cross is pervasive: It denotes a ‘noncombatant’ function of the armed forces.”

Helicopter parked over a crowd at 5/E St Nw #WashingtonDCProtest trying to force ppl away with noise and wind pic.twitter.com/x0AcC3ob0S

(The police do not exist to serve and protect you. They exist to maintain our caste system.)