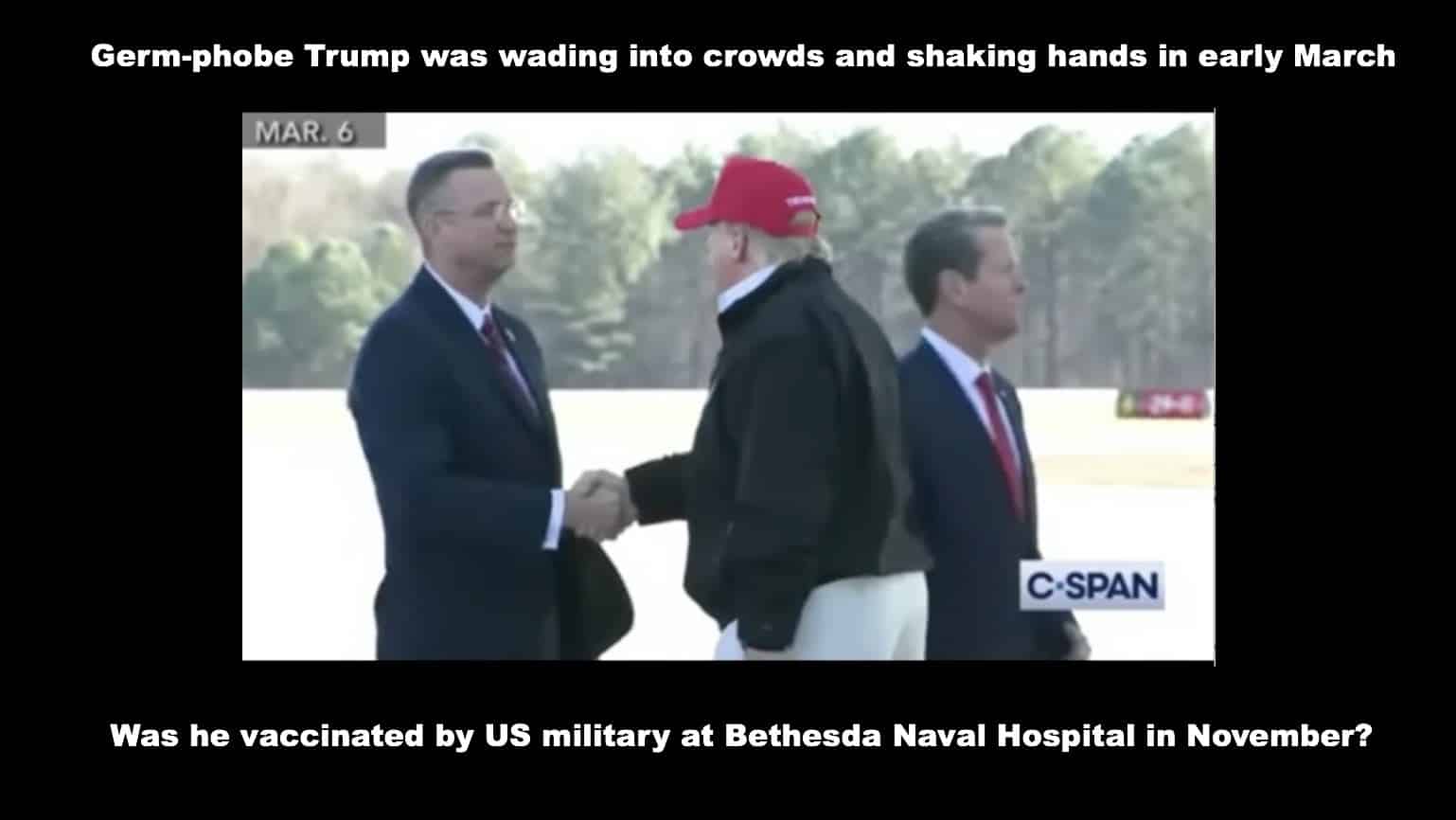 Listen to the full interview HERE

Researcher and filmmaker John Hankey comments on topics addressed in the recent webinar: Covid-19–A New 9/11 Style False Flag? Was Covid-19 made in a lab? Is it a bioweapon? Who made it? Deliberate or accidental release? If deliberate, who gains?

Extracts from John Hankey’s statements in this interview with VT Editor Kevin Barrett:

There was a story that broke last Friday that the U.S. has given a billion dollars to a lab in Oxford. This story was carried very, very quietly on the Today Show. They had a tiny segment, but I happened to stumble upon it. They interviewed the guy who runs the Oxford Lab that got this billion dollars, saying that they are going into production today—this is last week— to make hundreds of millions of doses of this vaccine.

And then the head of the Pentagon—the guy’s name is Esper—the same morning gives a speech in which he absolutely guarantees that this vaccine will be available (this year.) Which is the same thing the guy in Oxford was saying. And, one: What the hell is the Pentagon doing having anything to say about it? It reminds me of John Kennedy Junior’s plane going down. And the Pentagon takes over the news reporting at noon the next day. What the hell? Just a screaming red flag. So here comes this guy waltzing in. And the reporter who’s interviewing him is very, very appropriately stunned and says you don’t want to qualify that at all? Are you sure that’s what you mean? How can you be saying this? And he goes on about how their scientists are the best in the world and they have developed this vaccine. The guy in Oxford or maybe it was The New York Times actually says “the reason they gave us this money is because said the reason they gave them this money is because they had done these monkey studies at Rocky Mountain Labs,” which do defense research in the United States. But clearly, though they don’t say so, they are Pentagon affiliated.

Sometimes you can’t develop a vaccine. These guys did it in two weeks. And they did it using recombinant gene technology, which takes years, because it’s so complicated to do it right, it’s so random. You take the genes and you cut them into pieces and then you see what each of those pieces does. And if you find the piece that does the trick that you’re looking for, blah, blah, blah. The notion that you would do it in a couple of years is crazy. The notion that you would do it in two weeks is the Pentagon saying “we produced this vaccine years ago. We’ve had it. It’s part of a bio weapons program.” Right? If you have some toxic virus, it’s not a weapon until you have the vaccine.

So Trump has an October surprise coming. He and his brilliant team of managers. They are going to produce it. You’re going to have hundreds of millions of doses of this vaccine available by July. And if not July, certainly August and September. And by October the effectiveness of this vaccine will probably have been very, very thoroughly demonstrated throughout the U.S. The people who get it don’t get the virus.

And that’s the other thing, it’s in that clip that I sent you, that Trump is running around. When he is at the White House, he is surrounded by people who have either been exposed to the coronavirus or tested positive for the coronavirus. Stephen Miller’s wife! Steven Miller is his closest aide. And then in the clip that I sent you, this is March 6th, he’s charging into a crowd, shaking hands. And, you know, they’re the U.S. By the end of February, the U.S. was being torn up. The situation in New York was already desperate at the end of February. And this guy is charging into crowds and shaking hands. And, yes, he’s a germophobe. And it’s only freaking obvious that Trump has every confidence that he’s not getting coronavirus. Everyone around him has it! There was a little blurb in the news about one of his economic advisers who said, “yeah, I’m terrified to go to work at the White House.” But Trump is not. How is that possible? And, you know, besides the fact that he is a physical coward and a germophobe. How can you possibly account for it?

There are any number of data points pointing to November as the date when the virus started to appear in the United States and Italy and France (also see here)...The mayor of Belleville, New Jersey, said that he was deathly ill in the middle of November and then tested positive for coronavirus…And that’s the time that Trump made an unscheduled visit to Bethesda for purposes unknown. The data points line up. He must have gotten the vaccine in November and then sent Pence to the CPAC conference to get exposed to the virus and come back and say, well, apparently it works.

What’s interesting is to sit and try to figure out who got the vaccine. Trump, obviously, and Pence, and not Stephen Millers wife. Steven Miller apparently got the vaccine because his wife got the virus and he didn’t….She just announced she’s pregnant. So that’s a marriage where social distancing is not taking place. I suspect that Melania could. You know, if she came down with it and Trump didn’t. That would not necessarily be the same kind of proof as a guy whose wife just got pregnant not coming down with it and his wife did. He he clearly has been vaccinated.