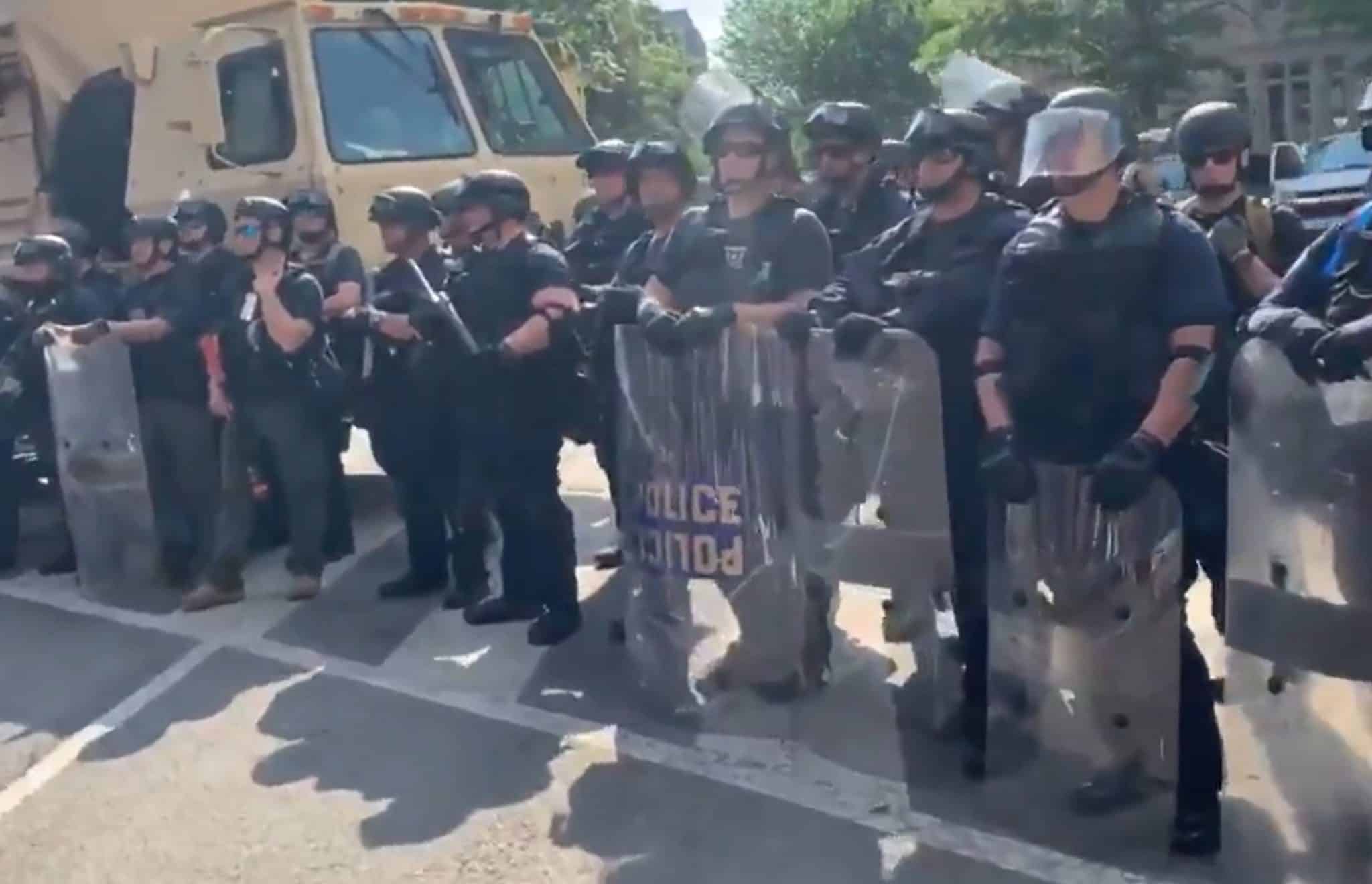 VT: The cover story is that they are prison guards, special “fat guy” SWAT teams for the Bureau of Prisons.  No such force exists.  They are on the streets of Washington, Philadelphia and are being moved around the country without permission of state and local governments.

Washington, DC is teeming with unidentified irregular paramilitary forces that are occupying the public spaces.

They could be rogue Tea Party militia, or Russian "Green Men", or United Nations Troops for all we know.

But they are *not* working for the American people. https://t.co/C3zMi1dzFH

As you will note, their number includes no Hispanic or African Americans, who make up over 40% of the employees of the Bureau of Prisons and every other agency.

It’s unlawful for them to do that. Call the police and report that an unidentified heavily armed group of men have assembled in that area.

These are the same people who were on the steps of the capitol building in Lansing Michigan but with a shave and bath, the same way ISIS magically turns back into the Turkish Army when things get hot.

What we do know is this, Trump, Barr, Kushner, Pompeo and Esper are members of a religious cult that believes the US Constitution is an impediment to their plan, a war with Russia over the Middle East, and the apocalypse.
Anyone who doubts this has been hiding under the covers since the Neo-cons were unveiled.

Back outside the White House. Today the perimeter has been pushed back another half block. Federal law enforcement of some kind, but they won’t identify themselves, and all insignias and name plates have been removed. pic.twitter.com/q5dmdMgkLV

RT: Washingtonians are becoming increasingly unnerved by the sudden presence of unmarked militias who have been deployed to the streets of the US capital as protests rage, but who won’t identify themselves to citizens and journalists.

This memo from Gen. Milley is pretty interesting–I'd even say startling. pic.twitter.com/25Q5eyuspb

Videos and photographs of the mysterious and heavily-armed figures have been swirling on social media for days, with many who have encountered them reporting that they refuse to say which government agency they are working for.

The anonymity of the forces has led some to suggest they look like armed “mercenaries” rather than government employees. One DC-dweller tweeted that the nation’s capital felt like it was “under some sort of military occupation.”

@SenFeinstein @SenKamalaHarris @RepZoeLofgren find out who these unnamed paramilitary forces are in Washington! What right do they have to be there, and who commands them? https://t.co/lFOMBWnIHl

One ominous-looking video posted on Thursday shows lines of burly men without any identifying ID tags or insignias standing guard near the White House. “Refused to tell us who they’re with,” the tweeter who posted the video said.

What if all this paramilitary and militia personnel pouring into Washington is just a dress rehearsal for November, when the current WH occupant declares that the landslide against him was rigged?https://t.co/0fYtxya5ON

Some of the men identified themselves only as being with “the Department of Justice,” according to one Mother Jones journalist.

It turns out that at least some of the men are prison riot officers sent in by the Federal Bureau of Prisons at the request of Attorney General William Barr, according to NBC. A statement from the bureau said the officers are un-badged because they are “serving a broader mission.”

Though that doesn’t seem like an entirely legitimate excuse for the lack of identifying information. Demonstrators protesting police brutality are concerned that if any of the badgeless officers seriously injure anyone or commit other crimes while patrolling the capital, that there will be no way to identify them.

It appears DC is not the only place where the unmarked police have shown up. Some people tweeted about similarly unidentified forces at Philadelphia protests, too.

“How is anyone supposed to know for sure he’s even a real cop?” one person wrote in response to a photo of an armed man clad head-to-toe in black at one Philly protest.