VT: Victim uninjured but chose to use the “Gaza knee choke” which has killed so many Palestinians.  Local police in Sarasota received training by Israeli instructors and are now lying after being caught on video. (see Appendix)

Always note that at least 4 police are present and before Israeli training, police went a century without having to play IDF thug with American citizens.

(CNN)A Florida police department has launched an internal investigation after a video surfaced on social media showing a Sarasota police officer kneeling on a black man’s neck during an arrest.

In the nearly 90-second cellphone video taken by a bystander during the May 18 incident, three officers can be seen attempting to take a male individual into custody. One of the two officers is then seen kneeling on the head and neck of the man.

The man, who was arrested on a domestic violence/battery charge, is heard yelling, “Why am I being arrested?” as the officer kneels on him.

“As I’m yelling, and asking, ‘Why am I being detained,’ he started putting his knee on my neck,” Patrick Carroll said in an interview with CNN affiliate WFTS.

The video surfaced as protests are underway across the nation seeking justice and reform in the wake of George Floyd’s death, which an independent autopsy attributed to officers kneeling on him during his arrest. Video showed an officer with a knee on Floyd’s neck for nearly nine minutes.
–
In the police incident report obtained by CNN, one of the officers involved says that after they placed Carroll in handcuffs, the “defendant attempted to pull away from officers and refused to get into the rear of the patrol vehicle. Minor force was used to escort subject to the ground and secure him long enough for him to calm down.”
–
The Sarasota Police Department said in a statement released Tuesday it didn’t learn about the video until Monday when the department was tagged in a social media post showing a portion of the arrest. After a review of several videos, Chief Bernadette DiPino immediately initiated a formal internal affairs investigation, the department said.
–
The officer, who had not been identified, has been placed on administrative leave.

U.S. Police are Being Trained by Israel—And Communities of Color Are Paying the Price

In recent years, Georgia has experienced troubling trends in fatal police shootings. As this has unfolded, the state continues to pursue a “police exchange” program with the state of Israel. 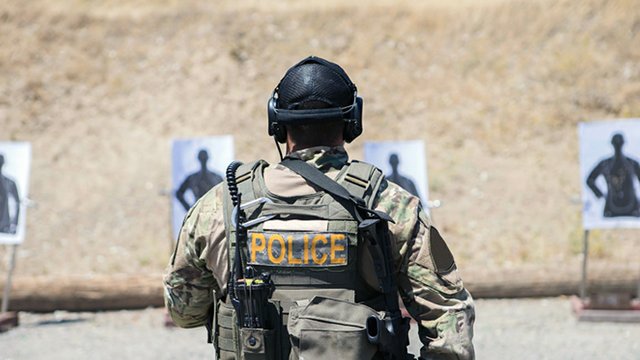 These incidents nearly doubled in the state, up 77 percent between 2017 to 2018. By May 2018, Georgia was already reportedly experiencing a more rapid rise in officer-involved shootings than the rest of the country. According to an investigation of deadly police shootings in Georgia, in the six years after 2010, 184 people were shot and killed by police; almost half of them unarmed or shot in the back.

As this has unfolded, Georgia continues to pursue a “police exchange” program with the state of Israel. Run through Georgia State University, the Georgia International Law Enforcement Exchange arranges for American law enforcement officials, corporate security executives, and police officers to engage in training, briefings, and seminars with governments including that of China, Colombia, Egypt, Hungary, Kazakhstan, Uzbekistan and the original and primary focus of the program, Israel.

For twenty-seven years, police departments in Georgia have received grants from the U.S. Department of Justice that subsidize these trainings. Since the program’s inception in 1992, it has trained at least 1,700 participants, including officers from the Atlanta Police Department.

Open records requests have forced program leaders to reveal some of its content topics, including border policing, community policing, and urban policing.

Activists in Georgia are pushing for an end to Atlanta’s police exchange program. Seventy local organizations and leaders—including our organizations, Jewish Voice for Peace-Atlanta and Project South—are demanding that Atlanta get out of these deadly police exchanges.

Among other objections, activists point to Israel’s clear record of human rights abuses and state violence toward Palestinians, Jews of color, and African refugees. According to the United Nations Office for the Coordination of Humanitarian Affairs, 2018 brought a 69 percent increase over the previous year in Israeli settler violence toward Palestinians, and a rise in Palestinian deaths and injuries in Gaza. In the year since 2018 Great March of Return demonstrations began, more than 190 Palestinians were killed and 28,000 were injured by Israeli Forces.