[ Editor’s Note: You really can’t make this stuff up. The US and UK have spent years trying to destabilize the Hong Kong government, a game that Britain has a much longer history in doing then the US, who was once on the short end of the stick until the Neo-Americans, including my ancestors threw them out.

So it is a sad twist of fate to see my country become a subversive Neo-colonizer. Unfortunately, as George Washington always warned, having a huge standing army would build up pressure to justify its expense by doing what generals throughout history have often wanted to do, conquer new territory.

Nowadays such an endeavor is a very sophisticated project, infiltrating, co-opting internal opposition and weakening the targeted country until the time for the shooting and killing is right.

The list of countries that the US is probably undermining at this time would shock many Americans. A lot of our defense budget is actually being invested in offense, and surprisingly this has not been much of a political issue with either party at election time.

The US has openly shifted focus from the MidEast quicksand to the open waters of the South China Sea, another chapter of what for cover is called a trade war. But it is just one more step in the US seeking full spectrum dominance.

So no, the Chinese are not going to sit like a lump on a log and let Trump and Johnson do the slow termite tunneling of the Hong Kong regime. Western provocateurs have put Hong Kong in play purely as part of their new Cold War which requires creating internal chaos prior to the day when the shooting begins.

The US and UK have attacked Honk Kong’s autonomy, for conquest and profit, as they sure as hell don’t care about the people. Do you really think a Trump or a Johnson really care about anyone but themselves, when they wear their narcissism on their sleeves… Jim W. Dean ] 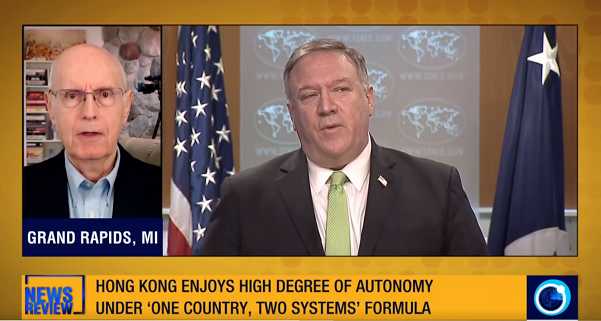 China warns western governments to stay out of its internal affairs amid a row over a national security law for Hong Kong.

The Chinese Foreign Ministry also condemned Washington’s approach toward the national security bill as totally unreasonable and senseless. It also accused the US of taking the UN hostage.

The reaction came after the US and Britain succeeded in securing an informal discussion about the legislation at the UN Security Council.

China says the measure that has been approved by its parliament will tackle secession, subversion, terrorism and foreign interference in Hong Kong. Opponents say the law could be a death blow to the city’s freedoms.