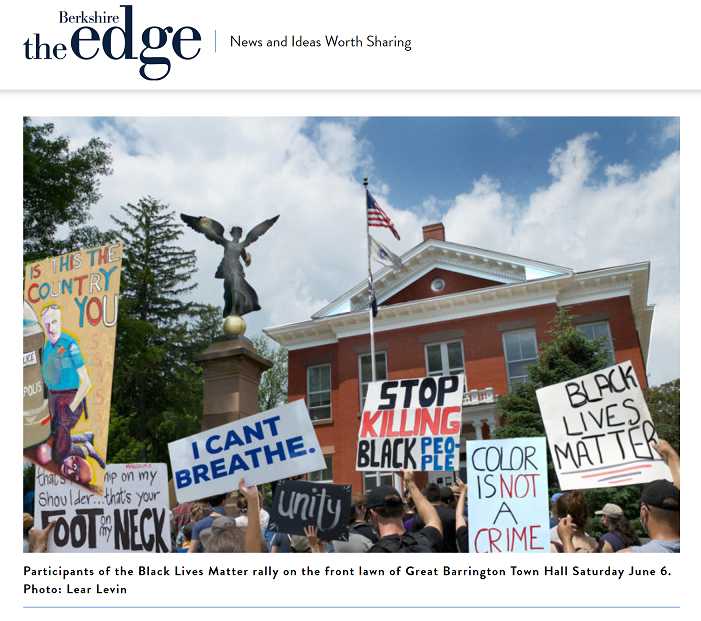 [ Editor’s Note: Great Barrington earned these kudos for putting 1000 people in front of the Colonial era town hall when the town’s population is 2500, and this may be a hint as to why it was chosen as the best small town in the US for 2012.

Smithsonian Magazine cited the town for its “big city smarts and its New England sensibilities”, and that was certainly on display on June 6th, as it joined Americans in putting on its best face to tell the world it is time for real change in law enforcement and race relations.

The town embodies New England Heritage, and we had recently celebrated George Washington’s historic passing through the town with his captured cannon from Fort Ticonderoga on his way to lay siege to the British in Boston.

Cofounder of the NAACP, the notable W.E.B DuBois (1868–1963) was born in Great Barrington, a mere two miles from my house, and his mother was a member of my mother’s Congregational Church. The church provided funding for DuBois’ college years at Fisk University.

I shared this anecdote with Dr. Henry Lewis Gates when he was our guest at the Sons of Confederate Veterans Convention in Concord, North Carolina, when the Convention was shooting footage for his “Looking for Lincoln” PBS film.

Gates had been invited as an honored guest because the family of a black Confederate was being honored at the Convention. The presentation being made by the African American director of the Georgia State archives, who had been astonished to find the material at the insistence of the soldier’s granddaughter that her ancestor had been a Confederate Soldier.

Gates had gone on record claiming that the stories about Black Confederates were hoaxes, but I have to give him credit.

As he was stepping into his limousine to leave, he hesitated, turned to us and said, “Fellas, I’m sorry, I was lied to”. It was a special, but hitherto unknown movement, in American race relations, which starts with having an open mind and the ability to listen.

The mix of the Great Barrington George Floyd crowd was similar to the rest of the country over the weekend, with lots of young people, plus a mixture of all ages and all levels of society. The town joined hands with hundreds of other towns and cities, and across the world, to stand together for real change in race relations.

It was a weekend that saw Donald Trump’s attempt to divide the country via his threat to invoke the Insurrection Law to put the US military on the streets of America without a governor’s request, which ran into a brick wall.

He and Attorney General Barr possibly joined Derek Chauvin, Floyd’s murderer, in being the most hated men in America, against a backdrop where ex-Justice Department, ex-generals, and past top Defense Department officials spoke out to deplore Trump’s threats to use US troops on American streets to play America’s great defender in an election year political stunt.

The American people nailed the door shut on that happening this past weekend, and what VeteransToday believes will be any chance of Trump being reelected in November.

I had written a tour guide of my native Berkshire county in 2012 in appreciation of what a fabulous place it was to grow up, and it still is, so it was a kick for me to find this article, forwarded by a VT reader.

At the end of this Berkshire Edge article, watch Eoin Higgin’s video of Great Barrington joining hands with hundreds of communities across the country in sharing a great day and making some history … Jim W. Dean ]

Great Barrington – Joining Black Lives Matter demonstrations nationwide, upwards of 1,000 people gathered in front of the historic Town Hall Saturday afternoon (June 6) – a crowd so large that it spilled into Main Street — to proclaim its outrage at the deadly mistreatment of black citizens at the hands of  police, and to listen to speakers decry the seeming sanction of racism seeping into the fabric of American life.

In part organized by 18-year-old Calista Nelson and her friend Langston Stahler, the protest was prompted by the death of 46-year-old George Floyd, who died May 25 as a white Minneapolis policeman, Derek Chauvin, ground his knee into Floyd’s neck, after he had been handcuffed and was lying on the pavement, for 8 minutes, 46 seconds, asphyxiating him as he pleaded that he could not breathe.

A video recording of his death went viral, prompting worldwide condemnation and instigating demonstrations in cities and towns across the U.S.

His murder at the hands of police – so vividly recorded – instantly came to symbolize not just racial injustice but also a broader sense that our country is being victimized by an authoritarian mindset that is infecting and afflicting our institutions.

“It has taken a long time, but I think we can now all agree that there is racism in our system of justice,” declared State Sen. Adam Hinds, in his remarks to the rally.

“I think we can now all agree that when you have extreme income inequality and you enter a recession — as we have right now — it is black and brown workers who are hit first, hit hardest, and will feel the downturn longest.

“I think we can now all agree that when you have unequal social determinants of health, people of color end up dying at greater numbers during a health crisis as we are watching right now with COVID-19.

“I also think we can all agree we have not seen a moment with this energy and widespread action in generations, I haven’t seen an opportunity like this to address inequity in my lifetime. This is a moment pass we cannot let pass.

“But there is something I am not convinced we can agree on. Can we all agree that we commit to being committed anti-racists?

“Are we all willing to monitor closely our thoughts, words and actions? Will we take the difficult and uncomfortable actions to stand up to others, or make the deliberate choices in how we educate our children if you are a parent, hiring decisions if you are a manager?

“There is one more thing. Will you stand up for changing state laws? This is the time to commit ourselves to endorse anti-racist legislation that protects the rights of Black and Latino citizens. Last week, the Black and Latino Legislative Caucus stood in front of the Massachusetts State House and outlined an agenda for action. It includes critical action, such as removing the use of choke holds by police. As legislators face difficult votes and conversations, will you be there to stand up for change?

Berkshire District Attorney Andrea Harrington explained that she had sent condolences on behalf of her office to the parents of George Floyd.

“It sickens me that the prosecutors in this case didn’t immediately seek murder charges, until there was intense public pressure,” she said. “But I have the hope of seeing this current generation bring racial justice to this country at last. We need a big structural change in law enforcement.”

Dennis Powell, president of the Berkshire NAACP chapter, had a far harsher assessment. He termed the murder of George Floyd equivalent to the practice of lynching inflicted upon blacks by white racists.

But Powell insinuated that Israelis may have been, in a roundabout way, responsible for Floyd’s death, offering the theory that the techniques used by the Minneapolis Police to subdue Floyd were the result of training by Israeli security forces who use similar methods to subdue Palestinians.

“The training of U.S. police officials by Israeli forces is widespread,” Powell asserted, identifying Jewish organizations as sponsoring such training. He called on “Jewish brothers and sisters” to urge these organizations to call a halt to sponsorship. “Tell them to stop funding and training our police in terrorist techniques because our American citizens are young, old, middle age, Black and Brown people who are not terrorists. It’s got to stop, and it’s got to stop yesterday!”

“What are you going to do?” she asked her audience. “How have you been touched by racism? We can do better. We cannot let this end here. I’m going to stand up and say, ‘no more’.”

The following video of the protest was created by Eoin Higgins: