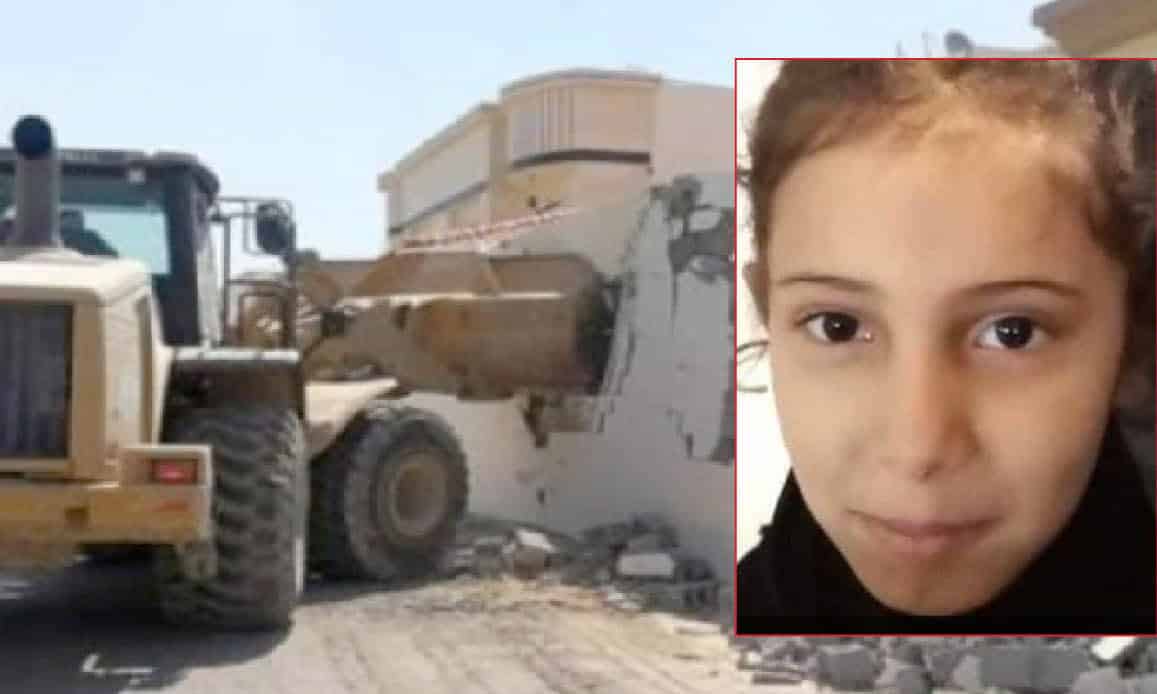 At the age of 11, she would have died crushed by the rubble of her home torn down by bulldozers. From the Kingdom of Saudi Arabia comes the tremendous story of Noura first reported by an Arabic website and then by PressTV, the television in English of the IRIB (Islamic Republic of Iran Broadcasting), by Middle East Monitor (MEMO) and by Uprising Today.

«Humanity is nonexistent. Here an innocent girl was run over because her family built these houses in the wrong place» Tweeted @bodour_alyami attaching the video of the destruction that immediately went viral with over 190 thousand views.

The tragedy occurred in the southern Asir region of the Harajah governorate. «She died on Wednesday as several bulldozers were ordered to raze buildings alleged to have been constructed without permits – told Middle East Monitor – A report by the New Khaleej yesterday revealed that Noura was killed while she slept in her home»

It is hoped that she died immediately under the rubble and not after a slow agony. Images of the slain child and video footage of the demolition circulated on Twitter, with the hashtag “Critical assaults kill the girl Noura” in Arabic being used to highlight the crime.

But no other news has leaked from the official sources of the Kingdom of Riyadh who in the past has been very skilled in burying between many mysteries and an ambiguous sentence the truth about the death of the journalist Jamal Kashoggi, killed and torn to pieces to hide the corpse inside the consulate  Saudi Arabia of Istanbul on October 2, 2018.

The dramatic story of Noura also emerges in a context of political and religious rivalries because in April, Saudi forces shot and killed a citizen who refused to leave his home to pave the way for the construction of the so-called mega-project NEOM of the Crown Prince Mohammad Bin Salman.

Abdul Rahman Al-Huwaiti was a prominent member of the Al-Huwaiti tribe, which had lived in the north-western area Al-Khuraybah for hundreds of years. Eight tribal members were arrested days after his murder.

But as early as August 9, 2017, as PressTV points out, a violent campaign of the regime against political dissidents had started in the eastern part of the country and precisely in the city of Awamiyah, populated by Muslims of Shiite confession hated the Sunni Wahabites of the royal family, suspected to be among the founders and main recruiters of Al Qaeda fundamentalist militiamen.

On April 13, Saudi regime forces killed dissident tribal activist al-Howeiti because he «had censured the House of Saud over uprooting Saudi nationals for the sake of a project that runs counter to the history and traditions of the region» highlighted Teheran’s TV.

Saudi Crown Prince Mohammad bin Salman announced the contentious NEOM tourism development project at an international conference in October 2017, which will turn 50 islands and other sites on the Red Sea into luxury resorts.

The plan is also supported by the Israelis who, through the Check Point Software Technologies company, have taken on the task of protecting the cybersecurity of the megacity.