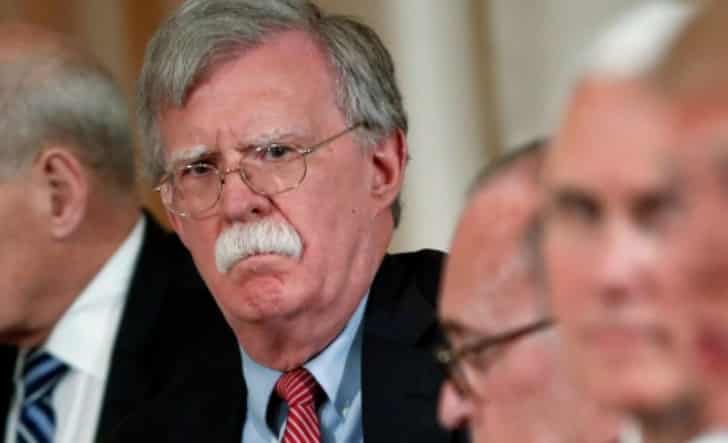 Deep State attempts to hide the fact that Trump and Barr are criminally insane.  Good luck with that one.

(CNN)The Trump administration asked a federal judge on Tuesday to order former national security adviser John Bolton to stop the publication of his upcoming book on his White House tenure, arguing in a lawsuit that Bolton had breached a contract and was risking the exposure of classified information.

And there it is: Trump's Department of Justice is suing to stop John Bolton from publishing his book on Trump. The lawsuit references possible "criminal penalties" for any "unauthorized disclosure of classified information." pic.twitter.com/3glJ9SiYKT

The suit, filed in Washington, DC, federal court, alleges that Bolton’s 500-plus page manuscript was “rife with classified information,” and prosecutors say that Bolton backed out of an ongoing White House vetting process for the book that he’d been obligated to do as a result of agreements he’d signed.

Now that we have your attention @AmbJohnBolton, please also see the ACLU statement on your atrocious human rights record. https://t.co/GWZNZCj9Lz

“(Bolton) struck a bargain with the United States as a condition of his employment in one of the most sensitive and important national security positions in the United States Government and now wants to renege on that bargain by unilaterally deciding that the prepublication review process is complete and deciding for himself whether classified information should be made public,” prosecutors write.

The lawsuit marks the latest White House effort against Bolton after months of back-and-forth between the National Security Council and Bolton’s representatives over whether the book contains classified information. Simon & Schuster previously announced that Bolton’s book, “In the Room Where It Happened: A White House Memoir,” would be released on June 23.
The Atlantic: According to his publisher, the memoir will be the “most comprehensive and substantial account of the Trump Administration,” a chronicle of a “President addicted to chaos, who embraced our enemies and spurned our friends, and was deeply suspicious of his own government.” Bolton will apparently argue that Donald Trump committed not one but many impeachable offenses. As Mike Allen and Jonathan Swan report at Axios, Bolton “will go beyond Ukraine” and make the case that Trump engaged in similar wrongdoing across the scope of his foreign policy.

The book, slated for publication on June 23, will come out to a hostile audience—or, perhaps we should say, several hostile audiences. The White House announced it believes that the manuscript contains classified information and needs to be revised—and this after the book’s publication date had already been pushed back twice because of government review. Bolton’s lawyer responded in a Wall Street Journal op-ed, arguing that the administration is turning the review process into “a pretext to censor Mr. Bolton.”

And Bolton doesn’t have many friends outside the White House, either. He seems to be doing his best to present himself as a principled whistleblower going head-to-head with a White House trampling his rights. But his welcome within anti-Trump circles has been decidedly frosty. Democratic Representative Mike Quigley, who serves on the House Intelligence Committee, suggested to Politico that anyone who wants to see what Bolton has to say should borrow his book from the library, rather than give the former national security adviser any money. Clicking on any of #JohnBolton’s recent tweets, meanwhile, reveals a cascade of replies calling him a coward and accusing him of selling out his country for book profits.