[ Editor’s Note: China will now “show its stuff” to the rest of the world and set the benchmark on how to deal with new outbreaks of Covid by ordering quick lockdowns to prevent the clusters from growing.

By just the second day, it had tested over 40,000 citizens, and that included all of the market employees. Expect to see contact tracing to be just as quick, as will the testing of the contacts. Could a major US city move this fast? Hardly, especially if it had Black Lives Matter protests going on.

If an outbreak occurs at the Republican convention, it will get spread on the planes home to other passengers and on to all their families and coworkers over the next week, creating a thousand hot spots, and the US will be off to the races chasing its behind once again.

Would Trump claim it was a new China virus attack on the US? You betcha! That’s how he rolls. China once again is starting from the best possible point. The rest of the country has zero infections, so it can now focus all needed resources to nip this in the bud.

You can bet that markets all over China are going to be doing rolling spot testing to make sure they catch any new Covid surge quickly, to lockdown the neigborhoods and contain it with minimal economic damage.

Maybe we will see China running online real time briefings on how exactly they are containing this new outbreak so other countries have no excuse to claim they did not know to do it.

The US used to be in a better position, before the incoming Trump team dismantled the health disaster response unit, as they viewed the Obama administration’s attempts to get them up to speed on disaster response as wasting their important time, with the Trade Secretary falling asleep during the meetings… Jim W. Dean ] 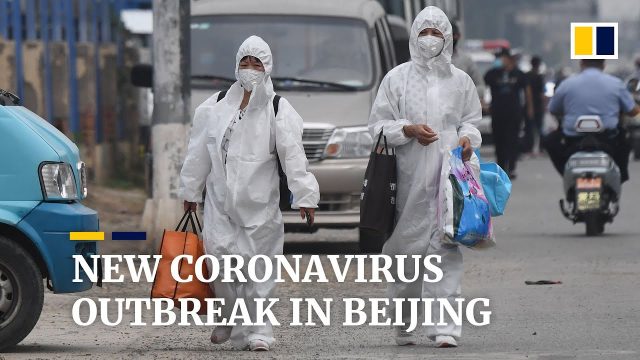 In response to the new coronavirus outbreak connected to Xinfadi wholesale market in Beijing, the city has introduced strict quarantine measures in 10 neighborhoods in Haidian District.

For the second day in a row, after months of almost no new Covid-19 cases, China has reported dozens of new locally-transmitted infections – including 36 in Beijing, where a new cluster was discovered several days ago.

The new outbreak in the capital was linked to a large food market, Xinfadi, which was promptly shut down on Saturday, along with several other markets in the area, as well as schools and kindergartens.

Mass screening was ramped up in the area, with more than 41,510 people tested as of Monday morning, including all workers and traders at the market – around 10,000 people.

The virus, however, managed to spread to another market, Yuquangodn, in Beijing’s Haidian District, where several employees tested positive for Covid-19, and all had ties to Xinfadi. As result, 10 neighborhoods were closed off in the area on Monday.

Chinese Vice Premier Sun Chunlan warned of “high risk” of the coronavirus spreading further in Beijing and called for the “strictest” investigation to determine the source of the new hotspot. In the meantime, several senior officials in the capital’s Fengtai District, where Xinfadi is located, were fired for failing to properly carry out disease prevention measures.

Ten communities around Yuquandong market in Beijing’s Haidian District were shut down after some market staffers tested positive for #coronavirus, with all of them having links to Xinfadi wholesale market that is at the center of new cases, local official told a briefing Monday.

The novel coronavirus was first officially discovered in December in the city of Wuhan, in China’s central Hubei Province, where the outbreak was quickly linked to a local wet market.

Through strict lockdowns and mandatory quarantines, mass testing, and rigorous contact-tracing, China eventually managed to largely bring the disease under control, with the number of newly-recorded locally-transmitted infections decreasing to almost zero – until last week.