There is no question, Bolton is a liar, he always has been.  Trump needed a liar, one with a history of supporting fake intelligence as Bolton had done when he helped the Israel-o-cons destroy Iraq under the fake presidency of George W Bush, another president who, like Trump, was never elected.

Both elections, according to exit polls, weren’t just impossible, they were clearly rigged.  During what little Trump recount was done, Wisconsin in particular, precincts voting at over 110% were found, nearly 100% Trump, many of them, and the reporting was quashed and watchdogs bought off by the Israel lobby.  It was like watching a slow-motion train wreck (as are most things nowadays).

Let’s look at what Bolton is saying so far.  He accuses Trump of playing up to Saudi Arabia, where Trump actually covers up the murder of Kashoggi by suppressing evidence (from the CIA).  This is a crime:

A person who learns of the crime after it is committed and helps the criminal to conceal it, or aids the criminal in escaping, or simply fails to report the crime, is known as an “accessory after the fact“.

Trump is guilty of complicity in the Khashoggi murder and the case is a slam dunk.

Bolton also accuses Trump of being paid off by China, loans, trademarks for Ivanka, business licenses and the same from Saudi Arabia and Turkey.  Where is Bolton lying?

Trump is working for, not Israel as such, but the ultra-nationalist apartheid party, the Likudists, which is made up of Bolsheviks primarily with strong ties to organized crime.  By “organized crime” we mean the Kosher Nostra, with its heart of Jewish-Ukrainian and Jewish Russian mob-lagarchs and their US partners who make up the MEGA group, the board of the ADL and the neocons. 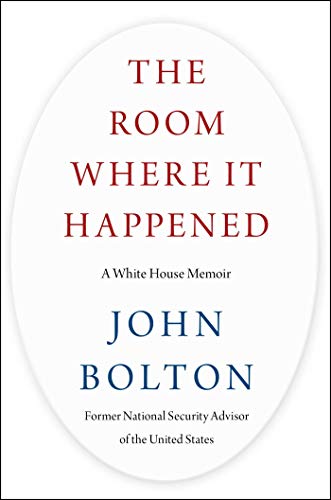 Bolton was their “boy toy” all along and his attacks on Trump, for some very strange reason, leave out the primary criminal acts of Trump’s family business, selling the American military to act as an enforcer for the Kosher Nostra, ostensibly led by Benjamin Netanyahu.

In order to keep the weaklings and cowards of America’s Jewish community on board with mass murder, apartheid and global bullying, the US moved its embassy to Quds, an Arab city with NO native Jewish population and is backing Israel’s expansion into the West Bank, Golan and further, even into Iraq.

This was Bolton’s plan all along and he is the one that led Trump’s policies there, policies both still support, the primary policies of the Trump regime, which makes one wonder why the breakup between two worthless oxygen wasters, a mustache without a man and a haircut without a brain under it.

Yes, we know Trump can’t find Britain on a map or believes Venezuela and Finland are the same country, but who cares about that.  After all, as with so many wealthy and spoiled brats, particularly those who avoided Vietnam like Bush 43 and Trump, the harsh judgment of bad genes has defined their lives, addictions, personality disorders, early-onset dementia, and a streak of sadistic cruelty.

Bolton wasn’t Trump’s boy, he tried to make Trump his boy.  Trump had been the Kosher Nostra’s boy all along and Bolton wormed his way in, talentless hack he is, as Trump surrounded himself with morons and crybabies like Flynn.