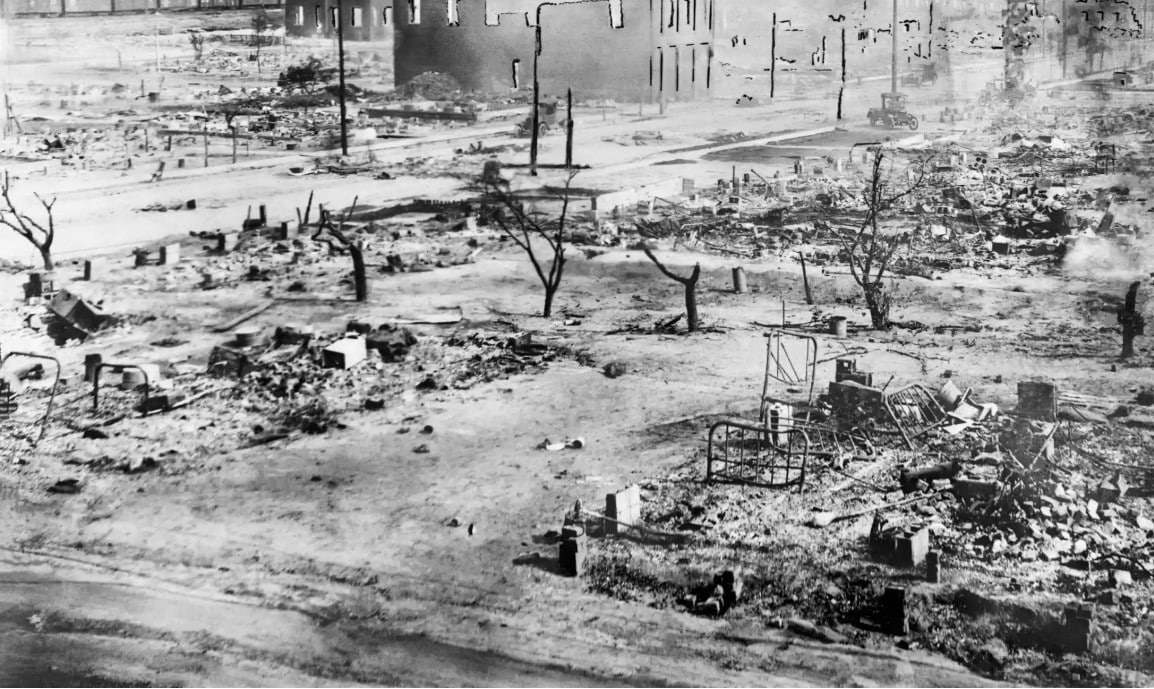 Trump is bringing the Oklahoma National Guard to Tulsa to defend his rally/COVID exercise.  He has threatened to illegally nationalize them and use deadly force against anyone who shows up.

6 planes from the Oklahoma National Guard dropped incendiary bombs on the Greenwood neighborhood, “Black Wall Street,” burning it to the ground, bodies only recently found in mass graves that have been hidden for 99 years.

Guardian: On Saturday, Trump is holding a rally near the site where vigilantes killed hundreds of people to suppress black wealth.

Remember the Tulsa riot of 1921 was the first time the ⁦@NationalGuard⁩ was ever used on United States citizens to drop bomds from planes because they were Black. https://t.co/2rHTjN81mo

On 9 March 1892, a white mob in Memphis, Tennessee, lynched Thomas Moss and his business partners Will Stewart and Calvin McDowell.

May 31, 1921 — The Tulsa Riot of 1921 This is the worst riot in american history.
"A Black Holocaust In America" pic.twitter.com/nDXJlYuUxF

The black men died on the altar of capitalism as viewed through a white supremacist lens.Their food store, People’s Grocery, had successfully competed with a nearby white-owned store. In lynching them, white vigilantes were exacting lethal retribution for the crime of being black men with more business acumen than a white competitor.

As we are living through 2020, it's worth remembering that such violence spikes recur roughly every 50 years. The spike of c.1920 was much worse than that of the late 1960s.

1921 was a particularly dark year. https://t.co/qi0FKY6rAO via @Reuters

The lynch posse sent an unmistakable message to the black citizens of Memphis: black entrepreneurship has limits – and white people determine the height of the economic ceiling.

The journalist Ida B Wells, a crusader for racial justice who railed against lynching and economic apartheid in America, had been friends with Moss, one of the men killed.Wells wrote a stinging editorial decrying that lynching and others as part of a system designed to suppress black business competition. She then left Memphis to attend a conference in Philadelphia.

Trump is having his next rally on Juneteenth—the day the end of slavery in the US is celebrated—in Tulsa, the city where the greatest massacre of Black Americans took place.

A message. Not a coincidence. https://t.co/UlATzEijwv

The Tulsa Riot: Hoisted from the Archives https://t.co/s7PhrsWlAR

While she was away, hoodlums destroyed her office and ran the co-editor of her newspaper, the Memphis Free Speech, out of town. Townsfolk threatened to lynch Wells if she ever returned.

Dr. Olivia Hooker, the first black woman on active duty in @uscoastguard, survived Tulsa’s murderous racist mob attack in 1921. She was 6. “Other people call it the Tulsa riot,” she said in a 2015 interview. “It really wasn’t a riot — we were the victims.” https://t.co/wOWpxG3dsU

Even in the economic sphere, white supremacy in America has a deep and extensive history and legacy. While the color of money may not matter, the color of the moneymaker does. Black economic success, particularly when juxtaposed against white economic struggles, has historically been a catalyst for violence.  Read more..