[ Editor’s Note: Rafi Sheikh teams up with the EU’s Josep Borrel to give us an update on China’s developing relations with the EU while under trade agreement pressure from the US, including gunboat diplomacy with the Navy being deployed to the South China Sea of troubles.

The EU has been doing a high wire act trying to maintain some positive US relations while under trade issue pressure itself, including critical long term energy security under the US threat of sanction on the second Russian pipeline, while Trump has done everything he could to block it.

It is a ludicrous effort with the world awash in gas and oil with zero need for the EU to import expensive LNG from the US. With the pandemic’s economic devastation in Europe, the US unipolar squeeze on the EU will create more public backlash.

This would create many opportunities for a new Biden regime, if it can win the election that now seems like Trump’s to lose. Only the Israelis may be able to save Trump with electronic vote flipping, which may be one of the reasons Trump has been so unhappy about mail in ballots.

The EU and China are both opposed to the concept of American unipolarism, but do they want hostile relations with the backdrop of a new Cold War emerging between the US, Russia and China, which would leave the EU where?

Meanwhile Russia and China continue to build their gold reserves, banking on the day when the huge US debt forces a currency devaluation. While bad for the US asset position, it would make US exports cheaper, and challenge China’s low price dominance.

The phrase for this in warfare is, “The issue remains in doubt” … Jim W. Dean ] 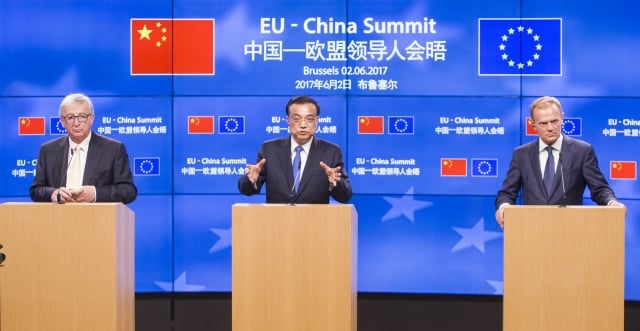 Given the way the US-European alliance is falling apart rapidly, there is little to no denying that some tectonic changes of global level are likely to take place, paving the way for a kind of multipolar world order to emerge where the US ability to influence the world will decrease massively.

A decreasing US influence on Europe and an equally increasing European assertiveness vis-à-vis the US unilateralism shows that Europe would not simply become a junior partner of a new super power i.e., China.

Europe, as it seems, will become one major ‘polar’ in the new multipolar world. Accordingly, Europe is most likely to use China as a means to diversify its reliance on the US and use it as a leverage. China, on the contrary, is setting itself up already to fill the void US policies are creating and redefining its relationship with Europe.

This, however, is unlikely to be a smooth process. Europe, as an emerging polar itself, would surely want to write terms of this new relationship in a way that allows it considerable leverage vis-à-vis the new global power in the post COVID-19 international system.

The recently held 10th annual Strategic Dialogue between China and the EU symbolises the broader contours of ‘big power diplomacy’ looking to redefine the world political, economic and financial system in the post COVID-19 world.

This dialogue has also set the stage for EU-China summit to be held at a later date. The importance of these events can be gauged from the fact that these will take place on the ruins of the recently cancelled G7 summit due to the prevailing disagreements between the US and its allies—Europe and Canada.

With both the US and Europe devasted by the impact of COVID-19 and with China having already recovered a lot, the latter becomes a natural option for Europe to look towards to fill the deep economic wounds and help pave the long road to recovery. In the absence of US, Chinese investments in Europe might thus become the key element of Europe’s post COVID-19 life.

Europe is aware of this necessity and that is why its top diplomats can be seen increasingly emphasising the need to redefine their erstwhile uneasy relations with China. For them, China is ‘not a military threat’ for Europe. Josep Borrel, who was part of the China-EU strategic dialogue event, said that China is not a ‘threat’ to world peace.

“They committed once again that they want to be present in the world and to play a global role but they don’t have military ambitions and they don’t want to use the force to participate in military conflicts,” he added.

This line of thinking is markedly different from the US national security strategy that defines China as a ‘revisionist power’ bent upon bringing ‘disorder’ to the US dominated world. Josep’s views put him at odds not just with the US but Japan and India and a hots of other countries in Asia as well, which are increasingly worried about China’s increasing military strength in the Himalayas and South China Sea.

For Europe, however, it was China that came to Italy’s aid when the latter was being devasted by the pandemic. The US, otherwise an ally, did not only not come to Europe’s aid, but chose to erect its own walls to, unsuccessfully though, insulate itself.

Unlike the US, Chinese leadership has been busy keeping itself deeply engaged with Europe. China’s Xi has already telephoned German chancellor four times in this year alone. As far as France is concerned, Xi and Macron have already spoken five times since the beginning of this year, indicating the extent and the depth to which China is cultivating its relations with Europe.

The impact this ‘extent and depth’ is leaving is evident from Borrell’s remarks, whereby “China is without doubt one of the key global players. This is a fact, and China will increase its global role. We have to engage with China to achieve our global objectives, based on our interests and values.”

Moving increasingly towards an accommodationist mindset, the EU leaders are looking to downplay the significance of what some US leaders have called an ‘authoritarian’ Chinese political system.

At the same time, EU, being an emerging global player no longer subservient to the US, would aim for a relationship with China where it has a level playing field. It would be too early to say that China and EU have already found a magic formula to accommodate each other.

While it is a fact that both EU and China have come closer in the wake of an aggressive US approach to both of them, a single ‘US factor’ is unlikely to integrate both entities in a long-term strategic partnership.

While certainly, EU-China relations are no longer ‘confrontational’ and are increasingly being grounded in realism, irritants—particularly those in the form of US resistance to Chinese influence in Europe—will continue to appear as in the case of Huawei and 5G technology.

Europe, including Britain, has thus far successfully resisted US attempts at derailing Chinese projects, implying thereby that Europe will deal with China in its own way, following its own approach. What this approach looks like is already becoming sufficiently clear.