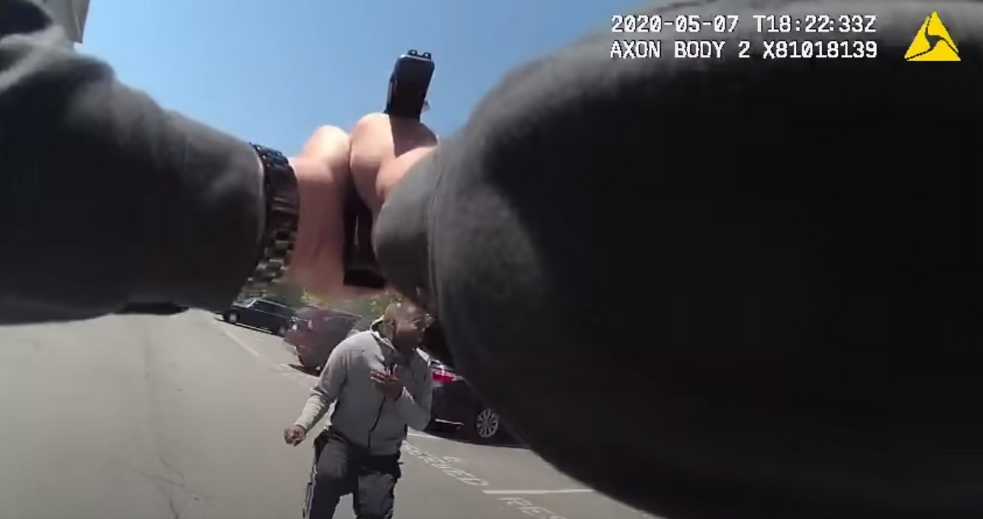 [ JD Note: Finally we get to see what clearly seems to be a clean police shooting, a clearly unstable knife wielding man, after backing away from the officer, runs at him with the knife and catches five rounds for his effort.

It looks like a death by cop incident to me. Fortunately there were no other casualties. This was a May 7th incident.

Update: Gordon has viewed this video. He used to train cops and State troopers in these situations. First, he says the neighbor reporting a brick through the window by a guy with a knife, that indicates a mental case. Officers are not supposed to engage alone, but wait for backup.

Two, guns are only supposed to be drawn when you are going to shoot. To do otherwise escalates the situation. Screaming at them also escalates and can trigger an attack.

Gordon never drew his gun once in his years of various law enforcement gigs, and thinks the training here needs to be reviewed. We do not know if anything was clipped off the front of this video, but deescalation is the name of the game in all of these instability situations which begins with non-threatening conversation.

And last he said, the most dangerous call, the most hated, was a domestic disturbance call. If the husband slugged her again in front of you, while you were cuffing him you had to make sure the wife could not give you the kitchen knife in the back, “don’t hurt my husband” treatment. Welcome to the real world … JD]

The fatal shooting, which was recorded by a body camera worn by the police officer, is said to have taken place on Thursday in White Oak, Montgomery County, Maryland, United States.

The Montgomery County Department of Police in the US state of Maryland has released on Friday video of an officer fatally shooting a man who appears to be intending to stab him with a knife.

The police officer, identified as Montgomery County Police Sgt. David Cohen, was heard in the video shouting to a man, identified as 30-year-old Finan H. Berhe, formerly of the White Oak area of Silver Spring, to put down the knife and get on the ground.

Berhe appeared in the video to first rush towards Cohen with a knife, before stepping back between cars parked on the side of the road. Berhe again rushed towards the officer, who shouted “Put the knife down! Get on the ground! I don’t want to shoot you!”, prompting Cohen to shoot him five time in the chest.

The police officer was said to have immediately rendered first aid to Berhe, before the latter was sent to hospital, where he died, according to The Washington Post, citing Montgomery County Police Chief Marcus Jones.

Jones reportedly narrated that the story began when a neighbor of Berhe called the police and reported that the latter had thrown a rock through his window and told him to call 911.

The Montgomery County Police Department said in a statement that they are currently investigating the incident. Cohen, a 17-year veteran of the department, has been placed on paid administrative leave pending the outcome of the investigation.