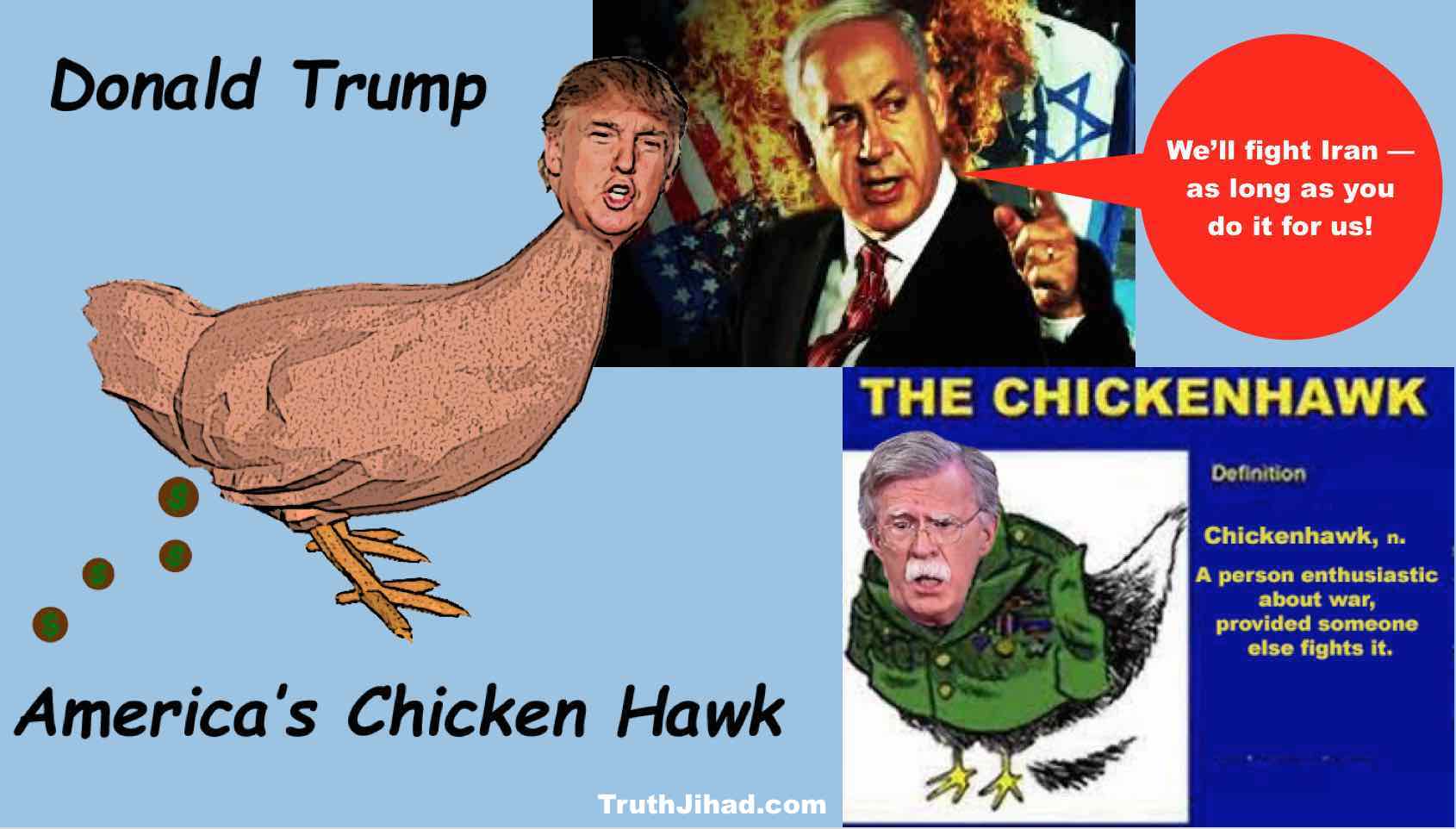 “So what are we to make of these two evil clowns, with Trump being mostly clown, and Netanyahu being mostly evil?”

John Bolton has leaked the manuscript of his new unapproved book about his experiences in the Trump administration. And of course, the top headlines are that Bolton is confirming all these other reports that Trump is incompetent. And also, I think Bolton is echoing earlier reports that the hawkish side of the national security deep state doesn’t find Trump a very good leader, because Trump is not reliable, and his instinct is to try to stay away from large wars.

Now Bolton tells us that he joined the Trump administration with hopes of getting some large wars, especially with Iran. Bolton is part of the Netanyahu axis, which seeks a big Middle Eastern war on Iran, and Bolton apparently pressured Trump to try to get that going. And Trump told Bolton according to Bolton’s book that Trump had already told Netanyahu that he would support any Israeli attack on Iran.

Of course, what Trump didn’t say here, and Bolton is kind of highlighting, is that Trump is not interested in attacking Iran himself. Now from Netanyahu’s perspective, apparently Trump’s reassurance wasn’t good enough because Israel has not attacked Iran.

There have been reports in the past that Netanyahu wanted to and was restrained by more level headed people in his own government.

So what are we to make of these two evil clowns, with Trump being mostly clown, and Netanyahu being mostly evil?

Well, they’re doing a kind of a dark comedy routine here. They’re both afraid to attack Iran. It’s kind of humorous. If you look at the statistics about Iran’s economy, its military and so on, it’s nowhere near the level of the US, and even in terms of the military Israel has hundreds of nuclear weapons, they admit to nearly 100, but they have probably 400, and they are armed to the teeth and funded and supported by the world’s wealthiest and most powerful nations starting with the United States.

And yet Israel is terrified of Iran, so terrified by Iran’s truth-telling that Israel feels the need to try to trick the Americans into fighting Iran on behalf of Israel. Whereas Trump is a chest-thumping braggart and basically a coward and a bully who is always willing to say things, and was willing to launch a cowardly sneak attack ambush of General Qassem Soleimani, who would have been… the future president, and he’s not willing to actually have a war—as was shown when Iran just utterly smashed and demolished the US military base in Iraq in retaliation. And Trump sat in his hands and did nothing.

So both Trump and Netanyahu preside over these huge but totally corrupt militaries and countries. And they’re both afraid to go after Iran. And they’re both kind of saying to the other guy you do it. No, you do it, I’m afraid to take on Iran. You do it and I’ll have your back. And Trump says to Netanyahu I’ll have your back, and Netanyahu kind of says yeah right, sure you will. And he knows that Trump is always going to back down.

So it’s actually kind of funny here. The world’s most powerful and corrupt groups are desperate to try to end the Islamic Republic, but they’re afraid to do it, and they’re bumbling and they’re tripping over each other’s feet. It’s kind of a tragic-comic approach to trying to attack Iran.

So, you know, it brings up the Quranic line: “They plot and Allah plots (plans) and Allah is the best of plotters (planners).” And thus far, the enemies of Iran have been foiled at every turn by their own idiocy, their own hubris, and it may be, by the will of God.

The US is waging all-out war on Iran and other independent nations by other means, Stephen Lendman writes.