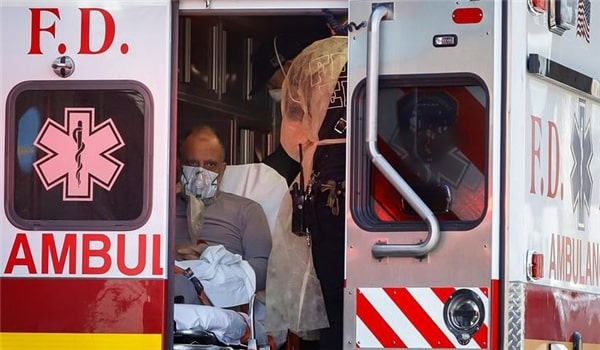 TEHRAN (FNA)- Coronavirus hospitalizations in Arizona and Texas hit record numbers as cases continue to surge in states in the South and the West, overwhelming medical professionals.

More than 36,000 new coronavirus cases and over 830 additional deaths were reported in the United States on Tuesday, according to a Johns Hopkins University tally.

The national total has topped at 2.34 million virus cases, including at least 121,200 fatalities, according to JHU.

Several US states have set records for the highest numbers of new COVID-19 cases reported in a single day as the fatal virus continues to spread throughout the United States in recent weeks. Many states in the United States have also reported big jumps in the number of virus cases as much of the country reopens after months of quarantine.

Dr. Anthony Fauci, director of the National Institute of Allergy and Infectious Diseases, told the House Energy and Commerce Committee on Tuesday if the United States doesn’t get control of the coronavirus pandemic by fall, “You’re essentially chasing after a forest fire”.

Fauci, along with other top health officials, made it clear that he believes the fatal virus will continue to be a concern well into the fall and coincide with flu season, despite President Donald Trump’s repeated efforts to downplay the severity of the outbreak.

The US administration’s top infectious disease doctor warned that the country’s response to the COVID-19 pandemic has been a “mixed bag”, adding that a new increase in cases is “disturbing”.

The rise in the US comes as the administration has sought to paint a rosier picture of the US outlook. Both Trump and Vice President Pence have inaccurately tried to attribute the increase in cases to more tests being performed.

But Fauci stressed on Tuesday that the nation needs to do more testing for the coronavirus, adding that to his knowledge, he and other top administration officials have never been told to slow down testing, as Trump suggested during a campaign event on Saturday.

Trump sparked outrage when he said during a rally in Tulsa, Okla., that more testing makes the country look bad by identifying more coronavirus cases, noting that he had told his staff to slow down testing.

“I don’t kid,” Trump stressed on Tuesday when asked whether he made the comments in jest.

Centers for Disease Control and Prevention (CDC) Director Robert Redfield also told Congress on Tuesday that the United States has about 28,000 contact tracers, falling short of the 100,000 that are needed to track the spread of coronavirus.

The US public health chief said coronavirus has “brought this nation to its knees”, adding that core public health capabilities in the US had been vastly underfunded for a long time and needed urgent investment.

Former United States Centers for Disease Control and Prevention (CDC) Director Dr. Tom Frieden stated that the country is not doing enough to keep the COVID-19 pandemic at bay.

“We may be sick and tired of staying home, but the virus is not tired of making us sick,” Frieden told CNN’s Chris Cuomo Tuesday.

Frieden compared the US’ response to South Korea’s.

Dr. Jonathan Reiner, a cardiologist and professor of medicine at George Washington University stated that Trump either doesn’t understand the two most effective tools for putting the pandemic down or he’s trying to promote a false narrative.

“The President of the United States doesn’t believe, apparently, in the two pillars of our pandemic response: the need to test and the need to wear face masks,” Reiner told CNN’s Erin Burnett.

Trump has refused to wear a mask in public and at meetings and events at the White House. He has also questioned the need for coronavirus testing.

“What he does not understand is that’s how we extinguish the virus,” Reiner said, adding, “That’s how you get people to quarantine. We contact trace their contacts, they stay home. That’s how you drop the transmission of the virus.”

Reiner questioned why Trump doesn’t seem to understand the simple formula that has driven COVID-19 cases down in other countries.

The number of cases of the novel coronavirus worldwide surpassed 9.26 million, according to data from Johns Hopkins University, as the global death toll from the fatal virus suppressed 477,600.