[ Editor’s Note: Israel continues to bomb Syrian and Iranian military positions far from the border area with Israel, degrading Syria’s ability to continue its insurgent fight against the US, Saudi Arabia, Qatar, UAE, and Turkey. 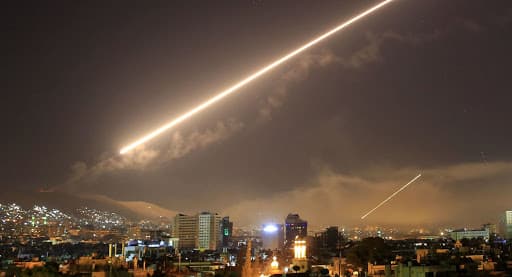 The IDF tactics are working well. It fires dummy air missiles initially to engage the Syrian air defenses and then the real ones to increase their chances of getting through. These ongoing attacks deplete Syria’s inventory of air defense missiles.

Russia has a quiet arrangement with Syria not to use its air defenses which are reserved for protecting “its forces”, and also excludes Iranian forces and anti-terrorism bases.

The video showed a major ammo dump going up, so Syria has not been able to harden its depots against attack. They are, in effect, sitting ducks, waiting for the time when Israel decides to spend some air resources on them, with the US taxpayer picking up the tab by adding it to our national debt.

It has been a sad but successful scam, with our Congress, both aisles, totally onboard, with the twist of also ignoring its nuclear arsenal… Jim W. Dean ]

The Syrian army says two of its soldiers have been killed in Israeli airstrikes in the southeastern province of Dayr al-Zawr.
–

In a statement, the army said four others were injured after their positions were targeted near the town of Suwayda. Israeli warplanes also pounded positions in the western province of Hama as well as areas in the country’s south, near the Iraqi border.

The army statement said Syrian air defense responded to the airstrikes destroying many rockets. Israel has carried out dozens of airstrikes in recent months across the Arab country.