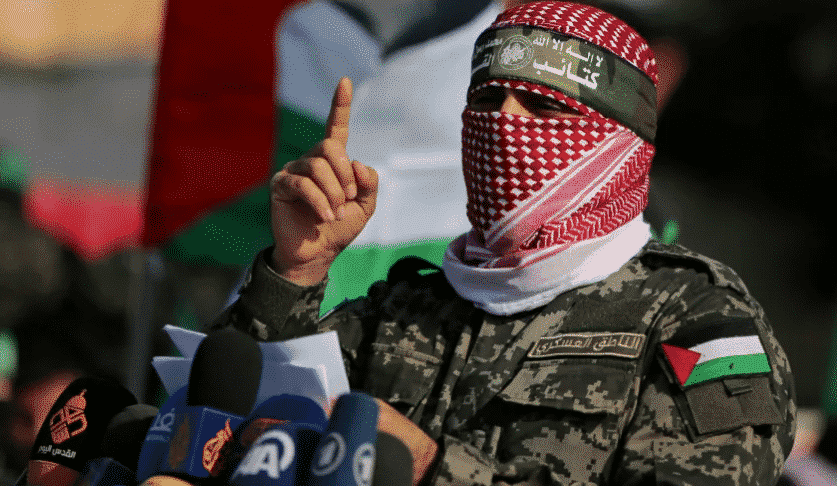 __________
Haaretz
Hamas Says West Bank Annexation Is ‘A Declaration of War,’ Israel ‘Will Regret It’

Hamas would consider Israeli steps toward annexing parts of the West Bank as a “declaration of war,” said on Thursday Abu Ubaida, spokesman of the Gaza-based organization’s military wing.

“The forces of the resistance will faithfully protect the Palestinian people,” he said. “We will make the enemy bite its fingers in regret for such a sinful decision.”

Abu Ubaida spoke on the anniversary of the abduction of Israeli soldier Gilad Shalit, who was taken captive on the Gaza border in 2006 and released nearly a decade ago, in 2011. The operation is remembered as a success by militants in Gaza.

He also vowed to work for a prisoner exchange deal with Israel that would see senior Palestinian leaders released from Israeli prisons. Negotiations have been reported multiple time over the past years, but led to no breakthrough.

Israeli political leaders have expressed intentions to take steps toward annexation as early as this summer, but are facing widespread international appeals not to do so.

In the coalition agreement between Prime Minister Benjamin Netanyahu’s Likud and Defense Minister Benny Gantz’s Kahol Lavan, July 1 was mentioned as the earliest date to launch the process.

The agreement, however, requires American support for the move. On Wednesday, Kellyanne Conway, a top advisor to U.S. President Donald Trump, said he will be making a “big announcement” soon on Israel’s plans.

Meanwhile, the United Nation’s envoy for the Middle East warned Israel on Thursday that carrying out its plans to annex parts of the West Bank could set of a spasm of violence that would upend Israeli-Palestinian relations and reverberate across the region.

Speaking to a group of foreign correspondents in Jerusalem, Nickolay Mladenov, the UN special coordinator for the region, said any Israeli unilateral action will “will have economic and security repercussions on the ground that will affect the lives of both Israelis and Palestinians.”

“Surely any such moves will be met by counter moves by the Palestinian Authority and they have already started,” he said, noting how the Palestinians have absolved themselves from abiding by past agreements with Israel.

On Wednesday, the head of the Arab League warned a high-level UN meeting that any annexation would inflame tensions and endanger peace in the Middle East, and could ignite “a religious war in and beyond our region.” More than a thousand European lawmakers also signed a joint letter protesting Israel’s plan, saying such a move would “be fatal” to hopes for a peaceful resolution of the Israeli-Palestinian conflict.

On Monday, thousands of Palestinians rallied in Jericho against annexation in a mass protest organized by the Fatah political party. Palestinian Prime Minister Mohammad Shtayyeh, Arab and other foreign diplomats, including the ambassadors of the European Union, China, Russia and Jordan, also took part in the event.