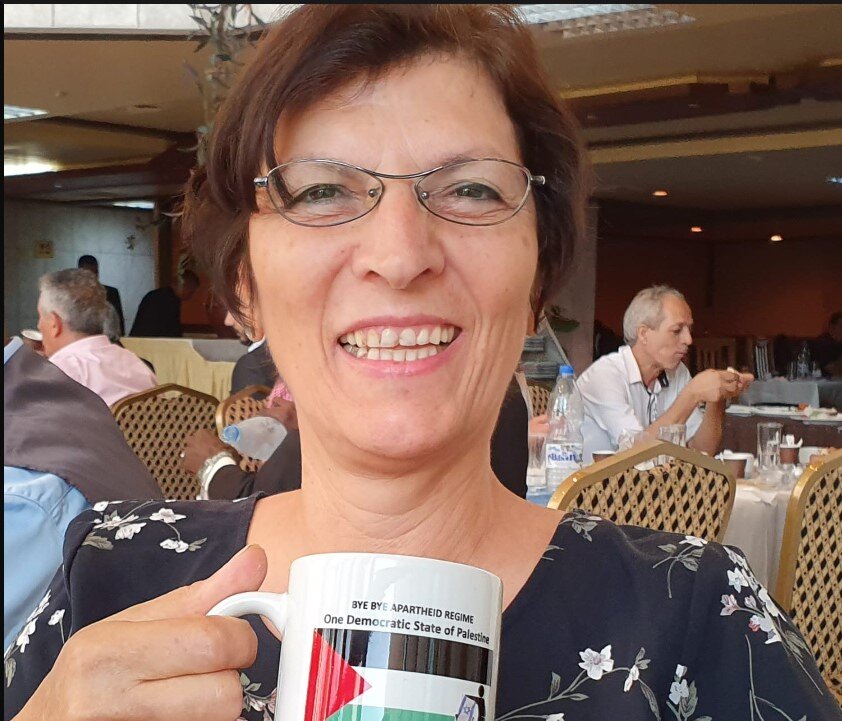 TEHRAN – Amal Wahdan, a Palestinian activist who has been campaigning for the liberation of Palestine, tells the Tehran Times that the plan by Israel to annex the West Bank is a “new apartheid” that Israeli Prime Minister Benjamin Netanyahu “would not dare” to implement without the “approval of Donald Trump and his circle”.

Wahdan, who was founder and editor of the Arab Gazette, says the annexation plan is in line with Britain’s colonial design in West Asia.

“The West Bank annexation plan fits in perfectly within the larger strategy of “Greater Israel’ to ensure the regional superiority of the Zionist entity through Balkanization of the Arab countries into smaller and weaker entities,” Wahdan notes.

“Both troubled and defeated leaders, Netanyahu and Trump need each other’s help in their difficult times in order to remain in office. The former is facing corruption charges that might end his political career if he is indicted and the latter is under constant attack from his adversaries and facing impeachment,” explains Wahdan, a permanent member of the Palestinian Coalition for Economic, Social and Cultural Rights.

Following is the full text of the interview.

Question: Israeli Prime Minister Benjamin Netanyahu, who is facing a number of criminal indictments, has repeatedly said that he would commence cabinet-level discussions for annexing more areas in the occupied West Bank on July 1 in accordance with U.S. President Donald Trump’s so-called “deal of the century” plan. What is your take on it?

Answer: The Zionist colonial settler entity in occupied Palestine intends to further its ethnic cleansing plans against the Palestinian people by moving on with Netanyahu’s West Bank annexation scheme, a promise he made to his ultra-right election constituency and allies.

The proposed plan seeks to annex 30% of the West bank, including the Jordan Valley stretching 85km to the North along Jordan River and larger illegal settlements in the de facto occupied Palestine. This move poses an imminent threat to the livelihood of 60,000 Palestinians who live in the Jordan Valley and depend mostly on agriculture (compared to 6000 Jewish settlers( and to hundreds of thousands who live in rural areas surrounding the larger settlements.

“For over 72 years, Zionists practiced apartheid policies against Palestinian people which is much worse than those practiced in South Africa and like those of Nazi Germany.”
Netanyahu would not dare to go ahead with his plan of annexation without the approval of the U.S. President, Donald Trump, and his circle. Actually, both troubled and defeated leaders, Netanyahu and Trump need each other’s help in their difficult times in order to remain in office. The former is facing corruption charges that might end his political career if he is indicted and the latter is under constant attack from his adversaries.

In return, Trump will guarantee the support of AIPAC and the American Jewish votes. In addition, we have to bear in mind that Trump’s “deal of the century” granted the Zionist colonial entity what they have been dreaming for over the past decades; recognizing “Israel” as a Jewish state and Jerusalem as its eternal capital, supporting the illegal settlements in the West Bank in opposition to UN Security Council Resolution 2334, annexation of the Golan Heights, and the occupied West Bank. With this gift, Trump granted the Zionist entity what he doesn’t own to those who don’t deserve it. Just like what Belfour did with his declaration over a century ago; he granted a Jewish Homeland in Palestine, a land that he didn’t own, to the Zionist movement.

Q: Could we consider this plan in line with the Zionist colonial project of “Greater Israel”?

A: The ideology of the Zionist Movement and Project has developed over the decades as an organic part of the European colonial powers. It came into formal existence at the end of the 19th century with one main theme: the creation of a Jewish Homeland. In the process to materialize this dream, several options were put in place before they spotted Historic Palestine as the most suitable choice, mainly for geopolitical reasons but covered by the religious myth for political tactics.

Most Zionist leaders from Herzel, the founder of the Zionist Movement, to Jabotinsky, Ben Gurion, Moshe Dayan, Ariel Sharon up-to-date Netanyahu have used the religious mythology in their political platforms, speeches, and with world leaders even though none of them was actually religious.

It was Herzl who carved the area of the future Jewish state by saying: “From the Brooks of Egypt to the Euphrates.” Ben-Gurion had wanted Israel’s northern border to extend to the River Litani. While the World Zionist Organization declared a century ago that the Jewish state shall extend to cover all of historic Palestine, Litani Rive, Golan Heights, Hauran Plain, Deraa, to control the Railroad from Deraa to Amman in addition to the Gulf of Aqaba.

Thus, within the framework of the Zionist project, Palestine, which has been inhabited for thousands of years becomes the ‘promised land’ to God’s ‘chosen people’, and empty land for another people (from all over the world) who have no land! The replacement of the people of Palestine with colonial invading settlers became the implementation of a divine promise.

Q: Do you think the U.S. “New Middle East” doctrine was to create chaos and divide the Arab homeland into sectarian entity?

A: The West Bank annexation plan fits perfectly within the larger strategy of “Greater Israel’ to ensure the regional superiority of the Zionist entity through Balkanization of the Arab countries into smaller and weaker entities. This was in fact an extension of Britain’s colonial design in West Asia when the victors of WWI, Britain- France signed the Sykes-Picot agreement. This was the first phase of the geographical division of the Arab Homeland and the creation of the satellite entities of the British colonial empire; Saudi Arabia, Persian Gulf states, carving Jordan, Lebanon, and historic Palestine from the Levant.

The Oded Yinon plan went further beyond the geographic division to the sectarian divide of the Arab Homeland between Muslims and Christians, Sunnis and Shiites. This vision had kicked off in 1982 with the Israeli occupation and invasion of Lebanon and the creation of the Antone Lahed Army south of the Litani River. This war led to the expulsion of the PLO leadership and the scattering of the Palestinian fighters as far as Yemen, Tunisia, and Algeria. The second major blow was the U.S. incitement of Saddam Hussein of Iraq to wage an eight-year war against the Islamic Republic of Iran and its new revolution, which had immense ramifications on both countries. The third was the eruption of what the U.S. and its allies called the “Arab Spring.” This was manifested in a wave of mass demonstrations that swamped the Arab region from Tunisia in December of 2010 to Egypt, Libya and to the torn country of Iraq since the invasion of 2003, to the division of Sudan in 2013, the instigated terror war in Somalia, and the “Arab Coalition” war on Yemen in 2015, led by Saudi Arabia with the support of the U.S. and the Zionist entity.

Despite of the pan-Arab Nakba (catastrophe), millions of casualties among civilians, exodus, destruction of infrastructures, economic sanctions, and devastation, and loss of billions of dollars of national wealth, the Yinon plan of Balkanization of the Arab Homeland failed miserably to achieve its goals as well as the U.S. “New Middle East” doctrine. On the contrary, it drove regional and Arab resistance movements and countries closer in confrontation with U.S. hegemony and Zionists’ expansionist project from Yemen in the South, to Syria, Lebanon, occupied Palestine, Iraq, and Iran as a regional power.

The Balkanization of West Asia is an integral part of U.S. foreign policy. A policy which the U.S. administration under Bill Clinton successfully implemented in the former Soviet Union and the Eastern bloc and managed to dismantle the Eastern bloc but into failed fragmented entities.

Q: The U.S.-Zionist strategy to annex the West Bank would have serious ramifications on the Palestinian Authority, Jordan and Egypt. What are the options left for the Palestinian people and leadership?

A: The U.S.-backed West Bank annexation plan has put an end to the Oslo agreement that was signed between the PLO leadership and the Zionist colonial settler entity in September of 1993 and the two-state solution. This agreement was in “Israel’s” favor from A to Z. Although, it entailed mutual recognition and the creation of the Palestinian state at the 1967 war borders which included the West Bank, Gaza Strip and East Jerusalem as its capital, several important issues like the right of return, borders, settlements, water, sea and airports will be decided at the end of the five year period. None of these articles were implemented. Furthermore, after 25 years of Oslo, the Palestinians are still living in a huge open prison as the Gaza Strip is under siege for 13 years, hundreds of thousands of dunums of Palestinian land are confiscated, dozens of Zionists colonies are erected, over 800 km of the illegal wall surrounding and cutting in between the Palestinian cities, towns and rural areas, water springs, power grids, land, sea, and airports all are under the control of the Zionist colonial entity.

The PLO executive committee and President Mahmoud Abbas have declared their decision to abandon the Oslo agreements, to suspend their diplomatic and security relations with the Americans and the Zionist leaders in rejection to the West Bank annexation plan. But this is not enough to confront the new wave of ethnic cleansing.

The Palestinian leadership needs to free its mind from any illusions that Americans and Zionists want peace and recognize reality that we are in the process of national liberation not state-building. For over 72 years, Zionists practiced apartheid policies against Palestinian people which is much worse than those practiced in South Africa and like those of Nazi Germany. Even the UN human rights experts announced their condemnation of the Zionists’ annexation plan of parts of the occupied West Bank, as a “vision of a 21st century apartheid”.

The new geopolitical order provides a positive environment to a genuine solution in front of the PLO and the Palestinian people; to restore the National Charter of 1968 and resolutions of the National Councils up to 1974 on the vision of comprehensive unity of an undivided, historic Palestine in terms of both land and people, to maintain a tight link between the objectives of the Palestinian National Movement and the Arab, regional and international resistance movements, to emphasize the leading role of the organization in liberating Palestine from settler colonization along with all national forces as a framework for their alliance during the liberation stage.