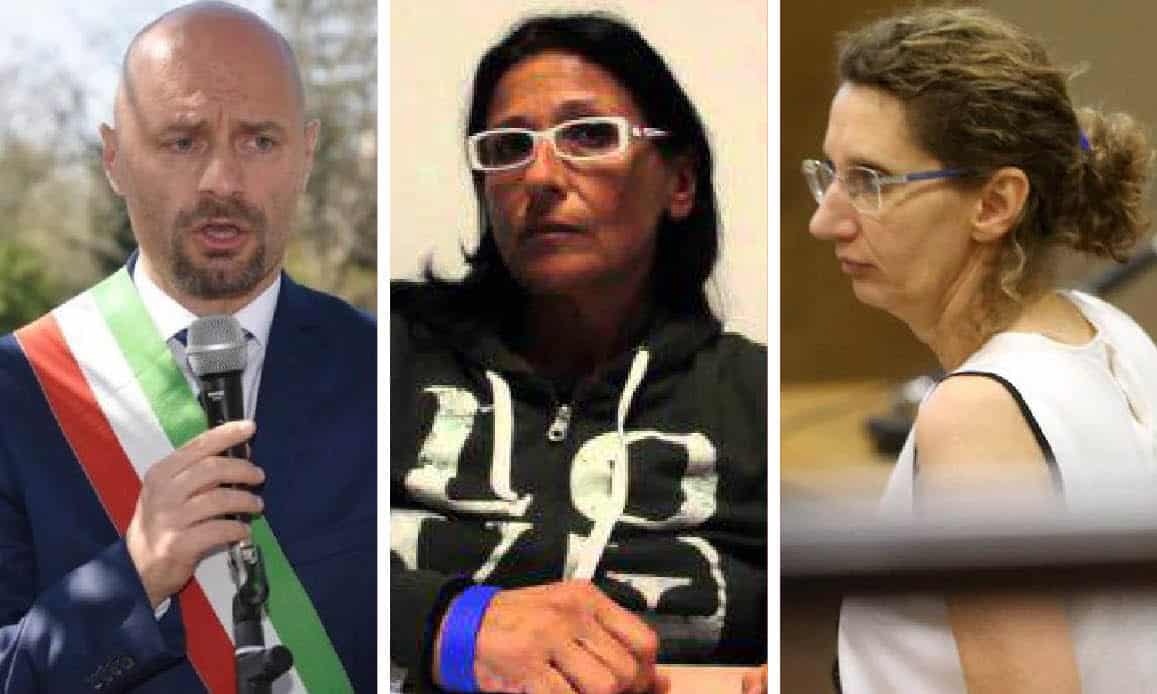 For the Court of Cassation there were not enough elements to put the Mayor of Bibbiano Alberto Carletti under house arrest, but for the Prosecutor of the Republic of Reggio Emilia there are enough to ask for his indictment for crimes of false and abuse of office.

On charge of the politician, meantime self-suspended by the Italian Democratic Party, the prosecutor Valentina Salvi has moved disputes of an administrative nature and not for issues directly related to the alleged illegal custody of minors, even to gay couples, around whom the chilling investigation called “Angels & Demons” revolves, on dozens of children snatched from the state, without reason, from natural families.

On 30 October there will be a preliminary hearing in the Tribunal of the Reggio Emilia for 24 people against whom the public prosecution has requested the indictment. For someone this is not a surprise. «They discovered the hot water» said the lawyer Francesco Miraglia del Foro in Rome who defends three families in the Val d’Enza (central Italy) to which children of only 3, 7 and 12 years had been unjustly removed.

«Since 2001 I have dealt with events of this kind and I can say that there are cases of “Angels and Demons” throughout Italy. I took the request for indictment for granted. I filed the first complaint in Reggio Emilia for illegitimate removals linked to Bibbiano in 2008. So what was discovered did not surprise me in the least» explains the lawyer of the offended parties ready to appear in the now almost inevitable trial..

«I can not help but urge each prosecutor’s office to take an example from the Emilian one because this round of money in poorly managed family houses, social services that do not work, inefficient Juvenile Courts are found in every part of Italy. The time must finally come when those who make mistakes pay: we must put an end to this “market” on children’s skin».

The lawyer Miraglia uses resolute and lapidary words towards the same judicial institutions. «The real responsible is always the Court. It is unacceptable that any judge has said that they are an injured party and that they have been misled by social services. A judge cannot claim that he does not have the ability to exercise his power in assessing the situation. The Tribunal cannot afford to make copy-paste with the reports of the social services and the CTU (technical advice from the office). The Court must ascertain the facts in every detail before making a decision and since we are talking about minors it must do so with even more competence, professionalism and preparation. When you decide on a child, you also decide on the whole family to which it belongs».

LAW BETWEEN MAGISTRATURE AND POLITICS

The case of the Mayor of Bibbiano caused concern for every facet of the story. It goes without saying, in fact, that an administrator suspected of alleged serious administrative crimes committed during his post as a public official, until the investigation is completed, should be kept away from the place where he would have committed the violations in order to avoid the risk of pollution of the evidence, as self-evidently claimed by the requesting magistrates and by the Preliminary Investigation Judge who issued the order for pre-trial detention on June 27, 2019.

But the red magistrates, for Ermellino’s dignity cloak that they wear in the Cassation in Rome, intervened in favor of the PD representative, replying what had already happened for the Mayor of Riace, then sent to trial for aiding illegal immigration. The reasons for the house arrest, already mitigated in the obligation of residence, were found to be unfounded, with a provision that allowed him to be reinstated by the Prefect at the head of the municipal administration of Bibbiano.

One cannot doubt in any way the good faith of astute and quibbling jurisperites. And it would be misleading to correlate these reiterated benevolent interpretations of the facts with the scandal of PalamaraGate only because of the intertwining between left robes and politicians of the PD.

For those “hot” messages, due to the stench of political conspiracies, intrigues and spies such as to induce early retirement from the former Prosecutor General of the Cassation, the Superior Council of the Judiciary, the institutional body of self-government in the category, has opened 20 investigations charged to as many magistrates who risk even being removed by the judiciary or an annoying transfer. But not an indictment at the moment (exception for two of them).

If a judge is very attached to a PD deputy and at dinner they discuss the appointment of the next vice-president of the Superior Council of the Judiciary what is wrong? As long as they are friends and sincerely love each other.

It does not matter if a member of the Democrats really, for the second time in 5 years, goes on to hold that position and obviously, always by pure chance, is the deputy of one of their party mates. The president of the CSM is by right the Head of State who since 2006 in Italy, by another curious coincidence, has been from the PD: from Giorgio Napolitano to his loyal Sergio Mattarella, both rightly experts in intelligence for their national and international assignments.

Having made this necessary premise, which already gives a glimpse of the first clouds on the horizons of a clear procedural evolution, let’s move on to the judicial news updates reported by Italian newspapers.

«The Prosecutor of Reggio Emilia has requested the indictment for 24 people in the context of the Angels and Demons investigation into the alleged illegal custody in Val d’Enza. 155 witnesses cited by the prosecution, 48 the offended parties, including the Union of Municipalities Val d’Enza, the Municipalities of Gattatico and Montecchio, the Ministry of Justice and the Emilia-Romagna Region» reported Il Fatto Quotidiano with abundance of details.

The investigation was conducted with extreme diligence and sensitivity, being children of even a few years old involved, by the Carabinieri of the Operational Department of Reggio Emilia and in particular by Lieutenant Colonel Emilio Bosini of the Investigation Unit under the command of Lieutenant Colonel Alessandro Dimichino before and Lieutenant Colonel Stefano Bove then, when the latter took office in September 2019 leaving the NATO Headquarters in Brussels.

«The closure of the investigation dates back to January 14, and the case had erupted on June 27, 2019 with the execution of 18 precautionary measures – the newspaper adds – The crimes contested in the investigation are, for various reasons, embezzlement of use, abuse of office, violence or threat to a public official, false expertise also through the deception of others, procedural fraud, misdirection, secret revelations in criminal proceedings, ideological falsehood in public deed, mistreatment in the family, private violence, very serious malicious injuries, aggravated fraud for the achievement of public funds».

Potential defendants include Federica Anghinolfi, former head of social services of the Val d’Enza Union, psychotherapist Nadia Bolognini and comrade Claudio Foti of the non-profit organization Hansel & Gretel. The first ended up in the media spotlight for being a known LGBT activist and for entrusting a female child to a couple of two homosexual women.

While the other woman and the self-styled psychologist (actually graduated only in Literature and Philosophy) have disconcerted Italian public opinion for having managed, at the expense of the National Health System, expensive therapeutic sessions with the children inducing them to confess alleged family violence, resulting then invented, through tremendous tools such as the bad wolf disguises used by Bolognini and the use of an almost diabolical tool used in US but forbidden in Italy above all with minors…

It was in fact the Preliminary Investigation Judge in the precautionary measures to report “false memories of sexual abuse engendered with the electrodes of that passed off to children as a souvenir machine”. It is the Neurotek, a device invented in the USA that transmits electromagnetic impulses to the child in order to solicit spontaneous revelations. The use of this machine is absolutely not contemplated in the Italian health system, let alone on children who are even more fragile and impressionable because they are torn from their parents.

American mother in Italy: “My daughter bombed with psychiatric drugs and forced to abort by Italian State”

At the preliminary hearing «Federica Anghinolfi will be able to fully exercise her right of defense. This will finally happen in front of a judge in court and not in the square or on the web, as unfortunately has happened so far », writes Rossella Ognibene, lawyer of the former head of social services of the Union of Val d’Enza Reggio, one of the key figures of the investigation “Angels and Demons” on foster care.

«In that session we will face, among other things and in the first analysis, all the anomalies of the accusations addressed to Dr. Anghinolfi. It will be a court to evaluate accusations and defenses and it will be the decision of a judge to establish the eventual indictment which, in the case, will give rise to a legitimate trial in the courtroom», continues the defense as reported by the newspaper Repubblica.

POLITICIANS’ REACTIONS AND THE LOST FILE IN OTHER TRIALS

The news sparked the comments of the center-right big names on the wave of the ‘Talk to us in Bibbiano’ campaign, the workhorse of the Northern League candidate for Emilia Romagna, Lucia Bergonzoni (then defeated in the regional elections anyway) as reported by the Italian Journalism Agency (AGI). read more…