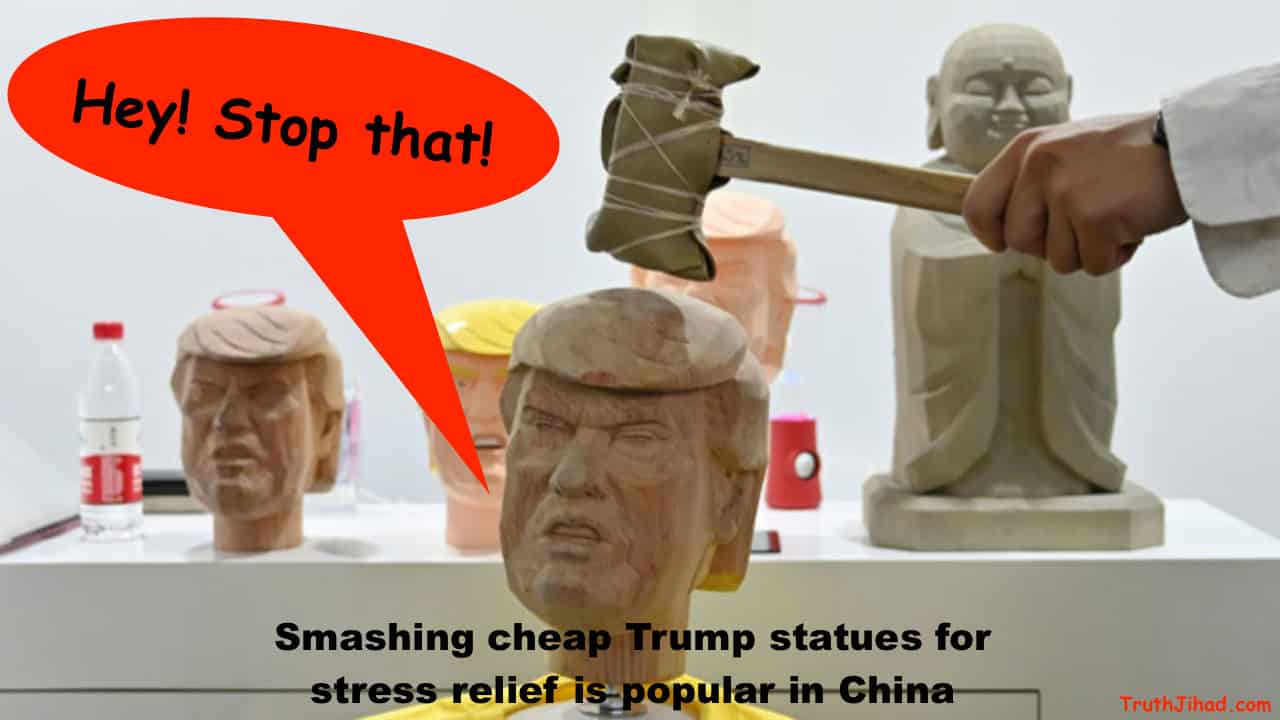 In March 2001, in the mountains northwest of Kabul, the Taliban blew up two colossal statues of Gautama Buddha. The act was almost universally condemned. But the Taliban’s justification of historic vandalism makes at least as much sense as those offered by today’s American Taliban, who are on a nationwide rampage of statue-destruction.

Here in Madison, Wisconsin, confused protesters just destroyed two statues honoring causes they presumably support. One honored Hans Christian Heg, “a Norwegian immigrant, activist and abolitionist who led an anti-slave catcher militia helping slaves escape before serving as a Colonel for the Union army in the Civil War. He was killed in the Battle of Chickamauga in north Georgia in 1863.” The other was Miss Forward, an American version of the French goddess of liberty Marianne, symbolizing progressive causes in general and women’s rights in particular.

Do the vandals hate anti-slavery martyrs, women’s rights, and progressive causes? Probably not—unless the hooligans were egged on by Pepe-the-Frog worshipping Proud Boys in black masks posing as Antifa…which, come to think of it, would be a prank of monumental proportions. But I’m not sure today’s obscurantist left-wing lunatics need pro-Confederacy infiltrators to trick them into doing stupid things. They seem quite capable of self-directed idiocy.

The current frenzy of iconoclasm pretends to be secular, not religious. But that is a specious distinction. Myths, rituals, contagious emotions, collective behaviors, articles of faith, criteria for in-group out-group distinctions—such are the components of religion, and “secular” people are by and large just as religious as “religious” people. They just don’t realize it until they have taken Religious Studies 101. And even then, they may need a couple of anthropology and social psychology courses before it really sinks in. Once they realize that their secular progressivist worldview is in fact a religion, not just “the way things are,” they face a choice: Double down, retreat into nihilism, or find a better religion. A good guide to this dilemma from a doubled-down secular-progressivist viewpoint is Ernst Gellner’s Postmodernism, Reason, and Religion. Gellner argues that anyone who fully faces the problem will likely either embrace postmodernist nihilism or Islam, but that the correct if least obvious choice is Gellner’s own scientistic spin on secularism.

The Taliban based its iconoclasm on Islamic scripture, which considers Abraham the first monotheist, and celebrates his courageous smashing of pagan idols, which nearly led to his execution as a heretic. (Abraham’s would-be executioners did their best to burn him alive, but God bestowed a miracle: The fire became cool and peaceful rather than fatal.) Late in the Prophet Muhammad’s career, after the practically bloodless conquest of pagan Mecca, the Last Prophet repeated Abraham’s act, smashing the idols that had defaced the world’s primordial sanctuary of the one and only God.

Islamic iconoclasm, like Christian and Jewish iconoclasm, must be viewed in the context of monotheism’s struggle with pagan communities whose central rites always involved making sacrifices—ultimately human sacrifices—to their small-g gods. Though some pagan communities gradually substituted animal sacrifices, the anthropological evidence strongly suggests that all pagan sacrifices were originally human sacrifices. During the period of the emergence of monotheism, it was normal, indeed normative and often religiously required, for parents to sacrifice their children by burning them to death inside a statue of a hungry pagan god. The rite survives today at Bohemian Grove, where the official story holds that children are only symbolically sacrificed to Moloch in the cremation-of-care ritual. Whistleblowers and conspiracy theorists, for their part, claim children are raped, abused, and sacrificed at the Grove in activities that make Jeffrey Epstein’s Mossad blackmail schemes look tame and wholesome by comparison.

Likewise, in pagan Mecca, female children were routinely sacrificed by being buried alive. Such killings were condoned by the gods who supposedly inhabited the pagan idols in the Kaaba, and who also received sacrifices there. Pagans believed that killing someone or something in front of a statue somehow nourished the god inside, who would reciprocally bestow worldly wealth, power, and/or pleasure upon the person performing the sacrifice. Today human sacrifice to these gods-with-a-small-g is still practiced, albeit covertly, in West Africa, North Africa, Latin America, and elsewhere, possibly including Bohemian Grove. (While doing Ph.D. research in Morocco I heard credible accounts of satanic sorcerers sacrificing children to deities in order to learn where treasure was buried; colleagues in African Studies said similar sacrifices are even more widespread and universally acknowledged in Ivory Coast and other West African nations; and one of my former University of Wisconsin colleagues, Neil Whitehead, died mysteriously after researching similar practices in Latin America.)

René Girard famously argued that universal monotheism, especially Christianity, tends to end such sacrificial rites by fostering identification with victims. Whether or not you think Girard was on to something—and I definitely do—it’s easy to see why so many monotheists, including Muslims, take a dim view of idolatry in general, and statue-worship in particular.

So the Taliban might explain their destruction of the Buddha statues as follows: “We believe the statue-worshippers of old were evil, benighted practitioners of a peculiar institution and evil custom, namely human sacrifice. Though we realize that most people of this era who revere Buddha statues do not practice human sacrifice, any more than Americans who revere Robert E. Lee statues practice slavery, we think it is important to eliminate remaining vestiges of pro-pagan symbolism. After all, pagan sacrifice continues today in both disguised and undisguised forms all over the world. By allowing idolatrous statues, we tacitly approve of these atrocities.”

Would the Taliban be right? The answer hinges on one’s degree of openness to, and tolerance of, viewpoints other than one’s own. Someone who accepts the Taliban’s condemnation of idolatry, without regard for other people’s perspectives, would agree that the destruction of the Buddha statues made perfect sense. On the other hand, those of us who see the world as an inherently pluralistic place, and who try to honor the Other’s worldview by entertaining it and giving it a chance and only suppressing it forcibly as an absolute last resort, must argue that the loss of historical, cultural, and artistic heritage entailed by the destruction of the Buddha statues outweighed the benefits of suppressing whatever vestigial idolatry still inhered in those colossal graven images.

The above also applies to the destruction of American statues by left-wing rioters. Their secular-progressivist faith, with its Manichean mythos of the Confederacy of Absolute Evil versus the Union of Victorious Good, demands that monuments to pure evil be abolished. Such fundamentalist fervor denies the legitimacy, nay the very existence, of viewpoints other than its own. That some might see the Civil War as primarily about the right of secession rather than slavery simply does not compute to people who unconsciously use their fervent if not hysterical emotions as a Procrustean bed on which reality itself may be stretched into the most self-serving shape. Likewise the idea that a statue can commemorate historical or cultural heritage, and itself constitute artistic heritage, rather than serving as nothing more than a focus of worship or veneration, seems as foreign to the American Taliban as to their Afghan equivalent.

Since 9/11, Americans have been indoctrinated into believing that Muslims tend to be intolerant fundamentalists. But if we compare the global Muslim community’s reaction to the destruction of the Buddha statues to Americans’ reaction to the current rampage by secular-progressivist vandals, Muslims win the tolerance battle hands down. Most Muslims worldwide opposed the Taliban’s act. Indeed, the Grand Sheikh of al-Azhar among other Muslim authorities pronounced against the vandalism, to no avail. Even Mullah Omar wavered, finally deciding to blow up the statues less out of religious fanaticism than as an explosive middle finger to the neo-imperialists who he felt were mistreating his country.

But in today’s America, where secular liberal progressivism is no longer a religion of tolerance, it is hard to find mainstream authorities clamoring for the protection of their own national heritage. Still less are they clamoring for free and fearless speech about these and other matters. We are living in strange times when a US president feels the need to issue an executive order demanding that laws against destroying pubic monuments be enforced, when the only mainstream television personality who agrees is a marginalized outlier, and when a perfectly reasonable article like this can only be published at a shadowbanned alternative website.