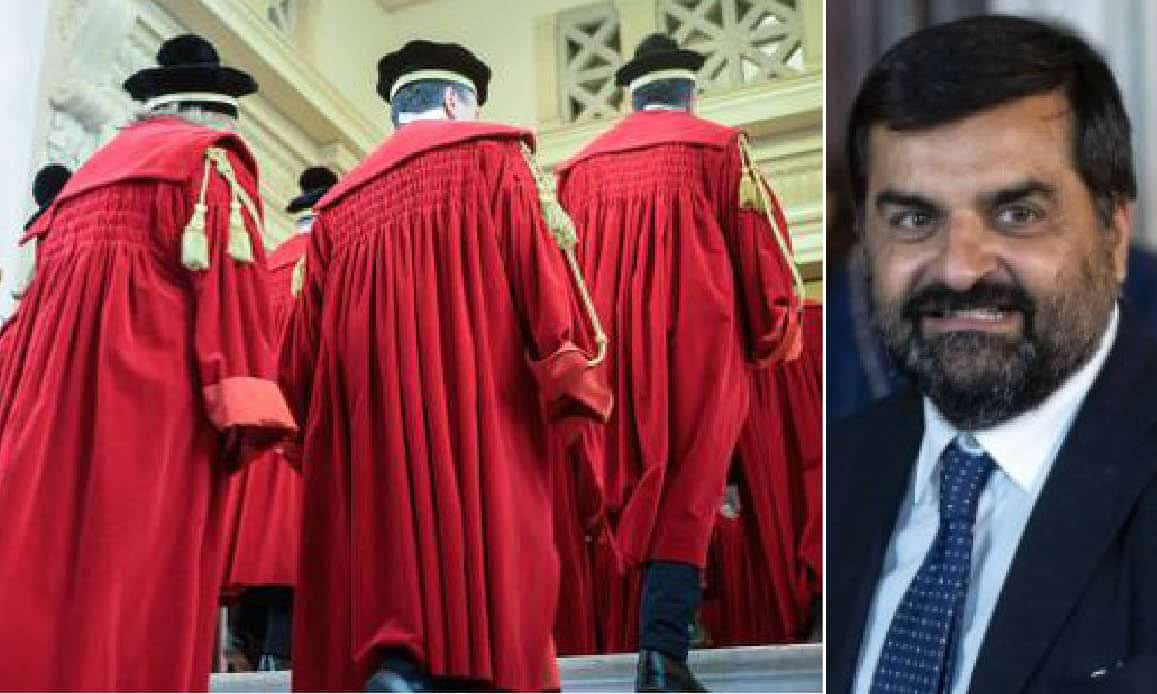 “Because He who is mighty has done great things for me,
and holy is His name;…
He has shown might with His arm,
He has scattered the proud in the conceit of their heart.
He has put down the mighty from their thrones,
and has exalted the lowly…”
Magnificat of Maria – Luke’s Gospel (1. 46-55)

Finally, the Court of Cassation points the finger at 10 magistrates highlighting their shady intrigues to guide the choice of the Rome Prosecutor destined to take up the burning CONSIP files in which is indicted also the former Minister of Sport Luca Lotti, an Italian deputy who suspended himself from the Democratic Party for this matter.

But the uncovered Pandora’s box has unveiled a “magic circle” drawn in the shadow of the Italian PD that also brings up streams of international weaves in the sign of the Italy-US Democrats already surfaced in Ukraine against the President Donald Trump, from which it arose the antithetical ObamaGate, together with those discovered by Gospa News in the triad promoting Big Pharma and vaccines between the former American President Barack Obama and his two great donors Bill Gates and George Soros.


Consip is the spa controlled by the Italian Ministry of Economy which manages the billionaire contracts for the public administration ended up in the eye of the hurricane for the arrest of a Neapolitan businessman accused of having paid bribes to some managers of the company itself.

Lotti, former minister of the Gentiloni government – should be clarified – he is accused only of aiding and secret office disclosure. It was precisely the summit among the red-wing sympathizers magistrates and the politician Lotti, former Undersecretary to the Prime Minister Matteo Renzi – of which he was a faithful right arm to the point of being co-investigated with his father Tiziano Renzi in the Consip case – to make them end up in serious trouble before the Superior Council of the Judiciary (CSM) so as to risk even the removal from the judiciary. Not enough, however, so far, to justify a criminal investigation.

Only the deputy Roman prosecutor Luca Palamara, already expelled from the trade union National Association of Magistrates and suspended from duties and salary, is in fact investigated for corruption in judicial documents and is considered the main engine of this “worm in the CSM”, as he defined it the former anti-mafia prosecutor and parliamentarian Giuseppe Ayala.

He is the only one of the 10 affected by a criminal investigation together with Luigi Spina, the alleged “spy” who, by virtue of his role as member of the same Superior Council of the Judiciary, revealed to Palamara the contents of the investigation launched by the Prosecutor of Perugia (competent on the crimes of the judges of the capital) against him.

Everything revolves around the wiretappings of burning chats between magistrates and politicians collected by the prosecutors of Perugia thanks to the Trojan inoculated by the GICO (Investigation Group Organized Crime) of the Guardia di Finanza from which the scandal we renamed PalamaraGate emerged in all its devastating scope.

Already the fragments of those recordings had reported that meeting on May 8, 2019 in which they tried to weave the plot to bring a “friend” to lead the Rome prosecutor’s office due to the retirement of the prosecutor Pignatone, a magistrate estimated by many from the category but in turn ended up at the center of other embarrassing interceptions that will be the subject of a dossier announced by Senator Maurizio Gasparri of Forza Italia, before receiving an anonymous letter with death threats.

Now it is the new Attorney General of the Cassation Giovanni Salvi (the previous Riccardo Fuzio asked for early retirement because he was involved in the scandal and investigated for having also made revelations of office secrets to his colleague Palamara) to provide all the details on ha “plot-ist” dinner at the Champagne hotel in Rome.

According to Repubblica Italian newspaper, AG Salvi says: «These are ten positions for which an audience was requested for the individual participants: Luca Palamara, and the former directors of the CSM Luigi Spina, Gianluigi Morlini, Corrado Cartoni, Paolo Criscuoli, Antonio Hare, for the speeches made that evening and therefore for the incorrect conduct towards colleagues who ran for the power of attorney in Piazzale Clodio. The interference in the exercise of the constitutional bodies was also contested, due to the offensive nature of the conduct carried out».

However, it is not known who the other 10 gowns, for a total of 20, against which the first Commission of the CSM, the one that dedicates on the para-disciplinary sanction of the transfer of office for “environmental incompatibility”, has initiated preliminary investigations.

As you know, the Superior Council of the Magistracy is the self-governing body of magistrates made up of togates and lay members with jurisprudential experience (lawyers) and political appointment. The CSM is the thin membrane between politics and the judiciary which allows the latter to be independent in view of the separation between legislative (Parliament), executive (Government) and judicial powers, enshrined in the Constitutional Charter.

But in this case the judges would have abused their autonomy to create a network capable of conspiring against other colleagues in intimate collusion with representatives of the Democrats, also intent on plotting against the political opponent Matteo Salvini, leader of the League, as emerged from other chats disconcerting.

3 – UNDER-SECRETARY OF 3 GOVERNMENTS IN THE MAGIC CIRCLE

In confirmation of this unhealthy intertwining of red robes and parliament, among the addressees of the investigation which could cost the expulsion (or transfer to another office) there is also «the Renzian (Matteo Renzi group – ed) deputy Cosimo Maria Ferri for whom the general prosecutor has asked the CSM to ask the Chamber for authorization to use its wiretaps» writes Repubblica.

Ferri is not just any member of parliament since he was Undersecretary of Justice in three leftist governments (Letta, Renzi and Gentiloni). An important ring appears in the so-called “magic circle” registered by PD, with which he was elected to the Chamber before joining as an independent member of the group of Italia Viva founded by Renzi which in the Senate is fundamental for the majority PD-5 Government Stars Conte Bis.

The reference is to the so-called political “magic lily” as the entoruage of the ex premier Renzi was defined by the flower symbol of Florence where he became President of the Province and Mayor before being indicated in 2014 by President Giorgio Napolitano as Prime Minister, but above all the powerful “magic circle” that emerged from the interrogations of the judges of Perugia in relation to the deputy Dem Giovanni Legnini who became vice-president of the CSM.

In this position in September 2018 he was replaced by his party companion David Ermini, deputy in charge of the Justice of the Democrats department, appointed after a split in the CSM council and another suspicious dinner that ended up in the media in the last days.

Indeed, it was spotlighted by Palamara himself in a interview with Repubblica during an outburst in which he denounces a general malpractice in the battles between the magistrate’s trade union currents of the and does not agree to pass as a scapegoat. (read more)