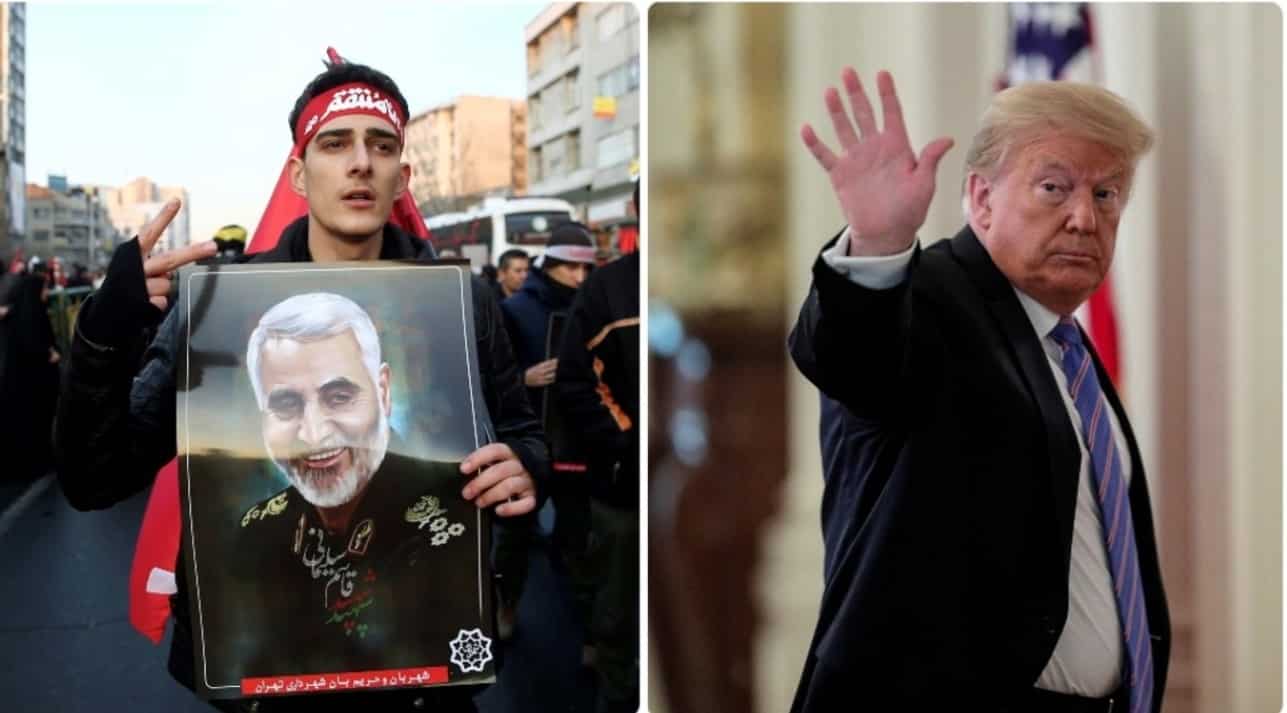 Veterans Today’s legal team has concluded that the Soleimani killing constitutes a war crime and that, as Donald Trump has openly bragged about ordering the murder, he should be detained, extradited and put on trial.

We don’t think Iran is the right place for a trial of this kind, and we don’t trust the brutal punishment of Saudi Arabia or Israel. Perhaps in Pakistan.

We ask the US Department of Justice to detain Donald Trump if, and only if, Interpol places a warrant on him, not otherwise. That has yet to occur.

[ Editor’s Note: No one saw this coming from Iran, including me. The US will of course say go to hell, but there is a string to pull here for Iran, with domestic precedent.

Former Washington, DC criminal prosecutor Glenn Kirschner has been leading the charge against not only Trump, but Attorney General Barr to both face investigation for potential criminal charges ‘in January’, assuming Trump does not win reelection.

His main theme for pursuing this action, leading the charge, is to “save the Republic”, to fix the huge damage that has been done via the aggressive politicization of the Justice Department and the courts.

Kirschner is not a gadfly, but a 30 year experienced criminal prosecutor who had never seen the political corruption of the current scale inside the Justice Department. He came out of the blue and now has 76,000 YouTube subscribers, and I suspect many from the current and past Justice Department people.

In the short video below, Kirschner recites a Trump Appellate Court case where DoJ attorneys were asked, “You’re not saying that if Donald Trump shot and killed somebody on 5th Ave that he could not be arrested and charged”, and they responded, “Yes your honor, we are.” I agree with Kirschner that such a DoJ concept is an outrage that needs to be dealt with as a security risk to the Republic.

There is not a shred of precedent for the DoJ’s above desire. They were pulling it out of their butts. I would pose to you, just because institutions claim they have the right to do things like assassinate a foreign diplomat using US military forces, purely by deciding themselves they are a terrorist, does not actually afford them that right.

It is past time we review, as in the politicization of the Trump DoJ, that a similar situation may have crept into our military command under the umbrella that the President’s orders cannot be challenged. And why, you might ask? Because it is a national security interest to all the rest of us.

A lot of American soldiers died unnecessarily due to the Soleimani group assassination. Iran’s responding was a foregone conclusion, and perfectly legal under international law.

In addition, our troops were sitting ducks with no adequate defense from a retaliatory missile attack. Their deaths, of course, are denied and only VT has spoken up for them. It gets lonely here sometimes … Jim W. Dean ]

RT/Moscow: Iran has identified 36 people involved in the US assassination of General Qassem Soleimani and will seek their arrest through Interpol channels, media reports said. The list of suspects is topped by President Donald Trump.

Iran has issued an arrest warrant for U.S. President Donald Trump and 35 others over the killing of General Qasem Soleimani, accused of terrorism and murder, they have contacted @INTERPOL_HQ for help arresting them. pic.twitter.com/WGFPO8PuwR

The names of the suspects in the high-profile murder of Iran’s elite Quds Force commander have been relayed to Interpol by Tehran’s chief prosecutor Ali Alghasi-Mehr, Iranian media said on Monday. The official called the killing a “murder” and a “terrorist act.”

President Donald Trump is at the top of the list, and his prosecution will be pursued even after his term is over.

Soleimani was killed on January 3 during a visit to Iraq, when his car was hit by a US airstrike. The Trump administration justified the attack, which also killed a prominent Iraqi commander and several other people, saying the Iranian general was plotting attacks on US soldiers.

BREAKING: Iran issues arrest warrants for Trump and 35 others in relation to Islamic Revolution Guard Corps commander Qasem Soleimani's death, the semi-official Fars news agency reports. The Tehran attorney general says Trump was at the top of the list. https://t.co/Sw404915WC

The popular general received a hero’s funeral in Iran, with millions taking to the streets on the days of the ceremony. Soleimani is credited with organizing and supporting Shiite militias, which fought against the terrorist group Islamic State (IS, formerly ISIS) in Iraq and Syria.

He was also considered to be a key figure in Tehran’s confrontation with US influence in the Middle East.

Iran has reportedly issued a warrant for Trump’s arrest on “murder and terrorism charges” related to the killing of top general Qassem Soleimani.

You can’t blame them for trying.https://t.co/JLmQNs0B9j

The assassination lead to a surge in hostility toward the US in Iraq. Its parliament even voted to have all foreign troops removed from Iraqi territory. The instruction is yet to be implemented by the Iraqi government, however.

Trump ordered the assassination of Soleimani amid a period of increased tension in Iraq. The situation escalated after several attacks on bases hosting US forces and those held by Iran-backed Iraqi militias in what appeared to be a cycle of tit-for-tat retaliations.

Days before the killing of Soleimani the US embassy in Baghdad was ransacked by a crowd of protesters, who stopped short of attacking the staff of the diplomatic mission.

#Iran's Judiciary has issued an #arrest #warrant for a total of 36 individuals (US & other Govts) involved in assassination of General #Soleimani & Interpol have been notified.

The Charges R murder & terrorist act & #Trump is at top of the list:

Sputnik News: Qasem Soleimani, commander of the Revolutionary Guards’ elite Quds Force and one of the most respected figures in Iran, was killed in a US drone strike in January during a goodwill visit to Iraq.

Authorities in Iran have approved a measure to ask Interpol to put US President Donald Trump on its international Red Notice of wanted persons over the assassination of General Qasem Soleimani, Iranian media including Mehr News and the Fars News Agency have reported, citing judicial officials.

“It was possible to identify 36 persons who participated in preparations for and were involved in the assassination of Qasem Soleimani, among them political and military figures from the United States and other countries,” Ali Alqasi-Mehr, Tehran’s prosecutor-general, said in a statement on Monday. “At the top of the list is US president Donald Trump,” he added.

According to the official, judicial authorities adopted a resolution to bring these persons to justice and to appeal to Interpol to issue red notices against them. If approved, Interpol would require law enforcement agencies in other countries to facilitate the search for and arrest of the requested suspects.

Iran’s charges against Trump and others include ‘murder’ and ‘terrorist acts’, charges which carry a maximum penalty of death under Iran’s criminal code. According to Alqasi-Mehr, Iran would pursue Trump’s prosecution even after the expiry of his term as president.

Later Monday, an Interpol spokesperson told Sputnik that the organization would not consider any Iranian request for President Trump’s arrest, citing agency rules. “In accordance with Article 3 of Interpol’s Constitution, ‘it is strictly forbidden for the Organization to undertake any intervention or activities of a political, military, religious or racial character.’ Therefore, if and when such requests are sent to the general secretariat…Interpol will not consider requests of this kind,” the spokesperson said.

US Assassination of Senior Foreign Leader

Soleimani was assassinated in a US drone strike in Baghdad, Iraq on January 3 during a goodwill trip to try to normalize Iran’s relations with regional adversary Saudi Arabia. His death prompted Iran to launch missile strikes on two US bases in Iraq, although Tehran warned its Iraqi allies of the strikes ahead of time.

Nevertheless, despite causing no fatalities, the strikes resulted in over 100 US servicemen and women reporting traumatic brain injuries. In late January, a Business Insider Poll found that one in four Americans believed Trump should be tried for war crimes by the International Criminal Court over Soleimani’s killing. Meanwhile, as many as 55 percent of Americans said they believed Soleimani’s assassination made their country ‘less safe’.