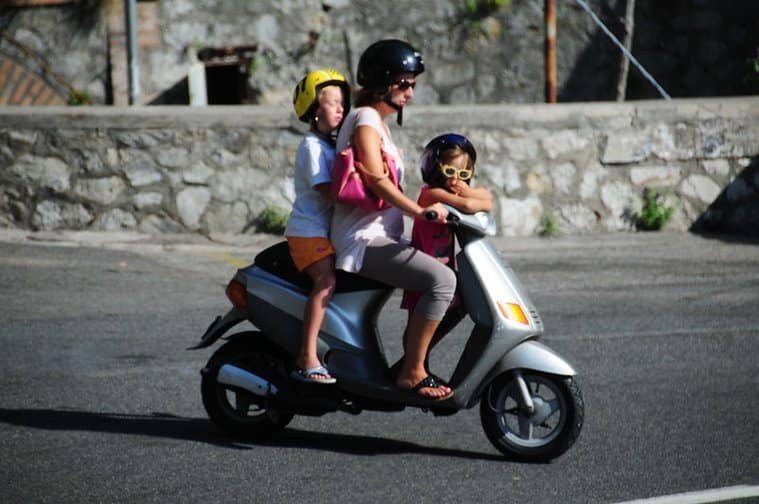 “Nobody at my husband’s company asked him how he was going to take care of his kids during the lockdown. It was obvious that their mother would.”

Italy inches closer to a new normality after a two-month strict lockdown imposed to stem the spread of the Coronavirus, clear provisions on school reopening and childcare have been lagging behind. For many women, this means having to sacrifice their professional lives to childcare.

Last April, in the middle of Italy’s lockdown, the hashtag #noncisiamo (literally “we are not there”, but it can also mean “it’s not ok”) started circulating on Italian social media to raise awareness of the fact that the government had close to no plan about the millions of pupils and students who’d suddenly found themselves out of school. Francesca Fiore and Sarah Malnerich, two women’s rights activists, built on the hashtag from their highly popular, irony-filled blog Mammadimerda, or “Shitty Mom”, which sets out to dismantle gender-based prejudice and to give a realistic view of the issues that mothers face day to day.

To them, it was clear that the consequences of the government’s lack of attention to these issues would inevitably burden women more than men, given that Italian women are more likely than men to already be under-employed and earn significantly less on average.

This seems to be the case.

“Women started writing to us, they were desperate because there was no plan B for the kids,” Francesca Fiore told me. For many, even after the relaxation of the government-mandated lockdown last month, a return to their previous lives feels far off.

Pia Di Giovanna, a 32-year-old HR specialist and mother of two from Novara, in the Piedmont region, said she was laid off from her job at the start of the lockdown. She has been juggling childcare and an extenuating job search, while her husband, an engineer, worked full-time from home. The government’s failure to reopen schools at the end of the lockdown and its scattered decision-making about reopening in the fall took a toll on Di Giovanna, who feels that her prospects of finding a new job falter as more months out of work go by.

“As long as we are in such uncertainty around schools and children, I feel that job-seeking moms will never find a job, ever,” said Di Giovanna. “Companies just aren’t going to invest in a woman who is going to have issues because of her kids.”

Having been out of work for three months already, she is now pondering very carefully whether to send her younger child, who is four, to the newly reopened summer camp. “It would cost 1000 Euros a month, excluding meals,” she said. The other option is for the kids to just stay home with her or to spend the occasional afternoon with their grandma.

Di Giovanna feels that this system is designed to leave women behind.

“In this emergency phase, disparities [between men and women] are very visible, they literally scream,” she said. “I feel abandoned as a mother, as a woman and as a worker. Nobody at my husband’s company asked him how he was going to take care of his kids during the lockdown. It was obvious that their mother would.”

Di Giovanna joined the social media campaign started by Mammadimerda in the hope that the plea of women like her would somehow reach the ministries for Education and Family affairs. While the ministries didn’t respond to the petition directly, an agreement was reached to reopen summer activities starting June 15.

Though the Ministry for Education recently came up with a reopening date of September 14 – by which schools will need to come up with plans to keep a one-meter distance between students – many feel that this is too little too late.
Out of work

The Italian National Statistics Institute reported in April that inactivity among women is on the increase – meaning that the number of women who didn’t have a job and stopped looking for one spiked during the pandemic. Unemployment went up among both men and women, but against an already unbalanced backdrop – 67 percent of Italian men are normally employed, but only roughly 49 percent of women are. In southern Italy, as few as 33 percent of women are reported to be in stable employment. The EU female employment average, on the other hand, is around 67 percent.

While female unemployment is an oft-cited element in analyses of Italy’s gender imbalance, some experts point out that the other big issue is the prevalence of women in low-paying, temporary positions.

During the pandemic, those positions were often the first ones to be taken off companies’ payrolls, especially when the jobs required a physical presence made impossible by social distancing measures.

“Women who have jobs that cannot be done from home are a lot more likely to be in the lowest salary tier than their male counterparts,” Maria Enrica Virgillito, assistant professor of Economics at the Sant’Anna high studies school in Pisa, told me.

To Virgillito, Italy’s problem with women’s inclusion in the workforce is an issue that builds on the prevalence of unfavorable, temporary contracts and on an endemic lack of investment in childcare. Even the funds that were allocated to families as part of the government’s Corona and post-Corona strategies could have been allocated differently, critics say.

“The policies that were put in place definitely do not target the most vulnerable individuals,” she said, referring to the one-time payments for baby-sitters that families can get and which are widely considered insufficient.

Until last week, families where a parent had requested paid family leave during the pandemic couldn’t access cash bonuses to hire babysitters, and furloughed workers couldn’t access them either, based on the idea that being out of work will give parents enough time to care for their children.

Though this has changed now, a poll conducted by Ipsos with the Italian nonprofit WeWorld found that one in two Italian women during the pandemic had to give up personal and professional projects in order to take on care work. And according to WeWorld this situation isn’t going to be eased as long as educational services are shuttered or partly shuttered.

The Italian labor inspectorate reported on Wednesday that over 37,000 new mothers left their job over the past year, citing difficulties in reconciling work and childcare.
The vexed issue of reopening schools

While most European countries that were hit by the Coronavirus pandemic drew up plans to reopen schools and daycares, with 22 countries now offering educational services, the Italian government has been taking its time. Education minister Lucia Azzolina, of the Five Star Movement, assured Italians many times that reopening schools safely was her first priority. Her office published preliminary reopening guidelines only a week ago, prompting dissatisfied reactions from trade unions and teachers.

Manuela Calza, spokeswoman for the FLCGIL school trade union, said that she is still under the impression that the Education Ministry doesn’t have a sufficiently concrete plan for reopening.

“We ask for all teachers to be equipped with all the possible systems that the health authorities will deem necessary, that these systems be free and that social distancing is maintained,” said Calza. “We also ask for the possibility of obtaining leave for at-risk individuals. We trust the health authorities with this, but politics should invest in resources, and at the moment I don’t see any commitment in this direction from the education ministry,” she added, saying that most teachers are looking forward to being back in class after months of remote schooling.

Martina Carrara, a mother of two from a rural area between Emilia Romagna and Tuscany, said she is very worried of what might happen to her career if school reopenings are delayed further. A seasonal freelance worker, Carrara usually splits her year between a job at a ski station in the winter and a catering one in the summer. She has been out of work since the start of the pandemic. Her husband is an ambulance driver and couldn’t take any time off for weeks on end, she said.

“I would say, let’s wait a month and see what happens, but I imagine that we might be back in [the pandemic] in October,” said Carrara. “At that point, I will probably be out of work for good.”

“Even if I hired a babysitter to be with the kids, how much would I have to pay for that if subsidies stop? Earning 800 Euros and paying 600 to a babysitter…I would rather stay home myself and that would be it,” said Carrara.

Last Thursday, a demonstration organized by different grassroots groups took place across Italy to demand in-person school reopening and to protest against proposed measures like a reduced timetable. As a result, the education ministry has promised an additional billion euros to be invested in schools ahead of the reopening, and has now proffered a tentative reopening date for September 14.

Pediatrics associations have been critical of the government’s slow response in reopening the education sector after the pandemic and have been warning that any decision shouldn’t build on fear that children could accelerate the spread of the virus. Giorgio Tamburlini, a pediatrician, president of Trieste-based Center for Children’s Health and advisor to the WHO, said that children under 12 years are unlikely to get infected and infect others.

“While closures were justified at the beginning because we didn’t know much about the virus and its spreading, it would’ve been good to speed up the reopening of educational spaces as our knowledge increased,” Tamburlini told me in an email. “That would have prevented the great damage to learning that occurred, especially in those children who already had difficulties or whose families didn’t have access to technology,” he said.