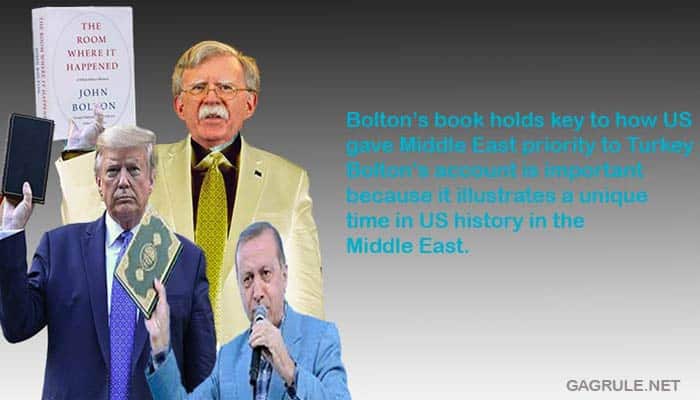 John Bolton, Pres. Trump’s former National Security Adviser, published a fascinating book on his work at the White House from April 2018 to September 2019. His revealing book, “The Room Where it Happened: A White House Memoir,” shows why Pres. Trump is unfit for office and incompetent. Bolton emphasized repeatedly that everything Trump did was either to secure his reelection or for his own self-interest, contrary to the interests of the country.

Today we will focus solely on Trump’s unholy relationship with the dictator of Turkey, Pres. Recep Tayyip Erdogan, whom Pres. Trump calls “The Sultan.” Turkey is mentioned 135 times in Bolton’s 570-page book. Erdogan is mentioned 95 times. This shows the importance the White House places on Turkey and Erdogan, Pres. Trump’s “close friend.” Surprisingly, neither Armenia nor Azerbaijan is mentioned in the book even though Bolton made a trip to both countries during his tenure.

In “The Room Where It Happened,” Bolton compares Erdogan’s tone on a phone call with Trump to “Mussolini speaking from his Rome balcony,” describing the Turkish leader as a “radical Islamicist.”

Erdogan, during his multiple visits to the White House and 20 phone calls with Pres. Trump, repeatedly raised the following three priority demands from Trump

1) The release of Turkish businessman Reza Zarrab from arrest in the United States by appealing to Pres. Trump to drop the charges against him. Zarrab, with Erdogan’s blessing, had laundered $20 billion to Iran through the Turkish government-owned Halkbank to circumvent the U.S. sanctions on Iran;

2) The extradition from the United States to Turkey of Fethullah Gulen, the Turkish cleric, who after his close alliance with Erdogan, split with him and became the Turkish President’s enemy number one. Erdogan falsely accused Gulen of leading the Turkish coup attempt in 2016.

3) The acquiescence of Trump to withdraw US troops from Northern Syria, allowing Turkey to invade that area and eliminate the Kurdish population’s presence inside the Syrian border.

Bolton related in his book that during the G20 summit meeting in Argentina on Dec. 1, 2018, Erdogan gave Trump a memo requesting that Zarrab be freed from U.S. jail. According to Bolton’s book, Trump told Erdogan that “he would take care of things, explaining that the Southern District [of New York] prosecutors were not his people, but were Obama people, a problem that would be fixed when they were replaced by his people.”

When Bolton was dispatched to Turkey to warn Erdogan that he should not invade Northern Syria, Bolton received a last minute phone call from Pres. Trump asking him to refrain from telling the Turkish President that the U.S. troops will not withdraw from Northern Syria, even though most of the White House senior staff disagreed with the President’s decision.

David Ignatius published an article in the Washington Post last week, titled, “Trump’s corrupt dealings with Turkey are some of the most startling stories in Bolton’s book.” Bolton recalls that he told Attorney General William P. Barr in April 2019 that Trump’s repeated efforts to help Erdogan showed his “penchant to, in effect, give personal favors to dictators he liked.” Ignatius described Trump’s corrupt dealings with Erdogan as “the clearest, most continuous narrative of misconduct by Trump that has yet surfaced.”

Ignatius linked the Trump-Erdogan friendship to Trump’s “personal business interests. When he launched Trump Towers Istanbul in April 2012, his daughter Ivanka Trump tweeted thanks to Erdogan, the prime minister at the time, for attending. With them was a Turkish businessman named Mehmet Ali Yalcindag, whom Donald Trump described at the opening as a “great friend” of Ivanka. Kushner, her husband, was there, too.”

Trump was surrounded by a group of pro-Turkish staff, such as his first National Security Adviser Michael Flynn who was forced to register as a foreign agent after it was revealed that Flynn’s consulting firm was paid $500,000 from a Turkish businessman who headed the state-run Turkish business federation. Flynn’s task was to get Gulen extradited to Turkey.

Another pro-Turkish adviser was Rudolph W. Giuliani, Trump’s personal lawyer, who contacted then U.S. Attorney Preet Bharara on Feb. 24, 2017, stating that he was traveling to Ankara as the representative of Zarrab. Giuliani pressured the Justice Department for “some agreement between the United States and Turkey” for the release of Zarrab, according to Guliani’s statement filed in federal court. Trump fired Bharara in March 2017, but the case against Zarrab was continued by the new U.S. Attorney, Geoffrey Berman, who was also fired by Trump last week.

Not surprisingly, Erdogan was angered by Bolton’s revelations. Fahrettin Altun, the Turkish presidency’s communications director, said on Twitter: “Recent publication of a book authored by a high-level former U.S. official includes misleading, one-sided and manipulative presentations of our leader President Erdogan’s conversations with the US President Donald Trump.”

Unfortunately, Bolton refused to testify in Congress during Pres. Trump’s Congressional Impeachment Hearings, even though it would not have made a difference. Just about all Republican Senators blindly follow Trump’s lead no matter how wrong he is. As Trump arrogantly proclaimed during the campaign, “I could stand in the middle of 5th Ave. and shoot somebody and I wouldn’t lose any voters.”