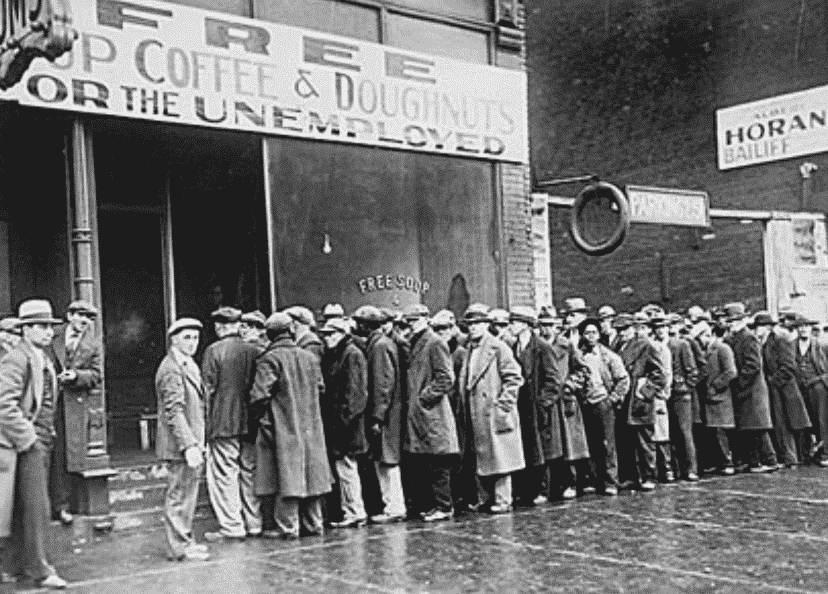 There is a lot of talk about the “unemployment rate” these days, but the way that it is calculated has become so convoluted that it is not really that meaningful anymore. Even during the so-called “good times”, more than 100 million U.S. adults were not working, but we were told that the unemployment rate was the lowest that it had been in decades.

Of course now everything has changed. Since this pandemic began, more than 47 million Americans have filed new claims for unemployment benefits, and the mainstream media is going to make sure that fear of COVID-19 continues to paralyze our society for the foreseeable future.

Nearly half of the population is still out of a job showing just how far the U.S. labor market has to heal in the wake of the coronavirus.

The employment-population ratio — the number of employed people as a percentage of the U.S. adult population — plunged to 52.8% in May, meaning 47.2% of Americans are jobless, according to Bureau of Labor Statistics. As the coronavirus-induced shutdowns tore through the labor market, the share of population employed dropped sharply from a recent high of 61.2% in January, farther away from a post-war record of 64.7% in 2000.

As you can see on this chart, we are definitely in unchartered territory.

We have never seen a collapse of this magnitude in all of U.S. history, and it has been truly horrifying to watch so many people lose their jobs.

It would be difficult to overstate just how far we have fallen. One analyst has pointed out that it would take 30 million new jobs for the employment-population ratio to return to the peak that we witnessed all the way back in 2000…

“To get the employment-to-population ratio back to where it was at its peak in 2000 we need to create 30 million jobs,” Torsten Slok, Deutsche Bank’s chief economist, said in an email.

Of course before we can start adding jobs we have got to stop the bleeding first, and at this point more than a million Americans continue to file new claims for unemployment benefits each and every week.

And more job losses are coming, because companies are shutting down at a staggering rate. In fact, this week USA Today warned that “experts believe this is just the beginning of a bankruptcy tsunami that will wash over the country’s largest companies this summer”…

Twelve midsize to large corporations – all with more than $10 million in debt – filed for Chapter 11 bankruptcy protection during the third week of June, another consequence of the coronavirus pandemic and continued trouble in America’s oil industry.

The filings represent the highest weekly total of the year, and experts believe this is just the beginning of a bankruptcy tsunami that will wash over the country’s largest companies this summer and then drench both smaller businesses and individuals if government stimulus money dries up.

Those two paragraphs almost sound like something that I could have written.

But at this point it is very difficult for anyone to deny how bad things have become. So many firms are suddenly going bankrupt that it is impossible to keep up with them all, and the energy industry is being hit particularly hard…

At least 24 oil and gas companies filed from April through June – nearly twice as many as during the first three months of the year, according to Haynes and Boone LLP, an international law firm based in Texas. Four of those companies – Texas-based NorthEast Gas Generation, Colorado-based Extraction Oil & Gas, and Chisolm Oil and Gas and Chesapeake Energy, which are both from Oklahoma – filed in the last two weeks of June.

“This trend should continue through the remainder of 2020 and into 2021,” said Charles Beckham, a partner in Haynes and Boone’s restructuring practice.

Of course it isn’t just the U.S. that is experiencing severe economic pain.

COVID-19 has paralyzed economies all over the planet, and global trade has dropped precipitously…

World trade in goods plunged by 12% in April from March, after having already dropped 2.4% in March from February. This plunge of the Merchandise World Trade Monitor, released by CPB Netherlands Bureau for Economic Policy Analysis, was by far the largest month-to-month drop in the history of the data going back to 2000.

For such a long time, many were warning that “the next global depression” was coming, and now it is here.

Many of the economic optimists had been hoping for a very short downturn followed by a “V-shaped recovery”, but now it has become clear that is simply not going to happen.

The primary factor dragging our economy down is fear of COVID-19, and the mainstream media continues to add to that fear day after day.

Over the past couple of weeks, we have seen a surge of new cases in some portions of the U.S., and this has caused quite a few states to put a hold on their reopening plans…

At least 14 states have paused or rolled back their reopening plans as the United States sees a surge in coronavirus cases across the country.

With July 4 celebrations approaching, officials are trying not to repeat scenes from Memorial Day, when thousands flocked to beaches, bars and parties while experts cautioned that crowds could lead to spikes in cases down the road.

I wish that I could tell you that things will soon get much better for the U.S. economy, but I can’t.

Yes, there will be ups and downs during the months ahead, but a return to “normal” is certainly not in the cards.

So I would definitely encourage everyone to use this window of opportunity to get prepared for rough times ahead, because we are about to see things happen that we have never seen before.

About the Author: I am a voice crying out for change in a society that generally seems content to stay asleep. My name is Michael Snyder and I am the publisher of The Economic Collapse Blog, End Of The American Dream and The Most Important News, and the articles that I publish on those sites are republished on dozens of other prominent websites all over the globe. I have written four books that are available on Amazon.com including The Beginning Of The End, Get Prepared Now, and Living A Life That Really Matters. (#CommissionsEarned) By purchasing those books you help to support my work. I always freely and happily allow others to republish my articles on their own websites, but due to government regulations I need those that republish my articles to include this “About the Author” section with each article. In order to comply with those government regulations, I need to tell you that the controversial opinions in this article are mine alone and do not necessarily reflect the views of the websites where my work is republished. The material contained in this article is for general information purposes only, and readers should consult licensed professionals before making any legal, business, financial or health decisions. Those responding to this article by making comments are solely responsible for their viewpoints, and those viewpoints do not necessarily represent the viewpoints of Michael Snyder or the operators of the websites where my work is republished. I encourage you to follow me on social media on Facebook and Twitter, and any way that you can share these articles with others is a great help.  During these very challenging times, people will need hope more than ever before, and it is our goal to share the gospel of Jesus Christ with as many people as we possibly can.