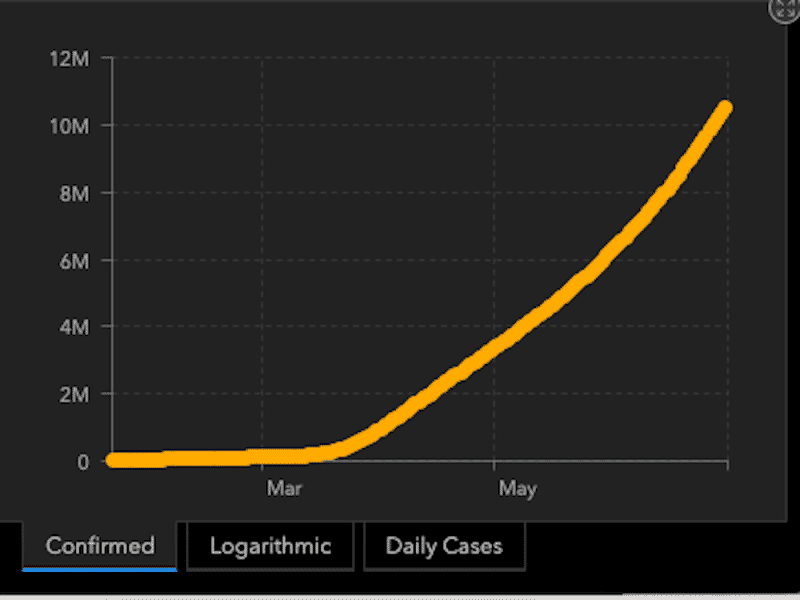 New daily coronavirus cases in the United States soared past 50,000 for the first time Wednesday, as the World Health Organization delivered a grave warning that the global pandemic is accelerating.

Restaurants, bars and beaches in the world’s worst-hit nation closed from California to Florida, as states reeling from yet another surge in the deadly virus braced for Independence Day festivities.

Global infections have hit their highest level in the past week, WHO data showed, with chief Tedros Adhanom Ghebreyesus saying new cases topped “160,000 on every single day.”

The grim milestone came as the European Union left the United States, Brazil and Russia off its final list of nations safe enough to allow residents to enter its borders.
AT Premium 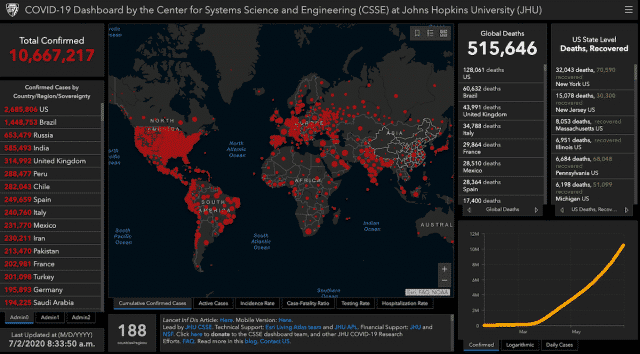 Click on the link at the top to see a live version of virus information. Johns Hopkins Center for Systems Science and Engineering produced this website, which displays statistics about deaths and confirmed cases of the coronavirus, or Covid-19. Image: Johns Hopkins

With more than 52,000 new Covid-19 cases in the United States alone in the past 24 hours, according to a Johns Hopkins University tally, several US states imposed 14-day quarantines on visitors in the buildup to the long weekend’s July 4 celebrations.

California suspended indoor dining at restaurants in Los Angeles and several counties, while New York scrapped plans to allow restaurants to seat customers inside from next week.

President Donald Trump reiterated his belief that the contagion will “at some point … sort of just disappear, I hope.”

But the US leader who has yet to be seen in public wearing a face mask during the pandemic added he would have “no problem” doing so.
EU travel ban eased

The rollbacks came as the European Union reopened its borders to visitors from 15 countries.

The bloc hopes relaxing restrictions on countries from Algeria to Uruguay will breathe life into its tourism sector, choked by a ban on non-essential travel since mid-March.

Travelers from China, where the virus first emerged late last year, will be allowed to enter the EU only if Beijing reciprocates.

And Brazil – which has suffered the most deaths globally for the last week, and is the second-worst affected country overall – was excluded entirely.

However, with more than 10 million known infections worldwide and more than 500,000 deaths, the pandemic is “not even close to being over,” the WHO warned.

Data provided by the UN health agency for the seven days from June 25-July 1 showed the highest number of new daily cases ever recorded came on June 28, when more than 189,500 new cases were registered worldwide.
‘Dutch brothels reopen’

According to the United Nations, the coronavirus crisis could cost global tourism and related sectors from $1.2 to $3.3 trillion in lost revenue.

Greece, which has suffered fewer than 200 virus deaths, has seen its economy hit hard by lockdowns and travel restrictions, all but ending its lucrative tourism season before it began.

Romanian Cojan Dragos was “the first tourist” in one Corfu hotel after driving there with his wife and daughter.

“We have the whole hotel just for us,” he said.

Separately, Spain and Portugal held a ceremony as they reopened their land border.

The Netherlands also confirmed the reopening Wednesday of another tourist draw – its brothels and red-light districts.

“I’m totally booked,” said sex worker Foxxy, adding that she had held a “little party” when she heard restrictions would be lifted.

Russia did not make the EU’s list of approved countries, so its citizens will be absent from the bloc’s tourist hot-spots.

The country, however, enjoyed a public holiday Wednesday as it voted in a referendum to approve constitutional changes allowing President Vladimir Putin to stay in power for another 16 years.

Putin was forced to postpone the vote in April as his government tackled an outbreak that has infected almost 650,000 people, the third-highest in the world.

In other countries, clusters are still causing problems.

The Palestinian Authority announced a five-day lockdown across the West Bank after a surge in confirmed cases.

And textile factories in the central British city of Leicester were suggested as the reason for a spike in infections that has prompted the reimposition of local restrictions.
Americas spike

In the United States, spikes across southern and western states are driving a surge in national infections.

Texas, which again smashed its daily Covid-19 record with more than 8,000 new cases, joined Florida and California in closing some beaches for the upcoming holiday weekend.

Apple announced it would close another 30 US stores on Thursday, half of them in California.

The Pan American Health Organization warned that the death toll in Latin America and the Caribbean could quadruple to more than 400,000 by October without stricter public health measures.

The US government announced this week it had bought 92% of all remdesivir production – the first drug to be shown to be relatively effective in treating Covid-19.

Britain and Germany, however, said Wednesday they had sufficient stocks of the drug.
‘Corona baby’

In Britain, some 1,500 acts from Ed Sheeran and Coldplay to Paul McCartney and The Rolling Stones urged the county’s government to save the live music industry, which has been collapsing because of the coronavirus.

But while lockdown measures have been a disaster for many, some have welcomed the chance to spend more quality time with hard-working partners.