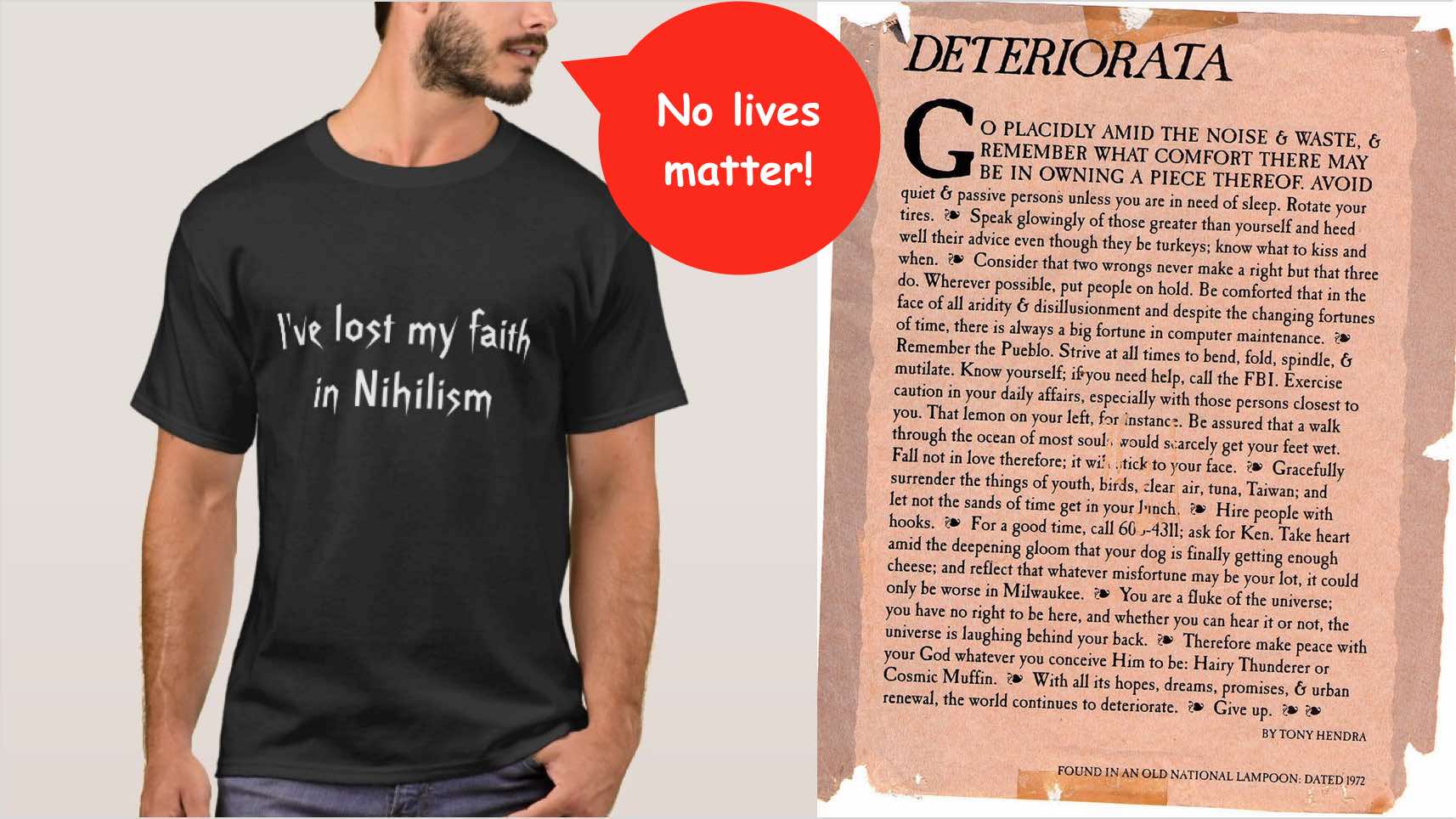 “I was wrong, so terribly, awfully wrong,” Dudwhump sobs in the video. “What ever could have made me tweet ‘all lives matter?’ That is a horrific, insensitive thing to say. And what’s more, it is obviously not true. The truth, of course, is that ‘no lives matter.’ We are mere specks of animated mud, crawling like microscopic insects across the face of slightly-better-than-average but rapidly deteriorating planet in a garden-variety solar system two-thirds of the way out a random and not particularly distinguished arm of a fairly typical galaxy amidst the hundred billion or so that have thus far been detected. To think that the lives of any one of the more than seven billion humans infesting this minuscule, insignificant planet called Earth really matter would be a grossly intolerable and deeply offensive conceit. Nobody who thinks that any lives matter deserves to be employed in today’s secular materialist academy, which holds that humans, and indeed life itself, are simply cosmic accidents, accretions of random mutations with no inherent value whatsoever. Claiming that all lives matter—all seven billion human lives—is as absurd as claiming that all grains of sand on all the oceans’ beaches matter, or that all the ants in all of the earth’s anthills matter, or that all of the atoms of stardust in all the Milky Way’s stars matters. The fact is, in the cosmic scheme of things, a single human life is nothing! Nada! Zilch! Waloo! And quite frankly, since my own life doesn’t matter, and nor does anyone else’s, I can’t imagine why anyone should care whether I choose to make an absurdly specious claim like ‘all lives matter,’ or recant it by admitting the truth, which is that obviously no lives matter, nor does anything else when you really get down to it.

“But I do understand why I was fired. Claiming that anything whatsoever matters, or that human lives are somehow more than just randomness acting on dead matter in space-time, is damnable heresy to the secular materialists who run the academy. So it was only natural that they ran me out of town on a proverbial rail. And it will be equally natural when they re-hire me after I confess my sin and swear on a leather-bound copy of Darwin’s Origin of Species that never again will I hold that anything or anyone matters in the slightest.”

The University issued a statement accepting Duddwhump’s apology, adding that since Duddwhump and his offensive statement didn’t matter at all in the cosmic scheme of things, nor did balancing the University budget, the professor would be reinstated and his salary raised a hundredfold.