POliticsUSA: Grassroots groups will be running a full-page ad in Pennsylvania featuring 6,000 vets agreeing with Gen. Mattis and denouncing Trump. 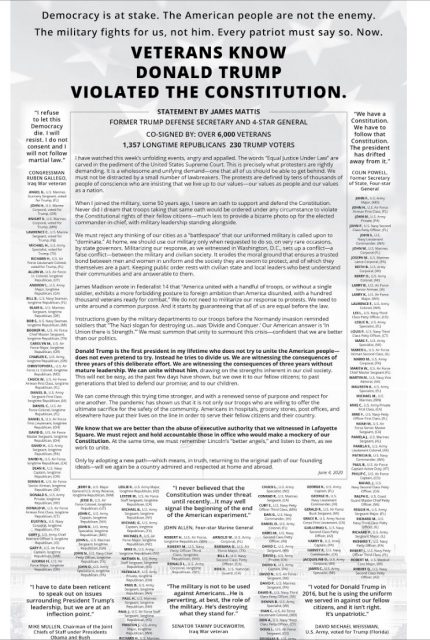 According to a statement from the Progressive Change Campaign Committee provided to PoliticusUSA:

This Fourth of July weekend, grassroots groups will run a full-page ad featuring 6,000 veterans who agree with former Trump Defense Secretary James Mattis that we must “hold accountable” President Donald Trump for making “a mockery of our Constitution.”

The ad, run by veterans organization Common Defense and the Progressive Change Campaign Committee, will run first in the Harrisburg Patriot-News in Pennsylvania — the state where American democracy was born and the first Constitutional Convention was held.

“Donald Trump is the first president in my lifetime who does not try to unite the American people,” said Mattis, a 4-star Marine general who Trump appointed to lead America’s military. “We are witnessing the consequences of three years without mature leadership…We must reject and hold accountable those in office who would make a mockery of our Constitution.”

“I voted for Donald Trump in 2016, but he is using the uniform we served in against our fellow citizens, and it isn’t right. It’s unpatriotic,” said David Michael Weissman, an Army veteran from Florida who co-signed Mattis’s statement and is quoted in the ad.