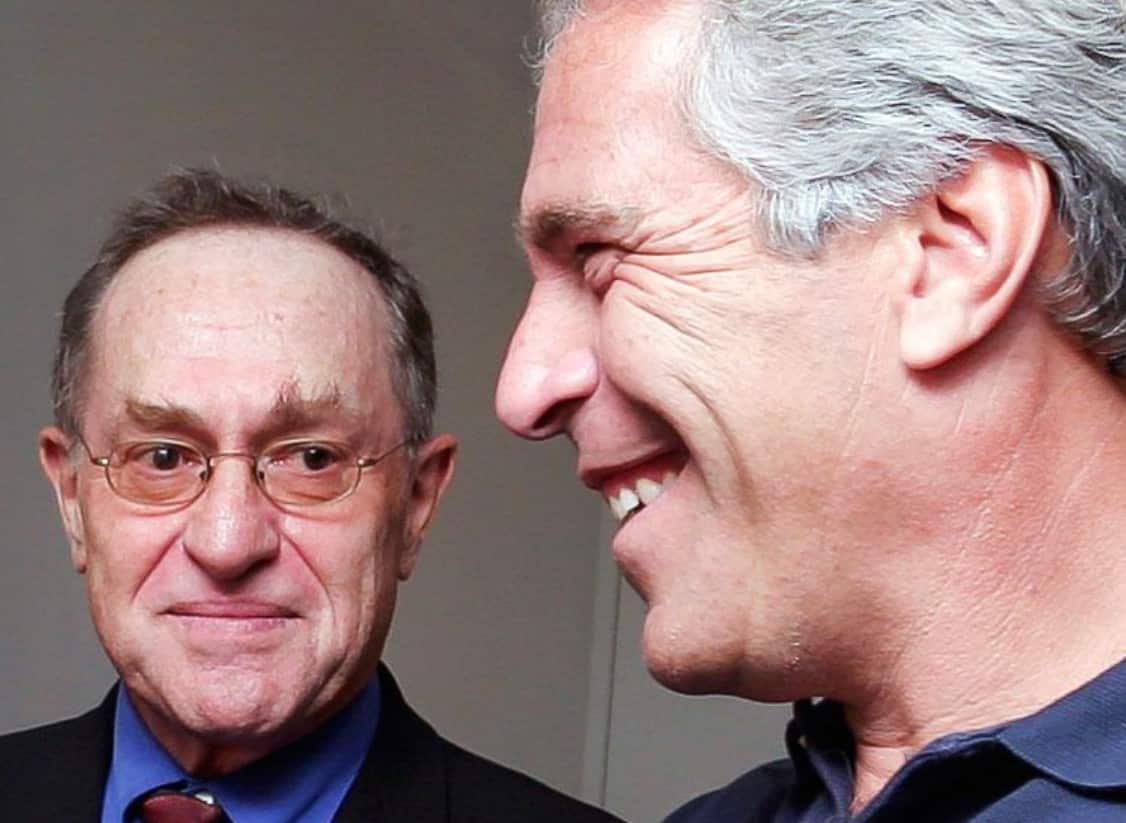 Lawyer Alan Dershowitz has urged “everyone” to “keep an open mind” about deceased billionaire paedophile Jeffrey Epstein’s long-term partner and alleged procurer of underage girls Ghislaine Maxwell, after she was arrested by the Federal Bureau of Investigation 2nd July.

Writing in The Spectator, Dershowitz – who represented Epstein, and played a decisive role in negotiating and securing the sex abuser’s extremely soft and highly controversial “sweetheart” plea deal in June 2008 – recalls how he and his wife were introduced to Maxwell by Sir Evelyn and Lady Lynne de Rothschild.

They subsequently met her on several occasions– “generally in the presence of prominent people such as Bill and Hillary Clinton, Nobel Prize-winning scientists, presidents of universities, and prominent academic and business people,” he’s curiously keen to stress – and on all those occasions “never saw her do anything inappropriate”.

The question of what Dershowitz witnessed Maxwell get up when not hobnobbing with “prominent people” is left unanswered, but he goes on to say that “like every other arrested person”, Maxwell “must be presumed innocent”, and ruing how “many in the public” will presume her guilty, in part due to how she was portrayed in Netflix’s ‘Filthy Rich’ series, which delved into Epstein’s innumerable crimes against humanity in some detail. He suggests “no one should believe anything they saw in that series”, as it was “based largely on the accounts of two women with histories of making dubious accusations”.

Alan Dershowitz (@AlanDersh) who has been accused of child rape and still given a platform by U.S. media outlets, and Harvard to speak or appear on panels as an expert, is now openly defending Ghislaine Maxwell, previously helped Epstein avoid prison. #OpDeathEaters pic.twitter.com/8GEWrqY8FF

​One of the women to which he refers is Virginia Roberts Giuffre, who brought a civil action against Maxwell in 2015, alleging she and Epstein had groomed her for sex, and prostituted her – while underage – to a number of Epstein’s ‘clients’, including Prince Andrew. While Maxwell denied the allegations, the case was settled May 2017 in her favour – details of the settlement haven’t been made public, but Maxwell reportedly paid out millions to Epstein’s victim, and a photo of Andrew and Giuffre, his arm furled round her waist, proves they did meet in at least some capacity.

After lambasting Netflix for not rubbishing his accusers’ reputations in the docuseries, Dershowitz goes on to implore readers to “keep an open mind about Maxwell”, just as they should “about others who have been accused by Epstein’s alleged victims”.

“The truth-testing mechanisms of cross-examination and confrontation must be employed against these witnesses, as they are against other accusers. Only after a full trial, in which both sides are presented should reasonable people come to conclusions about Ghislaine Maxwell,” he continues.

Dershowitz concludes the article on a jolly note, suggesting Maxwell’s lawyers may argue the Statute of Limitations has expired on these 20-plus year allegations, and  Maxwell is protected by Epstein’s original plea deal, which “expressly included Maxwell as someone who received immunity” – so even if his good friend is indeed guilty of heinous crimes, she could cheerfully still get off scott free on a technicality or two.

Dershowitz is well-placed to know the extraordinary terms of Epstein’s original plea deal, due to the pivotal part he played in securing it – and in a perversely ironic twist, by acknowledging Maxwell was “expressly included” as receiving immunity therein, the attorney inadvertently confirms she was one of the known co-conspirators in Epstein’s international sexual trafficking and abuse intrigue, which has never hitherto been disclosed.

Alan Dershowitz is a man who destroyed his own life *first and finally* with his own asinine unwillingness to keep his professional and personal lives separate, a *cardinal sin* for a criminal defense attorney Dershowitz should have recognized many years ago is *wholly his fault* https://t.co/4d7KklWIHJ

​Under the terms of the deal, Epstein was granted immunity from all federal criminal charges, as were four named co-conspirators – of which Dershowitz has now blunderingly revealed Maxwell to be one – and any unnamed “potential co-conspirators”. The affording of such sweeping, blanket insulation from justice to anyone, let alone an infinite number of people, is entirely unprecedented in the annals of American jurisprudence – just as shockingly though, in return for this unparalleled leniency, Epstein agreed to plead guilty in Florida state court to two felony prostitution charges, register as a sex offender, pay restitution to three dozen victims identified by the FBI, and serve just 13 months in a ‘luxury’ Palm Beach jail, with practically daily work release.

The agreement also served to shut down both Palm Beach Police and FBI probes into the scale of Epstein’s crimes, meaning the true number of underage girls sexually abused, and identities of other power individuals involved in Epstein’s conspiracy in any way,  will likely never be known – and moreover, then-Florida District Attorney Alexander Acosta agreed the deal’s terms would be kept secret from Epstein’s victims, despite federal laws to the contrary.

A federal judge later ruled prosecutors violated victims’ rights by doing so – in defending his actions, Acosta said he agreed to the lenient plea deal because he was told Epstein “belonged to intelligence”, was “above his pay grade”, and he needed to “leave it alone” as a result.
Acosta also described what he called a “year-long assault’’ on prosecutors by Epstein’s “army of legal superstars’’ – presumably including Dershowitz – who he claimed investigated individual prosecutors and their families, looking for “personal peccadilloes’’ to disqualify them from the case.

Dershowitz’ role in the initial Epstein case didn’t end there – Palm Beach Police Chief Michael Reiter and Detective Joseph Recarey, who launched the original investigation into his activities in March 2005, have since claimed he helped wreck authorities’ appetite for properly prosecuting his client.

​Between the probe opening and October 2005, when police executed a search warrant at Epstein’s home, Recarey had identified 21 possible victims, and by the time police had enough evidence to finally arrest Epstein on sex abuse charges, they’d identified 35 potential underage victims and were in the process of tracking down at least a dozen more.

“I was surprised at how quickly it snowballed. I thought at some point there would be a last interview, but the next victim would supply me with three or four more names and the next one had three or four names and it just kept getting bigger and bigger,’’ Recarey told The Miami Herald in 2018.
Before he was arrested, Epstein learned some of the underage girls he’d abused had spoken to police, and immediately hired Dershowitz to represent him. Epstein also at this time hired private investigators attempted to conduct interviews while posing as cops; picked through Reiter’s trash in search of dirt to discredit him; and followed his accusers and their families. In one instance, the father of one girl was run off the road by one of Epstein’s PIs.

Several victims said they were intimidated and frightened by Epstein and Sarah Kellen, his assistant and alleged scheduler of massages, who warned them not to talk to police.

Dershowitz flew down to Florida to meet privately with then-Palm Beach State Attorney Barry Krischer, which led to “shenanigans” Recarey had “never seen or heard of before”. He and Reiter claim Dershowitz went on to convince Krischer Epstein’s accusers wouldn’t be credible on the witness stand, providing the State Attorney with extensive dossiers on the girls in an effort to show they had troubled pasts.

Since when do we celebrate our nation's independence by defending sex traffickers? pic.twitter.com/HZ7SQUIwd9

​Recarey was present at some of the meetings, and recalls Dershowit showing him one of the victims’ MySpace profile, which featured a photo of her drinking a beer, while underage.

“Well, tell me what teenager doesn’t? Does that mean she isn’t a victim because she drank a beer? Basically, what you’re telling me is the only victim of a sexual battery could be a nun,” Recarey recalled.

These advances were nonetheless effective in respect of Krischer, and shortly thereafter “it became clear things had changed, from Krischer saying, ‘we’ll put this guy away for life,’ to ‘these are all the reasons why we aren’t going to prosecute this,’” Reiter alleges.

since alan dershowitz is trending, here's a thread of him getting absolutely demolished by norman finkelstein. he was humiliated so badly that afterwards he went out of his way to get finkelstein denied tenure and fired pic.twitter.com/La24HadKJc

​Epstein may well never have been subject to a second investigation were it not for the groundbreaking reporting of investigative journalist Julie K. Brown, who wrote a series of articles documenting just some of the unspeakable acts he committed, and how US authorities seemingly did their absolute level best to ensure he went unpunished.

Unsurprisingly, Dershowitz attempted both publicly and privately to discredit and intimidate Brown, for instance writing an open letter to the Pulitzer Prize committee, urging them not to award her for work.

“When you go after powerful people, you know that they are going to try to find a way to mess with you. [Dershowitz] must have said a million times, ‘I know you’re not going to tell the truth because you’re just aiming for a Pulitzer’. When I do this kind of work, it’s the farthest thing from my mind. I never thought this Epstein story would be as big as it’s turned out to be. Never. The thing that drives me is finding justice and telling a story people can relate to, because there are tons of vulnerable women who have gone through something like this. I think that’s another reason why intimidation doesn’t work. I’m not doing it so everybody loves me. I’m doing it because it’s an important story, and it needs to be told,” she explained.