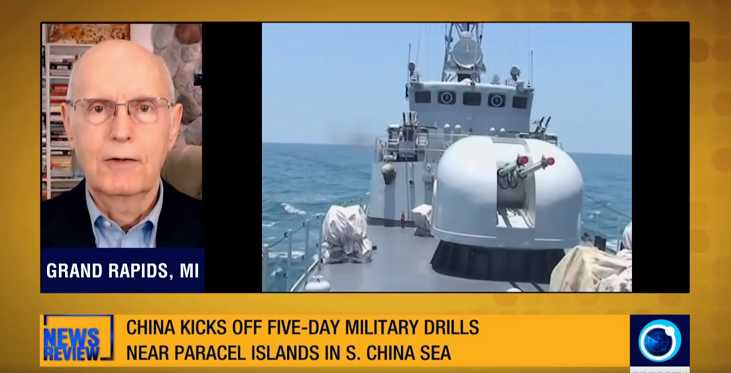 [ Note: The Navy loves deployments, as the ships and the men have to be kept working for the force to be in top shape. What I would describe as ‘conflict drills’ get a lot more media attention than doing them in the Atlantic or off the coast of Australia.

Carrier battle groups are complex operations and require constant training, with crew members being cycled through many stations to maintain combat readiness.

China will play along with the sparring game, getting some practice for its own growing navy, which will take another decade of work to have an effective defense. The US is reminding it that the Chinese navy could be gone in a day due to the US’s advantage in firepower.

The boomerang on that could be what we saw when NATO stiffed Moscow on its pledge not to move NATO into former Soviet states.

Russia went on a crash course to build its military with strong ground forces, a new state of the art weapons, and a nuclear retaliation capability as a shield to the US and NATO strategy of moving into advantageous, first strike launching positions inside Romania and Poland.

Bottom line, the US may be even less secure than it was when Russia was left with its older military, which had many problems logistically handling the Georgia situation. We woke Russia up with our continued advances toward the Russian border.

The defense contractors all thought it was wonderful, as they did with 9-11, some saying they saw a ten-year war on the horizon with lots of opportunities… Jim W. Dean ]

China has dismissed US criticism of its plan to hold military maneuvers in the South China Sea, saying the exercises are China’s sovereign right.

Beijing says certain non-regional countries travel a long way to conduct large-scale military activities and flex their muscles in the South China Sea. The Chinese government also stresses that such measures are the root cause of instability in the region.

The US has conducted multiple naval operations by sending its warships through the area. China kicked off five-day drills near the Zi-Sha Islands in early July. The Islands are claimed by both Vietnam and China.

The US, Vietnam, and the Philippines have expressed concern about the Chinese drills. The Pentagon said conducting military exercises over the disputed territory is counter-productive.