[ Editor’s Note: This report is missing key details, but understandably so, as Iran does not have a habit, nor anyone else, of broadcasting its air defense plan details.

But the move is overdue, as the public has sat back and watched an endless stream of Iranian supplies to be shipped into Syria and dispersed to a number of locations, with many far from the Israeli border, only to see them struck by Israeli air to ground missile barrages that have a demonstrated accuracy.

To date, despite Russia having air defense weapons that could take down the Israeli planes launching these missiles, it has not engaged them, with the Israelis’ role seeming to be that their planes do not cross into Syrian airspace, but launch over Lebanon or out to sea. Syrian air defenses have only managed to shoot one down while it was returning to its base.

Countries often want to test new air defense equipment under real war conditions, the only way to determine how well it can protect, and if it cannot protect, it is better to learn this on someone else’s territory rather than your own.

As with all countries, if you do not have competent air defenses, then you enter a war situation with one hand tied behind your back, better to wait for another day.

Along with testing missile hardware, if you do not have superior electronic counter measures, you can lose the battle anyway. We live in a time of full spectrum warfare, where one shortcoming can determine winners and losers, not the bravery of either side… Jim W. Dean ] 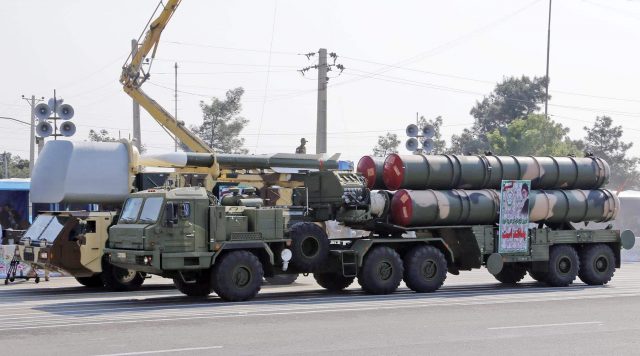 Iran will boost Syria’s air defenses, as part of a wider military security agreement between the two countries.

“We will strengthen Syria’s air defense systems within the framework of strengthening military cooperation between the two countries,” Chairman of the Chiefs of Staff of the Iranian Armed Forces Major General Mohammad Baqeri said on Wednesday after signing a “comprehensive” agreement with Syrian Defense Minister Ali Abdullah Ayoub in Damascus to boost military and defense cooperation.

The agreement provides for the expansion of military and security cooperation and the continuation of coordination between the Armed Forces of the two countries.

Speaking after signing the agreement at the headquarters of the General Command of the Syrian Army and Armed Forces, the top Iranian commander said the signed deal “increases our will to work together in the face of US pressure.”

“The people and countries of the region do not welcome the presence of the United States, and our response to the American prattling will continue,” Baqeri added.

On the Turkish military presence on Syrian soil, the Iranian commander said that Turkey is dragging its feet regarding the implementation of its commitments under the Astana agreements on the withdrawal of terrorist groups from Syria.

He said that Turkey must realize that the solution to any of its security problems is through negotiation with the Syrian side, and not through military deployment in the Arab country.

“If the American administrations had been able to subjugate Syria, Iran and the axis of resistance, they would not have hesitated for a moment,” the Lebanese al–Mayadeen television channel quoted the Syrian minister as saying.

He described Israel as a “powerful partner” of the US in the war against Syria, adding that terrorist groups constituted part of the Israeli aggression.

He also lambasted the so-called Caesar sanctions imposed by the US against his country, saying Syria will counter the bans barring the provision of foodstuff and medicine to its people.

He stressed that Syria that has maintained its government structure since 2011 and will undoubtedly emerge victorious out of the war.

The two sides also underlined the need for the withdrawal of foreign forces who have been “illegally” deployed to the Arab country in violation of international law and said the forces are the main obstacle to the complete cleansing of armed terrorist groups in some parts of Syria.

The heads of the senior military delegations of Iran and Syria also stressed that the agreement was the result of years of military, security and technical coordination and cooperation in various areas of joint fight against terrorism.

At the end of the talks, a joint statement was also issued by the high-ranking military delegations of the two countries, which said a continued battle against Takfiri terrorism supported by some regional and international powers is among the goals of the agreement.

They also stressed in the statement that the comprehensive military agreement was signed to implement the directives of the political and military leaders of the two countries to enhance their defense capabilities and promote self-reliance against any possible foreign aggression.

Iran and Syria have signed different military and defense cooperation over the past years.

Iran began providing Syria with advisory military assistance after numerous countries, at the head of them the US and its Western and regional allies, started funding and arming militants and terrorists with the aim of deposing Syrian President Bashar al-Assad’s government.

Despite initially losing considerable expanses of territory to Daesh and other terror outfits, the country, however, rallied with the help of Iran and Russia, another Damascus’ ally, and reversed the balance in favor of itself on the battleground.