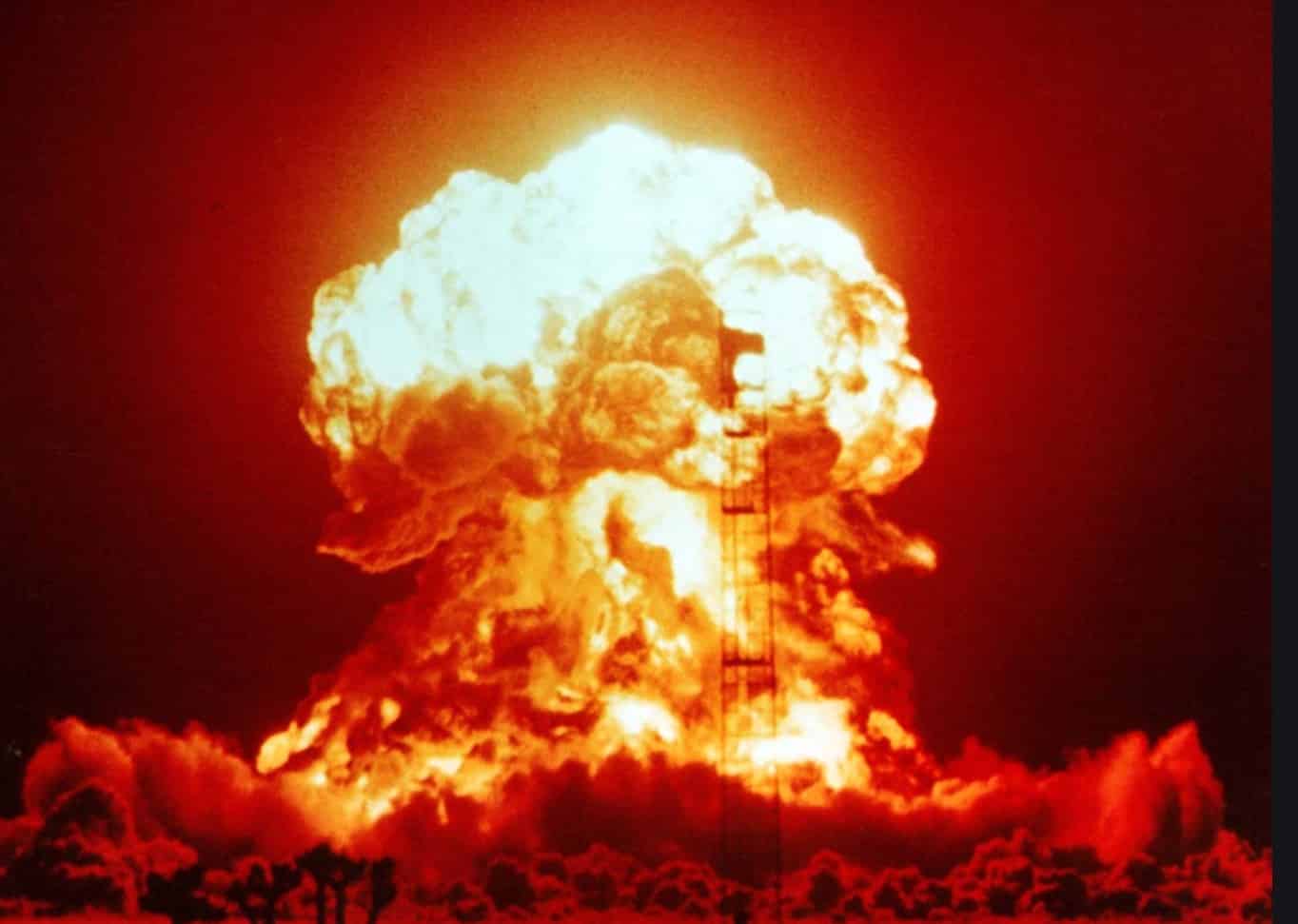 After the World War 11, nuclear weapons were never used, and were only employed as a strategic threat. During the heightened days of the Cold War, many crises arose in Suez Canal, Korea, Cuba and Vietnam when the United States and the former Soviet Union were willing to use atomic weapons, but they stopped because of the fear of atomic conflict which could eliminate both the superpowers. Therefore, they preferred to resolve their differences through diplomacy by following the doctrine of nuclear deterrence, popularly known as balance of terror.

But, case of South Asia is quite different where India has been ignoring the doctrine of nuclear deterrence.

In this connection, Indian ex-Army Chief, General Deepak Kapoor had stated on December 29, 2010 that the Indian army “is now revising its five-year old doctrine” and is preparing for a “possible two-front war with China and Pakistan.”

While tensions escalated between India and China and India and Pakistan in the past, yet this time, situation is very serious, as since Narendar Modi, the leader of the ruling party BJP, became Indian prime minister, he has been following fanatic policies internal and externally.

In this regard, on May 5, this year, drastic tensions arose between New Delhi and Beijing when in response to India’s construction of roads and airstrips adjacent to the Line of Actual Control (LAC), which will improve connectivity and enable easier mobility for Indian troops in the area, thousands of Chinese People’s Liberation Army (PLA) troops moved into the regions along the eastern Ladakh border, setting up tents and stationing vehicles and heavy machinery.

The Indian army moved several battalions from an infantry division usually based in the Ladakh city of Leh to “operational alert areas” along the border.

And acting upon the August 5 announcement of 2019, Indian central government had issued a map on October 31, 2019. In accordance with it, Jammu and Kashmir was bifurcated into two union territories—Jammu and Kashmir and Ladakh and identifies Pakistani side of Azad Kashmir as well as certain areas of Gilgit-Baltistan as an Indian territory.

Both Islamabad and Beijing had rejected the political map regarding the disputed territories.

Meanwhile, a storm sparked in India by the contradictory statement, issued by the Prime Minister’s office on June 19, 2020 that nobody had intruded across the Indian frontier in eastern Ladakh—continued for a clarification, leading to more questions by the Opposition.

The Congress said that the government has failed in clarifying, if Chinese troops were present on Indian territories. Even, some leaders of the BJP have criticized PM Modi in this regard.

India and China on July 6, this year seemed to be moving towards de-escalating tensions after a violent hand-to-hand clash between the two militaries at the Galwan Valley on June 15, 2020, which left 20 Indian soldiers dead. Indian National Security Advisor Ajit Doval spoke to Chinese Foreign Minister Wang Yi on July 5, 2020. Both leaders agreed on the need to ensure the earliest complete disengagement at LAC, working towards a stepwise de-escalation for the restoration of peace. They agreed to continue talks to reduce tensions which have been simmering for two months. Afterwards, Commander level talks held between New Delhi and Beijing.

Regarding the Sino-India accord, both sides issued separate statements which indicate differences in viewpoints.

In this connection, quoting Indian Army sources, Indian news agency ANI reported that Chinese Army has moved back tents, vehicles and troops by 1-2 km from locations where disengagement was agreed upon at Corps Commander level talks. But, Chinese heavy armoured vehicles are still present in-depth areas in Galwan river area.

The Indian statement said that “the two sides re-affirmed that both sides should strictly observe the line of actual control and should not take any unilateral action to alter the status quo and work together to avoid any incident in the future that could disturb peace in border areas.”

On the other side, the Chinese foreign ministry spokesman Zhao Lijian stated that “both sides had made positive progress…to disengage frontline troops and ease the border situation…China will continue firmly safeguarding its territorial sovereignty as well as peace and tranquillity in the border areas”—that the areas currently under Chinese control are non-negotiable.[as these are disputed territories].

India and China also held military-level talks on June 6, 2020 to resolve the current border issue in eastern Ladakh peacefully. But, a Colonel-rank officer and 20 soldiers of the Indian Army were killed and almost 76 injured in a hand to hand physical scuffle with Chinese troops in the Galwan Valley area of Ladakh on June 8. More than 90 Indian soldiers are missing. India also concealed this news and afterwards admitted when Beijing disclosed the incident.

Nevertheless, Indian opposition parties criticised the false statements of the Indian government, which concealed truth regarding the Sino-India agreement. In this context, the Congress insisted on restoring the status that existed on the borders before May 5. Congress leader Rahul Gandhi who earlier called the Modi as “surrender Modi” said on July 7, this year, “why India has not insisted on restoring status quo ante and why it did not mention territorial sovereignty over the Galwan Valley.”

However, despite the agreement and to continue talks to reduce tensions which have been simmering for two months, diplomatic and military talks will continue between New Delhi and Beijing.

Besides, India had escalated tensions with Islamabad particularly in the aftermath of the false flag terror attack at Puwama in the Occupied Kashmir (IOK). In this respect, on February 27, last year, in response to the Indian so-called pre-emptive air strike near the town of Balakot, close to the border with Pakistan’s sector of Kashmir, Pakistan Air Force (PAF) shot down two Indian Air Force (IAF) fighter jets and launched aerial strikes at six targets in the IOK.

In fact, PM Modi, BJP-led, RSS and VHP are implementing ideology of Hindutva ((Hindu Nationalism). Their various moves such as abrogation of the special status of the Jummu and Kashmir to turn Muslim majority into minority in the IOK, continued lockdown in the IOK, martyrdom of thousands of the Kashmiris there, introduction of new domicile law against the majority of Kashmiris, issuance of domicile certificates to 25000 non-Kashmiris,  persecution of religious minorities especially Muslims, anti-Muslim laws-CAA/NRC etc., and intermittent shelling inside Pakistani side of Kashmir in relation to the Line of Control (LoC) might be noted as instances.

As regards the India-Nepal confrontation, a new road opened by New Delhi which passes through the disputed territory has roused territorial dispute between the two countries. The link road connects Dharchula in the India state of Uttarakhand to the Lipu Lekh pass near the LAC–India’s border with China.

India and China have 3,500 kilometers long un-demarcated border which runs along Himalayas. There are three pressure points: the China-Sikkim border, Nepal-India border and the Ladakh region where there is a lake and river.

Reacting to his statement, Foreign Minister Shah Mahmood Qureshi stated: “Let me make it clear to Amit Shah that if India made the mistake, we will give a befitting response…Amit Shah should tell…Why does India not launch a surgical strike on Laddakh?…India has reached the extreme in committing atrocities in Kashmir…New Delhi is threatening Pakistan to divert attention from its internal situation”.

Earlier, the DG of ISPR Maj-Gen. Babar Iftikhar said: “Chief of Army Staff General Qamar Javed Bajwa warned India…[saying] We will respond any aggression with full might…Prime Minister Imran Khan and Chief of Army have said that India was planning false flag operation…Pulwama-II…India faced great humiliation in the recent military standoff with China…faced embarrassment in map issues with Nepal as well…India is facing many internal challenges especially after the emergence of coronavirus…many issues have emerged in India after the August 5, 2019 move, which revoked the special status of Indian Occupied Jammu and Kashmir…There is an emergence of Islamophobia in India. Now they [India] think the best way is to divert the attention towards Pakistan…The situation on the LoC…1229 ceasefire violations by India have been committed since start of this year…while their quadcopters have also violated airspace [Of Pakistan] on different occasions”.

Nonetheless, border tensions in Ladakh also occurred between New Delhi and Beijing in 2014 and in 2017 when they were engaged in a similar stand-off in Doklam plateau. The situation was later defused through diplomatic channels.

Notably, unless, Indian PM Modi restored articles 35A and 370 of the Constitution, tensions between India and China would remain, taking both countries to the edge of war.

The two countries also fought a brief war in 1962, which China won. If the Sino-India border dispute is not resolved through negotiations, it could result into all-out conventional war which may culminate into nuclear war. Same is true in case of Pakistan, as extremist PM Modi is not willing to have dialogue with Islamabad to settle the Kashmir issue. So, Modi’s risky strategy against China and Pakistan could ultimately, culminate into nuclear war either with China or Pakistan or with both the countries, enveloping the entire region.