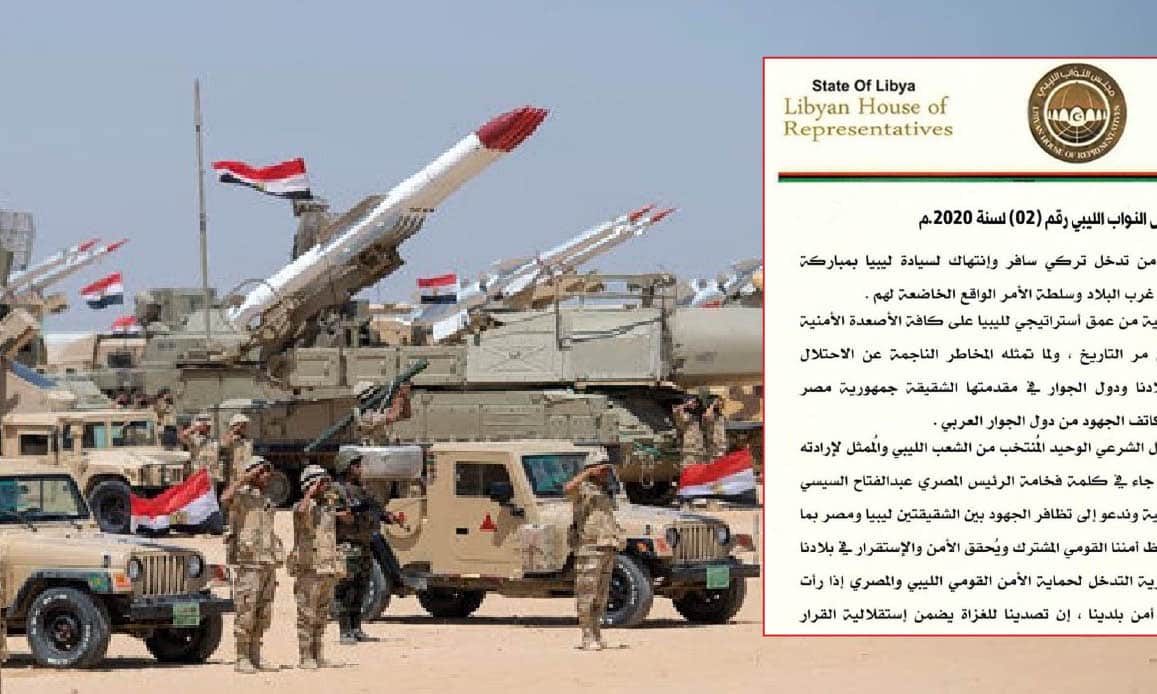 The civil war in Libya is about to become an international conflict that could destabilize not only Africa but the entire basin of the Mediterranean Sea. This may be very dangerous in particular for Italy and Europe already affected by continuous landings of migrants among which there would be many infiltrated jihadists as highlighted by previous Gospa News reports and also reported by the Egyptian diplomacy to the UN Security Council.

The Tobruk House of Representatives governing Cyrenaica (eastern Libya around Benghazi) released a few hours ago an official note reported on Twitter by various analysts of the Libyan crisis, including military expert Mahmoud Gamal and journalist Mohamed Mansour, in which it «declares that the Egyptian army has the right & authorization to militarily intervene in Libya if necessary, to protect the national security of both Egypt & Libya».

This occurs when other sources have released videos on the reinforcements sent by the Libyan National Army (LNA) of Marshal General Khalifa Haftar, Benghazi military leader, in support of Sirte, the strategic city of the homonymous gulf rich in oil, threatened by the advance of the mercenary militias employed by Turkey in support of the Government of National Agreement (GNA) which through President Fayez Al Serray controls Tripoli and Tripolitania.

In the past few days two other heavy LNA counter-offensives have occurred after the military successes of the opponents supported by Ankara in a plan not only tolerated but also politically supported by NATO, of which Turkey is the second military force, as candidly admitted by the Italian ambassador to Libya.

General Haftar has blocked the ports of eastern Libya controlled by his army for the umpteenth time to trade in oil, as alarmingly highlighted by the Arab media Al Jazeera which is financed by the government of Qatar and therefore secretly supports the intervention of the Jihadists and Turkish troops.

«LNA spokesman Ahmed Mismari on Saturday said in an online statement the country’s oilfields and ports are “closed until the orders of the Libyan people are implemented”, laying out conditions to lift the blockade – wrote Al Jazeera – Renegade military commander Khalifa Haftar’s self-styled Libyan National Army (LNA) has said it would maintain a blockade on oil production and exports that the National Oil Corp (NOC) says has cost the country $6.5bn in lost revenue».

Further, on July 5, the small LNA air force, equipped with some fighter bombs manufactured in Russia (Haftar ally like France) bombed the strategic airport of Al Waitiga, near Tripoli, recaptured a few weeks by the GNA Army and therefore protected by Ankara’s HAWK anti-aircraft systems, which were hit in the air raid.

«The situation in Libya remains bad, we continue to see open violations of the embargo, we intend to strengthen the sanctions regime for a better implementation of the United Nations Security Council resolution, which would also increase the effectiveness of our Irini operation».

This statement was issued by the High Representative of the European Union Josep Borrell at the end of the meeting with the foreign ministers, a few hours before the Government of Tobruk (Libyan House of Rapresentatives) issued its press release which opens the doors to the intervention of the Egypt with the risk that Tunisia and Algeria will instead take sides with the government of Tripoli, creating a tremendous war scenario at 260 nautical miles from Sicily, leading to Italy and the EU.

«Turkey’s unilateral actions, especially in the eastern Mediterranean» with illegal drilling «must end» and there has been a call to Ankara to find «a political solution» for the Libyan crisis «in the spirit of the Berlin process», he Borrell explained at the end of the meeting with EU foreign ministers.

The Rome declaration is with another tenor: because it is in the embarrassing situation of giving a “diplomatic” sense to the close alliance in the field of the war market between Italy and Qatar, the main supporter and financier of the action of the Turkish President Recep Tayyip Erdogan in Libya,. as demonstrated in previous reports.

In particular in the one on the Weapon’s Lobby and the one on terrorists Hayat Tahrir Al Sham (formerly AlNusra – AlQeada) treated in the Italian military hospital in Tripoli.

Foreign Minister Luigi Di Maio takes a stand on the situation in Libya. «The Italian geostrategic assets in Libya must be defended with teeth» the minister said in an interview with the newspaper Il Foglio  as reported by the Italian Journalism Agency with an implicit reference to the GreenStream pipeline and the ENI extraction platform in Sabrata.

«Our goal has always been to create a comprehensive political solution for the Libyan parties, condemning the use of military action. For this reason, in recent months we have had dialogue as the only tool for political initiative, and to do this we have had to keep the channels of communication open with all the Libyan parties. But this should not be confused with equidistance».

Just today in Rome the spokesman for Tobruk’s parliament Aguila Saleh will meet the Italian authorities in search of desperate mediation after the House of Representatives of Cyrenaica, in the last weeks, had de-legitimized the announcement of Haftar’s coup in the hope of finding a peace agreement with Tripoli but only getting a short truce and an even more brutal response from GNA and Turkey troops, supported by Deep State NATO, as demonstrated in a previous investigation.

What does not seem to worry the unconscious Italian government of Prime Minister Giuseppe Conte (supported by the Democratic Party and by the 5 Star Movement) is the alarm for the landings of migrants, some also positive for Covid-19, which have intensified with the beautiful season and after the reconquest of the strategic port of Sabrata by GNA.

«At the moment they are ready to leave from the Libyan coasts between 5 thousand and 7 thousand migrants, but they represent only the tip of the iceberg», explains a source of the newspaper Il Giornale in Tripoli in an article signed by the war reporter Fausto Bisloslavo, a very expert in African scenarios and Middle Eastern.

«According to IOM, the rib of the United Nations, at the end of June 625,638 migrants were in Libya. Not all of them will flock en masse to Italy, but it is estimated that in the next few months at least 20,000 migrants are in the hands of human traffickers or who work with slave labor with the aim of collecting money to embark for Italy» reads on Il Giornale.

«Despite the stop of Covid, the end of the siege of Tripoli and the beginning of summer marked a surge in arrivals in our country. To the 8194 registered until yesterday, the 5775 intercepted by the Libyan coastguard from January to the end of June and brought ashore must be added. Last year, in 2019, just 3871 had arrived. In the first 12 days of July, about 1300 landed. In the same period, another 500 were stopped by the much criticized Libyan coast guards, who do the dirty work for us – adds the Italian journalist Biloslavo – Once brought back to earth the migrants are refreshed by the IOM and largely left to go ending up again in the perverse mechanism of human traffickers. Government detention centers run in fits and starts».

Italian Interior Minister Luciana Lamorgese has announced a trip to Tripoli to meet her counterpart Fathi Bashaga but the risk of a military escalation can jeopardize any slow and cumbersome diplomatic effort due to the illegal situation now created with the arrival of the jihadist factions led by former ISIS and Al Qaeda commanders and paid for by Ankara.

«The thousands of migrants ready to board are located mainly east of Tripoli in Garabulli and al Qoms and from the west between Zawhia and Zwara», explains the source of the newspaper. The catchment area of ​​the traffickers, mostly in the camps under their control, is around 20,000 migrants for this summer and as long as the weather conditions will allow them to cross the Mediterranean» explained Biloslavo.

«After the government advances, the old traffickers of men returned mainly from the Tripoli coast to Tunisia and there is no lack of new levers who smelled the business» says the Tripoli source. The best known is Ahmed al-Dabbashi called “Ammu” (uncle).

«The UN had sanctioned him as one of the biggest human traffickers. And now he has returned to Sabrata thanks to the victory of the Serraj government guaranteed by Turkish military support. Even Al Gospi, another boss, has reappeared on the coast west of Tripoli» the journalist points out in perfect harmony with what was claimed by the Haftar army.

«We have a huge archive of documented crimes and abuses committed by militias», said Al-Mesmari, adding that LNA forces will continue to perform «their duties in the fight against terrorism and the fight against crime».

After seeing how many attacks, brutal murders, rapes and raids have committed the jihadists paid by the Turkish President Erdogan in Rojava (North East Syria) and in particular in Afrin with the complicity of former leaders of ISIS and Al Qaeda, many of the as brought to Libya, we have no doubt in believing the words of Haftar’s spokesman. And in thinking that the general of Cyrenaica, at this moment, is probably the “lesser evil” for Italy and Europe.

This consideration also comes from the fact that in recent days a large amount of amphetamines, used by jihadist suicide bombers to overcome the inhibitory brakes in their terrorist acts, has been seized in Salerno …