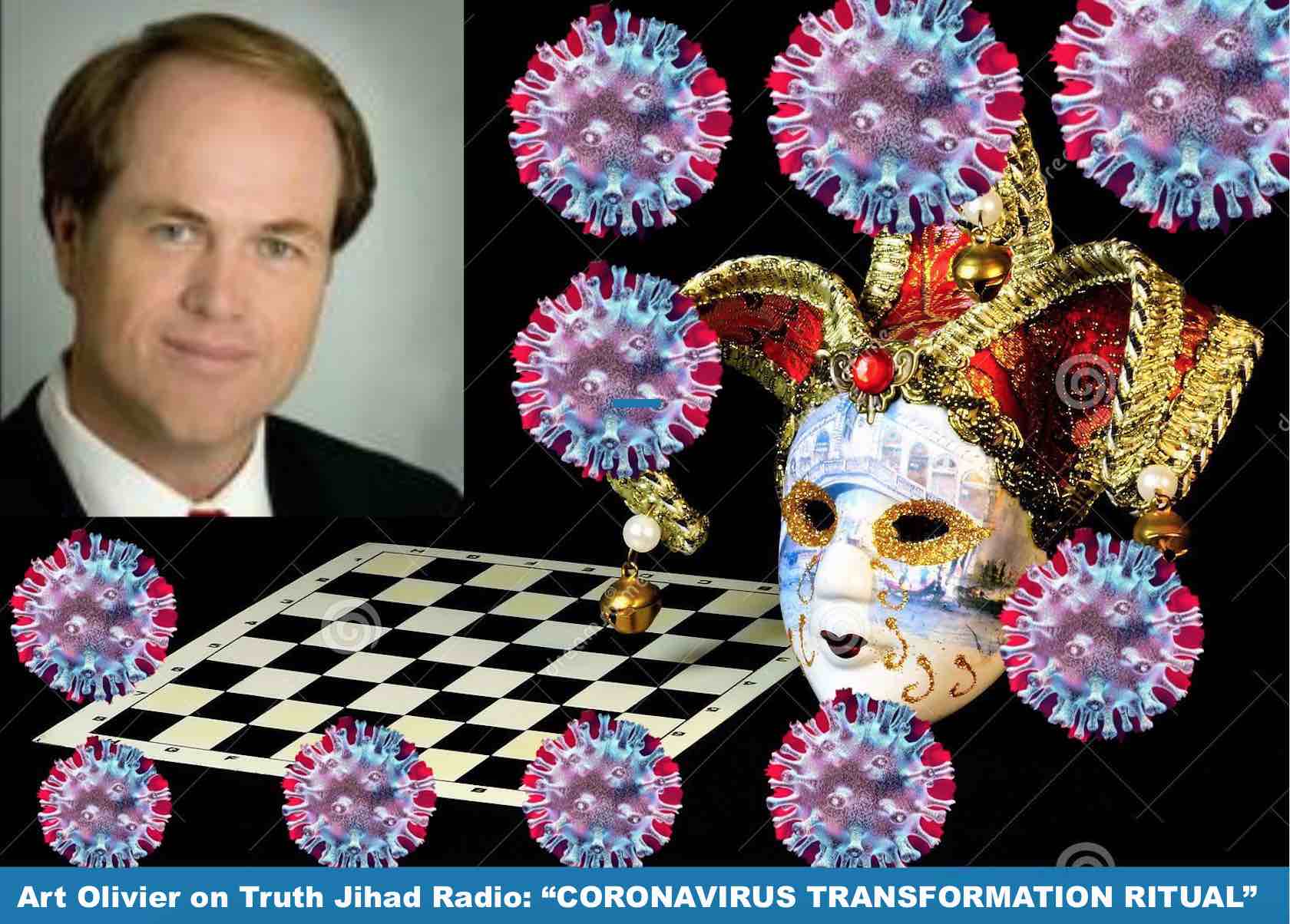 Secret societies have used initiation rituals for millennia. The goal is to transform the initiate into a useful member of their society. Whether it is the Mafia, Freemasons or witches, the process is similar; the initiate is separated from his normal day-to-day routine. He is told where he can go and what he can do. His mind is cleared of his previous life and he is forced into a new normal. The director of the ritual controls what the initiate perceives by controlling information and repeating certain phrases.

The news uses repetition in convincing us that we must conform to a new normal as well as the current TV commercials that repeat a variation of “In these uncertain times, while the distance between us has grown, we can still stay connected in the safety of our home. We can all get through this together.”

The initiate may be required to sacrifice things he once held dear in order to receive the transformation.  The pandemic is forcing us to sacrifice our personal and economic freedoms.

The Encyclopedia of Witches, Witchcraft and Wicca states “Initiation is a rite or Ritual that marks the psychological or spiritual crossing of a threshold into new territories, knowledge, and abilities. Initiation brings a sense of attainment and accomplishment and effects subtle changes deep within the psyche in terms of how an individual perceives herself or himself. The central theme to initiation is suffering, death, and rebirth. The initiate undergoes an ordeal, symbolically dies, and is symbolically reborn as a new person, possessing new wisdom.”

Masks are quite often required during a ritual to help create a new identity. From ‘Studies in Humanities and Social Sciences, Volume 11, Indian Institute of Advanced Study, Shimla, 2004, Ritual, Masks, And Sacrifices’, “Ritual is intimately connected with the mask, either in the wearing that hides the true face, or in the adoption of a public face. The mask makes the disengagement from ordinary time and the connection to the ancient and repetitive, which is the heart of ritual, psychologically acceptable. Together, ritual and mask facilitate the apprehension of identity and its connections with paradox by placing the mystery of change outside of life’s ordinary reasonableness into the domain of magic and power. This change and transformation is enacted by the sacrifice of the ritual.”

To help facilitate the rebirth, the fear of death is introduced in the ritual. The initiate is purposely kept in a state of confusion, becoming dependent on the director to show him the way forward. We are told many contradictory statements such as; death rates are up, deaths are down, wear a mask, masks won’t protect you, hydroxychloroquine will cure you, hydroxychloroquine will kill you, stay home, businesses are opening, infections are rising, a second wave is coming. In this confusion, we become dependant upon our leaders to tell us what we are supposed to think. Eventually the old self withers away and the director molds the identity of the initiate to assimilate him into his new reality.

The George Floyd incident was a ritual in a ritual. He was out of work because of the Coronavirus. He is shown standing next to a Corona poster and the medical examiner said he had Coronavirus. The protests in his honor didn’t spread the virus, but maybe they did. We’ll just have to watch the news for the latest.

George Floyd’s chest is a big tattoo of the Masonic Double-headed Eagle of Lagash. If Floyd were a Mason, he would have attended The Most Worshipful Prince Hall Grand Lodge of Minnesota. Part of the Master Mason ritual is the Brethren praying on one knee around the body of Hiram Abiff. The lodge is a half-mile on the same 38th Street where Officer Chauvin, the Chauvinistic One, confronted Floyd.  3 minutes after arriving on the scene, Officer Chauvin placed his left knee down and held his Masonic pose on George Floyd for 8 minutes. The Chauvinistic One’s ritual lasted 11 minutes. Then Abrahadabra; the whole world is genuflecting, kneeling with one knee.

Abrahadabra, everyone is kneeling!

The 11 minutes on 38th Street is an important part of the ritual. In the center of the United Grand Lodge of England is a black and white floor with 418 squares, 11 on one side and 38 on the other. The address for the Minnesota Prince Hall lodge is 310 E. 38th Street. Zeros mean nothing in gematria. 31 is the 11th prime number. 11×38=418.

Aleister Crowley said “the key of the rituals” is “Abrahadabra” which equals 418 in Hebrew Gematria. Crowley said that ‘Liber 418’ was his second most important book after ‘The Book of the Law.’ The 11 (3+8) minute ritual on 38th Street gives us 418.

The 11 letters of Abrahadabra represents the uniting of the macrocosm with the microcosm represented by the hexagram and the pentagram, the 6 and the 5. Abrahadabra has 6 consonants and 5 A’s. George Floyd has the 6 and the 5 in his name, as does Donald Trump and Corona Virus.

Perhaps world leaders are trying to implement the biblical prophecy of the First Horseman of the Apocalypse that is given a corona and uses his bow to spread pestilence around the world. (He rides a white horse; the pale horse comes later.) It may be more than a coincidence that the first case of Coronavirus was identified on 12/12 (6+6/6+6), exactly 6666 days after 9/11/2001 and that Congress introduced H.R.6666, the COVID-19 Testing, Reaching, And Contacting Everyone (TRACE) Act.

The transformation may not merely be psychological, it may also be physical. Moderna (stock symbol MRNA) is developing a vaccine with mRNA that may complete the transformation. The military already has a contract with ApiJect for Coronavirus syringes. ApiJect has an optional RFID/NFC tag on each syringe so its serial number as well as the GPS location and the time of the vaccination can be uploaded to a government database. Perhaps if a contact tracer discovers that you have not received your Coronavirus vaccine, the military might show up at your door to ensure that you complete your transformation.