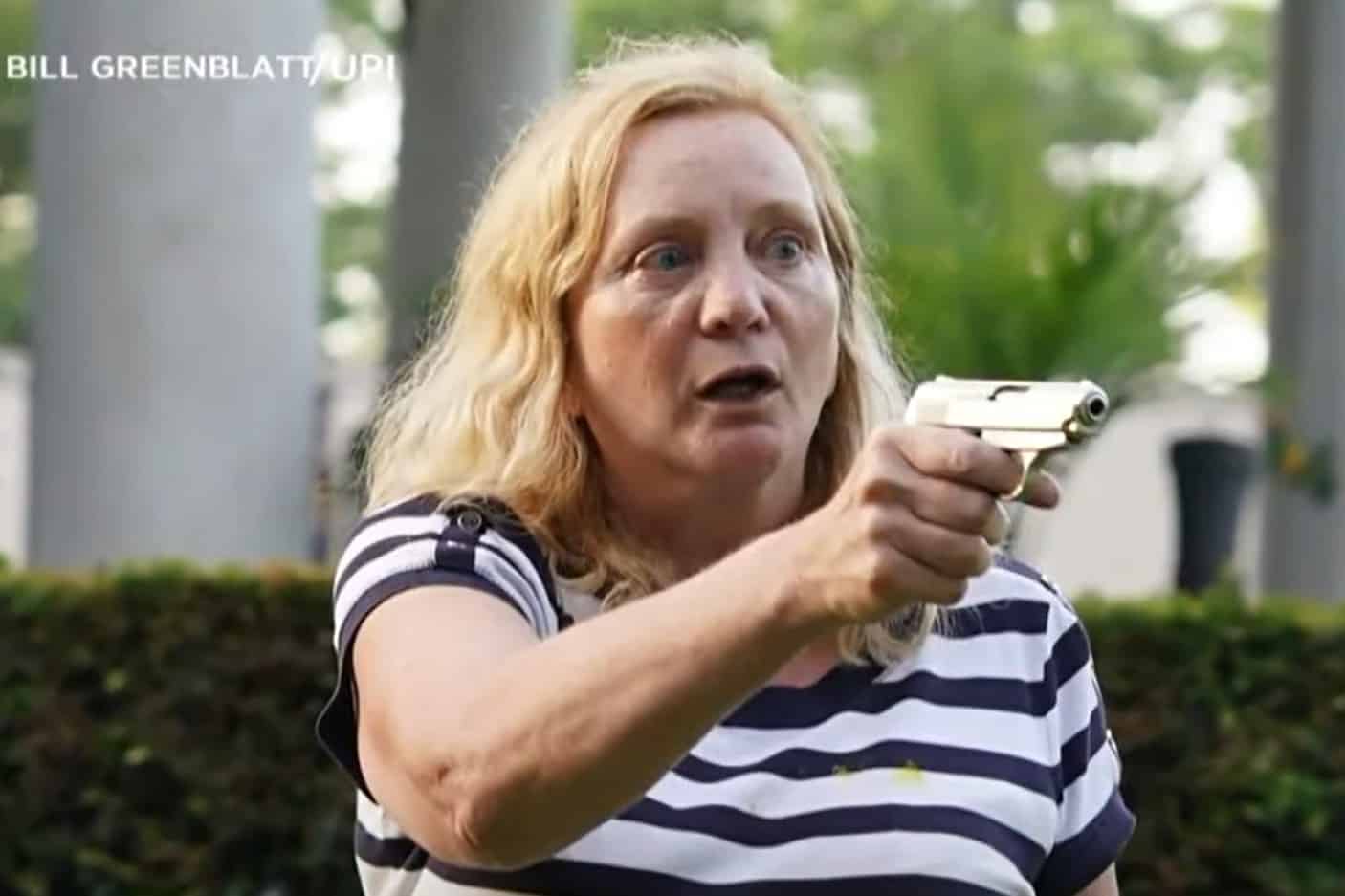 VT: We aren’t so sure about these folks. They live in a very restricted neighborhood and their neighbors, according to reports, hate them.  Is that bad?

They own a mansion built by beer baron cash, a really wonderful home.  They would be home free, despite their stupidity, were it not for Trump latching onto them and the fact that Shitstain Trump is going down for the 3rd time and taking everyone around him down as well.

The Shitstain Trumptard army is now claiming it’s all a George Soros plot, and that the demonstrators were really armed, citing as you will see below, a photo of a microphone that is secretly an Israeli assassination weapon. (See that Kevin Costner film)

Missouri’s attorney general is seeking to dismiss felony gun charges brought against a husband and wife who aimed firearms at protesters outside their St. Louis mansion, insisting the couple had a right to defend their home.

State AG Eric Schmitt took to Twitter on Monday night with a video statement and a lengthy series of posts, arguing the case against Mark and Patricia McCloskey – which included a felony firearms charge as well as misdemeanor assault – “threatens to intimidate and deter law-abiding citizens from exercising their constitutional right of self-defense.”

“The right to defend one’s person, family, home and property has deep roots in Missouri law. Self-defense is the central component of the right to keep and bear arms, which receives the highest protection from the MO Constitution,” wrote Schmitt, adding that he’d filed a pair of briefs to dismiss the charges.

In fact, this political prosecution sends a powerful and dangerous message: You exercise [your] right to keep and bear arms at your own peril. If you do, you may find yourself in prison.

Guardian: A white couple who pointed guns at protesters marching against racial injustice outside their mansion will face criminal charges, the city’s top prosecutor announced on Monday.

Mark and Patricia McCloskey, both personal injury attorneys in their 60s, will be charged with felony unlawful use of a weapon and a misdemeanor charge of fourth-degree assault.

“It is illegal to wave weapons in a threatening manner – that is unlawful in the city of St Louis,” the circuit attorney Kim Gardner told the Associated Press on Monday, arguing that the couples’ actions risked creating a violent situation during an otherwise non-violent protest.

The McCloskey's have not been treated like they are American citizens! Something is wrong here.https://t.co/5S03uOk2Mc

“We must protect the right to peacefully protest, and any attempt to chill it through intimidation will not be tolerated,” Gardner said in a statement.

Check out this fake tweet, trying to tell us a microphone is a gun:

Check out the things she let happen during the Micheal Brown killing in Ferguson, mo. She even walked with BLM. And also a member of BLM pulled a gun on Mrs. McCloskey but the fake news didn't show that! pic.twitter.com/8FHnogYETq

While the prosecutor who announced the charges against the McCloskeys said she was “open to recommending” that the McCloskeys participate in a diversion program designed “to reduce unnecessary involvement with the courts”, the case is likely to fuel continued partisan debate over gun rights and racial violence. Supporters of the McCloskeys said they were legally defending their $1.15m home. (Where I live, that home would be $5m.  Perhaps they are undertaxed, undervaluated?)

➡️ “The couple, Mark and Patricia McCloskey, were charged on Monday by the Circuit Attorney’s Office in St. Louis with unlawful use of a weapon, exhibiting. The charge is a Class E felony that carries a possible penalty of up to four years in prison.” https://t.co/PbnrSZj986

An attorney for the couple, Joel Schwartz, in a statement called the decision to charge “disheartening as I unequivocally believe no crime was committed”.

St Louis, like many cities across the country, has seen demonstrations in the weeks since George Floyd’s death in Minneapolis. The incident in question took place on 28 June, when several hundred people were marching to the home of the Democratic mayor, Lyda Krewson, a few blocks from the McCloskeys’ home.